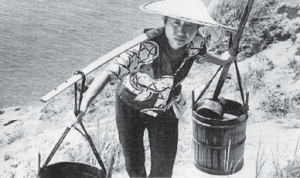 Two great figures of Japan’s post-war cinema will be celebrated in an exhibition at the BFI Southbank, running until the 30th of July. It will be a good opportunity to discover their best movies.

In Great Britain at least, a memorable anniversary in the history of Japanese cinematography has been overlooked. Very little was said in France either about the 22nd of April 2012, a historical date that marked the 100th birthday of film director Shindo Kaneto! Alas, Shindo died shortly afterwards on the 29th of May. Although generally renowned only for being the director of a single movie, The Island (Hadaka no shima, 1960), since 1951 Shindo had actually directed over 45 movies, finishing with his last and most well known film, Ichimai no hagaki [Postcard], shown at the Tokyo festival in 2010. The Island has his fifteenth film and demonstrated his international recognition when it was unexpectedly awarded the best movie prize at the Moscow International Film Festival in 1961. The movie’s soundtrack by Hayashi Hikaru was also part of its success, a haunting melody in a film that is close to being totally silent. The director patiently and poetically describes the laborious everyday life of a family of peasants throughout the seasons, on an arid little island in the Inland Sea, using beautiful black and white pictures. The Island remains one of the outstanding classics of a great era in Japanese cinema and it was the turning point in Shindo’s career. In reality, he was already known to Western reviewers for one of his first movies, Children of Hiroshima (Gembaku no ko, 1952), in which he explicitly describes the fate of children after the atomic bomb was dropped over the city of his birth. Shindo started out as assistant to one of his great mentors, Mizoguchi Kenji and experienced all of post-war Japanese cinema, from Toho to Shintoho to toho, especially during the period when he was politically engaged and affiliated to the communist party. Shindo was the scriptwriter for a few dozen movies in the 1940s, most notably collaborations with his colleague Yoshimura Kozaburo with whom he would go on to later found an independent company called Kinda Eiga Kyokai (The modern film society) in 1950. This gave him the impetus to undertake independent productions and direct some socially engaged, polemical movies such as Shukuzu [Life of a Woman, 1953], Okami [Wolf, 1955] and Daigo Fukuryu maru [Lucky Dragon No 5, 1958]. The latter film became almost as well known as The Island and is a true story about a fishing boat that was irradiated after American nuclear tests on Bikini Atoll. Thanks to the BFI, you can now watch some of Shindo Kaneto and Yoshimura Kozaburo’s most beautiful movies. Less well known than his Kindai Eiga Kyokai partner, Yoshimura’s own career started in 1929 at the Shochiku company. His debut as a director dates back to 1934 but even after this he was still just assistant director to Ozu Yasujiro and Shimazu Yasujiro and it was the movie Danryu (Warm Current), released in 1939, which finally started to build his own reputation. His film Anjoke no butokai (The Ball at the Anjo House, 1947), starring famous actress HARA Setsuko, was awarded Best Film of the year in 1947 by the renowned film magazine Kinema Junpo and this film marked the beginning of Yoshimura’s long relationship with Shindo. Yoshimura directed over 60 movies in total, including Itsuwareru seiso (Clothes of Deception, 1951) and Yoru no Kawa (Undercurrent, 1956) and he too played a great part in post-war Japanese cinematography. We can only thank the BFI’s initiative, which allows us to watch and re-watch Shindo’s Onibaba (1964), Yabu no naka no kuroneko (Kuroneko, 1968), or Fukuro (The Owl, 2003) and Yoshimura’s Osaka monogatari (Osaka Story, 1957), Onna no saka (A Woman’s Uphill Slope, 1960), and Echizen take ningyo (Bamboo Doll of Echizen, 1963) . This is one season not to be missed!