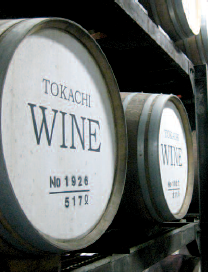 For approximately 50 years, Château Ikeda has been building a solid reputation with its wine.

On arriving in Ikeda on the Nemuro line, 250 kilometres southeast of Sapporo, your attention is caught by a huge concrete building rising above the station. On a grey, cloudy day, it is enough to get horror afficionados fantasizing. The building looks like a huge prison without any windows, and for a minute you wonder why on earth you have stopped here. You cannot recall Ikeda being known for its prison, the way Abashiri is. No, Ikeda’s celebrity stems from its vineyards, and that is the reason you came here. When leaving the station, a little sign points towards Château Ikeda, just 19 minutes walk away. The enormous grey building is still on your left-hand side, and after following the map, you realize that this is actually Château Ikeda itself. The concrete turret you thought was a watchtower is in fact the reproduction of a castle tower. As you get nearer you discover the only spot of colour to be seen on the giant concrete wall: a big wooden door resembling that which a fortified castle would have. This building is in complete contrast to the Bordeaux chateaux, those grand bourgeois houses. Ikeda’s architect must have used an illustrated dictionary to base his plans on a fortified castle rather than Versailles. Nevertheless, the incongruous architectural style actually suits this unlikely vineyard, situated, as it is, in a region where it snows throughout the very cold winters. It is understandable why Yamanashi prefecture, southeast of Tokyo, started producing wine. However, the idea of planting vineyards in Hokkaido is less understandable, and seems rather out of place at first. “Not at all,” says Saito Akihiko, the cellar master. “It snows around here, but the grapes don’t grow in winter. It’s very sunny the rest of the year, and the soil is great,” he adds. The idea of starting wine production here goes back to the 60s. After a violent earthquake hit the region and the Japanese government paid compensation, the local officials debated what to do with the money. One of them suggested planting a vineyard and starting to produce wine. “There were cheese producers in this region. Maybe they wanted to have his own wine to go with the cheese,” suggests Master Saito. So the first vineyards were planted, and the first bottles of wine produced in 1963, about 50 years ago now. Since then Hokkaido has developed into a wine producing area. Château Ikeda is also a research centre that focuses on improving the quality of the wine because, needless to say, it is not yet comparable to Japan’s best wines. Master Saito has travelled to France several times to perfect his knowledge and so produce better wine. “It takes time,” he says, “but it is starting to pay off. We are improving our production, and we have also started producing brandy.” He is confident because little by little, Tokachi’s wine is gaining recognition. “The” Japanese are now starting to drink wine with their meals. It’s still limited, but the habit is spreading, and we produce very acceptable table wine to satisfy them.” Many visitors come to have the details of the local produce explained to them in the great hall of Château Ikeda. Some of them already have two or three bottles in their shopping baskets…and they just might add a few more.