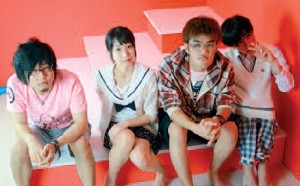 From left to right, Mono, Misako, Chibagin and Noko. The four members of Shinsei Kamattechan.

Could you tell us about the band ?

Mono : There’s Noko (guitar, vocals), Chibagin (bass guitar), Misako (drums) and me (keyboard). I’ve known Noko and Chibagin since kindergarten. Misako teamed up with us after we published an ad on the internet. We were then discovered in Chiba [a little town situated East of Tokyo] before arriving where we are today.

Kamattechan is often presented as an okatu band. Is that true?

M. : That is very true. Kamattechan’s mentality is very different from most Japanese bands, and we have always been very active on the internet. Most of our songs are available on the internet. And we prefer to stay at home rather than going out in public, so being called okatu is quite appropriate.

Was growing up in the suburbs important to you?

M. : I don’t think living in Chiba has had an influence on our songs. I think they’re closer to a diary in which we express our feelings and talk about all kinds of experiences that aren’t always positive.

Does distributing your music on the internet have something to do with declaring your independence from the system?

M. : You can’t count on CD sales anymore. A band can’t count on just its music production. We started putting our songs online because we saw that other bands were doing so, and it seemed to be a good idea.

You also give a lot of importance to public performances…

M. : Indeed. It’s very important to us because it’s a good way of being in contact with our fans.

How do you see the future of Japanese rock?

M. : Unlike what is going on abroad, I have the impression that most Japanese bands have a better sense of melody and are more interested in this aspect. That is why I believe they will have trouble pleasing a society that is getting tougher.