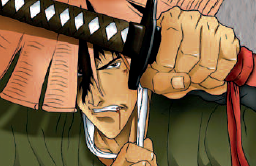 A village is ravaged by plague. The ninja Kagero escorts a troup of soldiers that have been sent to investigate but very soon, Tessai, one of the 8 demons of Kimon, attacks them. Only Kagero survives, saved by Jubei Kibagami, a lonesome samurai. Dakuan, a government agent, has ordered him to get rid of all 8 Kimon demons and Kagero offers her assistance. However, Jubei progressively comes to realise that his leader is no other than his worst enemy, Himuro Genma, whose goal is to take over Japan. Such is the tale of Ninja Scroll, an animation movie directed by Yoshiaki Kawajiri. An exciting film whose main character is inspired by Yagyu Jubei Mitsuyoshi, considered to be the best Japanese swordsman of all time.