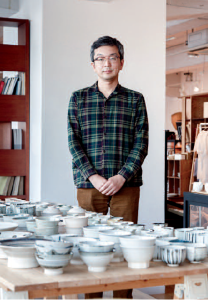 After having been a buyer for the designer shop idée, Ôkuma Takeo worked for Tsubasa no ôkoku, ana’s inflight magazine. He is now director at Claska where he showcases craftwork.

What is your definition of mingei?

Okuma Takeo : It’s a very difficult question to answer. In Yanagi Sôtesu’s time, and those who started the mingei movement, the word meant “beautiful” objects made by anonymous craftsmen. But over time, it has gained a more general meaning. It’s not only about objects made by anonymous craftsmen anymore. The word also included ceramists or painters who were part of the movement, such as Hamada Shîjo and Munakata Shikô. I understand what Yanagi and the other members of the movement were trying to defend. Now it is rare to come across objects that correspond to that original meaning. So I believe that we need to adopt the opposite approach to Yanagi and his friends who said in relation to artefacts that, “this is mingei”. Now we need to say, “this isn’t mingei”.

The Japanese seem to have a renewed interest in mingei. What do you think about this?

O. T. : I believe there is an increasing interest in craftwork in general, and not just for mingei. In a certain way, mingei has become a generic word. The Japanese passion for craftwork can be explained in different ways. But I think that, above all, it is a reaction to globalisation. The homogenisation of our society in great part related to the development of communication and information tools, encourages many people to take more interest in what is local. That is why handicrafts
are interesting. This trend is also developing in other places around the world. The 2008 financial crisis is not a stranger there either. Luxury products or designs have become less attractive to us and we have fewer means to make the most of them. There is a need to make the most of life and simple things rather than dream of objects you will never possess. Mingei and craftwork in general find meaning in this environment. Lastly, our digital society and the prominence of the virtual also encourage people to turn towards “analogue” goods and values. This leads to their rediscovery of mingei and craftwork to satisfy all five of their senses.

What does your job at Claska consist of?

O. T. : I’m the director. That includes the management of all the shops, the products we buy, the organisation of the exhibitions and their administration. Originally I dealt with interior architecture. And one day, I was asked to work on redesigning Claska. That is when I decided to develop a shop. Personally, I’ve always been interested in objects from abroad. Even though they still attract me, I thought it would be interesting to open a shop presenting Japanese objects, but in a different way. I must have been influenced by the ambiance at the time.

According to you, is this renewal in interest for craftwork a stroke of fortune for Japan?

O. T. : I think it can be useful for the country, but it is too soon to say whether it is a stroke of fortune. But if the global capitalism that is currently dominating our world eventually disappears, we might end up evolving into a post-capitalist model in which mingei will indeed play an important part.

Who are your favourite craftsmen?

O. T. : Ninjô Yoshikatsu, a master in lacquer-ware. His products are simple but incredibly strong. Funaki Kenji is a ceramicist from Fujina (see map, pages 6-7). He is both part of the mingei tradition, and outside of it. Feu Narui Tsuneo was a potter from Mashiko (see map pages 6-7) who made implements with connections to the land.