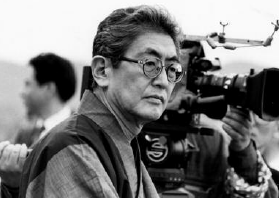 After his death on the 15th January at the age of 80, the director of In The Realm Of Senses left a huge legacy to cinema around the world.

Oshima Nagisa, a unique film director and precursor of the so-called “Japanese New Wave” in the sixties and seventies, bowed out quietly on the 15th of January at the age of 80. After having been paralysed for years following a cardiovascular accident in 1996 that left him wheelchair bound, he died of pneumonia at Fujisawa hospital. His death, just a few weeks after that of his friend Wakamatsu Koji (who produced In The Realm Of Senses), marks the end of an era of creative and rebellious Japanese cinema in which antirealism and unbridled imagination triumphed, in contrast to the “classic” social and realist trend in the cinema of the fifties.
Those who knew him well (and I have had the good fortune to be among them since the sixties and seventies) remember his strong anti-conformist personality, his radical assertions and his irrepressible laughter that few did not experience! Oshima had already been at the heart of the debate in Japanese cinema long before his most famous movie, the “scandalous” In The Realms of Senses (Ai no korida, 1976). At the time of its release that film was more easily seen in Paris than in Tokyo, and for it he was ruthlessly censured for “pornography”. He had already altered the direction of Japanese cinema when he turned his back on the Shochiku studio in 1960, where he had started as an assistant (to Nomura Yoshitaro and Kobayashi Masaji),
and had became a film director in his own right in 1959 with the hyper-realist A Town of Hope and Love (Ai to kibo no machi). The Shochiku period was to be brief. Two films bursting with energy were released in 1960, The Sun’s Burial (Taiyo no hakaba) and his famous Cruel Story of Youth (Seishun zankoku monogatari). Both, alongside Yoshida and Shinoda’s first films, were beacons of Shochiku’s “New Wave”. Soon after, with Night and Fog in Japan (Nihon no yoru to kiri), referencing Alain Resnais’ famous film, Oshima launched a scathing attack on certain left wing Japanese ideas as well as the anti-American stance of the radical young. The Shochiku studio withdrew the film after only four days, so the young Oshima, then only 28 years old, left the studio in a fury and launched his exceptional career, creating several films, all very different in subject and style. In 1965 he started up his own company, Sozo Sha, with help from his wife, the actress Koyama Akiko, who appears in most of his films.
There followed a string of these daring and radical films, with sexual and political overtones, from Pleasures of Flesh (Etsuraku, 1965) to Sing a Song of Sex (Nihon Shunkako, 1967) and Death by Hanging (Koshikei, 1968), based on the true story of a Korean rapist who is condemned to death, and in which he violently attacks anti-Korean racism. Oshima was a multifaceted film director, unlike Imamura Shohei and Yoshida, whose styles are always immediately recognisable. Some of his movies, such as Death by Hanging or Boy (Shonen, 1969) were then released in France, notably in Avignon in 1969 thanks to the distributor Shibata Hayao and his wife Kawakita Kazuko. The Ceremony (Gishiki, 1971), the extraordinary portrait of a noble family falling apart, was shown at “The Directors’ Fortnight” at Cannes in 1971. Oshima also directed a few films for television, but it is due to the French producer Anatole Dauman that Oshima gained international renown with In The Realm of Senses (1976), shot in camera in Tokyo, and presented at the “The Directors’ Fortnight” in 1976. Oshima’s masterwork came out during a climate of sexual scandal, bang in the middle of the moral revolution! Far from the “pornographic” film it was considered to be in the eyes of the Japanese censors, Ai no Korida uncompromisingly explores the outer limits of eroticism and death through the means of a true story that took place in 1936 at the height of Japan’s military growth. After Empire of Passion (Ai no borei), a beautifully costumed crime film that won the Best Director Award at Cannes in 1978, Oshima directed Furyo (Senjo no Merry Xmas/Merry Xmas Mr. Lawrence, 1983), a very successful British production thanks to the erotic relationship portrayed between David Bowie and Sakamato Ryûichi (the latter also wrote the haunting musical score). However, this signalled the end of his great imaginative films of the sixties and seventies. Max Mon Amour (1986), that tells the story of Charlotte Rampling’s love for a Chimpanzee, was a failure with both critics and the public.
He then directed an autobiographical film for TV called Kyoto, My Mother’s Place (1991). Alas, having being considerably weakened physically after his stroke in 1996, Oshima was able to direct only one more film, the elegant and erotic Tabou (Gohatto, 2000). Shown at Cannes, this was the homosexual swan song of a great director who was caught up by destiny and the cruelty of old age. The mark he made on cinema in Japan and worldwide is huge. Since 2000, numerous tributes and retrospectives have been dedicated to him throughout the world.