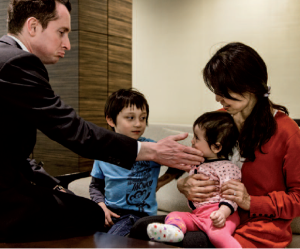 If the Japanese are not having enough children, it’s their own fault. At least, that’s the opinion of one mother.

Watanabe Junko has been married to a Scot, Richard Dawson, for five years and is the mother of two children: Alexandre and Rika. Her husband, from Edinburgh, is the director of an international audit firm in Tokyo. The family lives in a comfortable flat in Minato in the Japanese capital. Alexandre, aged 9, is a little tornado. Between racing around at break neck speed he bends over and kisses his little sister, Rika, just 9 months old and sitting on her mother’s lap. “He’s always like that,” says his mother apologetically. “It’s hard to channel his energy”. Little Rika watches attentively. Watanabe Junko, who comes from Nagano, exudes gentleness and kindness. She likes spending time with her children and admits sheisn’t in a rush to resume her work as a secretary. “I feel so happy while I’m with my babies,” she smiles. At 39, Junko defines herself as an old mum”. “In Japan, I’m already considered quite old to have children, even though today the trend is for an increasing number of Japanese women to want to have studied and started a career before having children. They want to work outside the house more, and become more independent financially. When they realise that they want a child they are too old, or are too involved in their work, and it’s hard for women to reconcile their professional careers with family life in Japan,” she continues. On the question of childcare, Junko has her own idea to help young mothers with too much on their hands. “I think we should create a community that allows us to help each other. For example, I live in Minato. The mayor here has created a support group, and the way it works is ingenious: experienced mothers, who live in the area, take part for 800 yen per hour. Its very affordable when compared to the cost of baby-sitting services. It’s a godsend for mothers who can’t count on their parents’ help as they live too far away”. Watanabe Junko considers herself privileged in her professional life. “I was very lucky, because my company takes great care of mothers. For example, we are allowed a year and a half of maternity leave. We can also choose to work part-time or to do some of the work from home until the children are 12. It’s ideal,” she confirms with a smile. According to Junko, there is only one reason for the drop in Japanese birth rates: Japanese men. “Well, especially the soshoku kei danshi who reject their wives, the couple and marriage,” she says.

The soshoku kei danshi defines a generation of young Japanese, aged between 20 and 35, that doesn’t want to devote life to a professional career. So they avoid responsibilities or any competitive situations and demonstrate very little ambition. Their aim is to take advantage of life, earn little and spend little and take care only of themselves. For them it’s just a case of making the most of time as it passes. Soshoku kei danshi, translated as “herbivores” in Europe, are also uninterested in love and sex. Fukasawa Maki, author and journalist, employed the word for the first time in 2006. “In Japan, the word for sex literally means flesh,” she says in an article. That is why I called these men herbivores, because they’re not interested in flesh”. It’s estimated that 60% of Japanese men between 20 and 34 years of age identify with this lifestyle. According to a poll of 500 young Japanese, taken by Lifenet Seimei Insurance two years ago, three quarters of the people interviewed were concerned about this new trend. “The soshoku kei danshi are everywhere now,” says Watanabe. “They are very feminine, and wait for women pick them up, which they don’t want to do. It might be due to the way they were brought up by their mothers, who pampered them, and to the absence of a father, who was uninterested in young children. On their part, women are gaining in independence: they don’t need men financially anymore. So meeting someone is much harder. In general, I believe that it’s hard to have a relationship with a Japanese man nowadays. Japanese men don’t like strong personalities. Of course, young women don’t pose that problem, but as they grow older and start to assert themselves, things get harder. And past a certain age, Japanese women have a lot of difficulty finding a husband. It’s much easier with foreigners! They like independent women better,” she states with a touch of bitterness.

Despite the definition given by the Japanese Sexology Society, “sexless” does not apply to a specific situation. It means not having any consensual intercourse or sexual contact for over a month. But this definition goes back 17 years. In a poll carried out in 2007, which asked what length of time should lapse before the term “sexless” was applicable, approximately 30% of the people questioned replied six months. And so the severity of the “sexless” problem progresses.