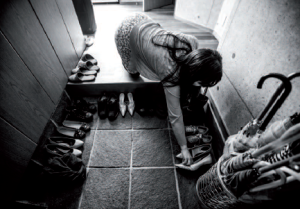 House sharing is currently developing as a significant societal trend, especially since the disasters of March 11th 2011.

Household models and lifestyles in Japan have remained pretty stable through the years. In particular, most young people usually live with their families well into their 20s and 30s, or move into tiny one- or two-room apartments when they find a job or go to university. One thing that the Japanese have avoided for many years though, is house sharing. While in the West it is quite common for a group of friends – or even unrelated people – to share a place (see the American sitcom “Friends” or Cedric Klapisch’s 2002 film “L’auberge espagnole”), many Japanese traditionally feel uncomfortable about sharing a living space – and the related chores and responsibilities – with people they don’t know. At least this was true until a new trend emerged a few years ago that has made house sharing the new hot phenomenon in the local housing market.

So-called share houses (also known as social flats) are now so popular that they have been the subject of a 2011 film and a recently aired TV drama, “Share House no Koibito” (Share House Lovers). Indeed, according to an industry survey, the number of share houses in Japan has increased 26 times in the last eight years, most of them concentrated in Tokyo and other large urban areas. A typical share house is a two- or three-storey house where several, usually unrelated, people live together. They all have a private room and share the other spaces (kitchen, living room and bathroom). The house sizes range from small 4-5 room places with a total area of 60-100 square metres, all the way up to big buildings which can accommodate more than 100 people. Actually, this system is not completely new in Japan; for many years there have been so-called guesthouses which work more or less according to the same rules. The problem with guesthouses is that they have acquired a somewhat bad – although often deserved – reputation for being of poor quality, if not downright dirty. Because of their cheapness, they also tend to attract a high percentage of first-time visitors from abroad who end up scaring off the locals. The new improved versions still welcome foreigners but have been designed to meet the needs of the Japanese, who in general are more demanding and difficult to please. The key to a trouble-free share house is creating the right environment, which includes choosing the right people. That’s why all prospective tenants are usually screened with an interview. Only people who can be trusted with the basic rules of cohabitation (e.g. not to leave their rubbish lying around or their unwashed dishes in the sink) are allowed to join. There are a number of common reasons why people choose to live in a share house. Even though their popularity is partly due to an image of being affordable, share houses popularity is their affordability, they are not actually particularly cheap. Even in Tokyo, it’s not difficult to find a regular apartment for the same price and if you can afford to pay 70,000-80,000 yen a month, you can probably get a nice flat with a larger bedroom.

The real economic advantage is to be found in a near total lack of movingin costs. First of all, a new tenant does not have to pay all the usual fees (deposit, “key money”, estate agent’s fee) that one is expected to pay in advance when renting a flat. Also, share houses are fully furnished, so one does not have to buy all the appliances (fridge, washing machine etc.) that are usually missing in a standard single occupancy property flat. While most guesthouses are rather shabby and basic places, the estate agents who manage share houses make a point of modifying and redecorating them in order to attract the design conscious 20- and 30-somethings who are their typical tenants. Some places are also created in order to attract people with special interests. Moto Azabu Farm Residence for instance, comes with a vegetable garden that the tenants run together. What makes it particularly striking is that this 17-room house can be found in Moto Azabu, one of Tokyo’s central districts and one of the metropolis’ premier residential areas. Another noteworthy place is Bauhaus Minami Senju. This former dormitory residence is a wooden house built in the traditional Japanese style. Inside it is decorated with antique objects and displays the kind of East/West blend that was typical of many houses in the early 20th century. House sharing is proving to be the perfect accommodation for women. Indeed, 70% of share house tenants are females. According to Sanno Kogyo’s Mogi Shinnosuke, many men have a stronger sense of territory and, as a consequence, tend to value their privacy more. Many women, on the other hand, are afraid of living alone and find share houses safer. Particularly after the disasters of 2011, an increasing number of people have come to appreciate the availability of a handy support network outside their family and workplace. Other agencies focus on different peer groups. Gaku Share, for example, specializes in houses for college students (gaku is short for gakusei – student – and daigaku – university). Especially for young people who leave their hometown and move to Tokyo, a share house often represents the easiest way to make new friends, and their parents appreciate the fact that their children are not living alone in the big city.