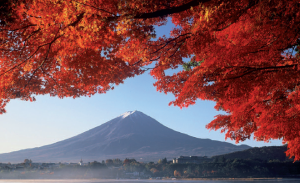 Perhaps the most widely recognised symbol of Japan that there is, the Mount Fuji volcano has been dormant since 1707 and is now a UNESCO registered world heritage site. Lets take a tour.

On June the 22nd last year, most Japanese daily newspapers published a special edition to announce UNESCO’s decision to register Mount Fuji as a World Heritage Site. The application was handed in to the international institution twenty years ago. At first, the Japanese tried to get it registered as a site of natural importance but its tourist development and the accumulation of litter on its slopes prevented its acceptance so the mountain’s cultural importance as a sacred location and a source of artistic inspiration was taken into consideration instead. The volcano plays a major part in the country’s history, which is evident in its presence in many literary, poetic and pictorial works of art.

Many will think of Katsushika Hokusai’s famous series of prints illustrating thirty-six views of Mount Fuji. The master’s work contributed to making the volcano one of Japan’s principal landmarks, although for centuries its image was confined to the background behind Edo’s castle in works of art. At the beginning of the 17th century, Mount Fuji was still a far away mountain for many living in the capital, a passing landmark for travellers on the Tokaido road on their way to Kyoto, where the emperor lived. Its presence was still underplayed in works of art at that time. It wasn’t until the second half of the century that it was given more importance, when the castle started to decline and lose some of its splendour. Its 60-metre donjon built in 1607 was destroyed by fire fifty years later and was never rebuilt. Mount Fuji then took centre stage visually. This transition becomes obvious when looking at the Hokusai sketches sold in the Mitsui shops down Suruga Street in Edo (Koto Suruga-cho Mitsui Miseryakuzu), dating back to 1830. Your eyes are drawn to the volcano and its snowy peak that are at the centre of the composition, while Edo castle is lost amongst the pine trees below. Thirty years later another master engraver, Utagawa Hiroshige, published his famous Hundred Views of Edo (Meisho Edo Hyakkei) in which the volcano appears ever more imposing as it emerges from out of the mist and the castle has completely disappeared from the picture.

As the end of the Shogunate approached, a new chapter was starting. Mount Fuji, which last erupted in 1707, demonstrates great power in the imagination of human beings, especially as for centuries it was believed to have been the home of divinities. “Fuji, like poetry, reaches for the sky and we never know if it is part of this world or the other, perhaps it is a mysterious kami (divinity)?” Fosco Maraini wonders in his work Meeting with Japan (1960). The mountain’s dormant potential for fiery violence is without doubt the reason why people venerate it; they build sanctuaries to calm its anger and wish to commune with it when ascending it’s slopes. A Buddhist monk was the first man to climb to the summit in 863.

The volcanic activity calmed down during the 12th century and Mount Fuji became the centre for shugendo, a spiritual practice that focused on Man and his relation to nature. A monk named Matsudai built the Daini-chi temple at the peak and the first pilgrimages were organised. The number of pilgrims grew progressively and small replicas of the sacred mountain started appearing as keepsakes for those who could not climb the steep faces themselves. Mount Fuji’s cult also grew when Hasegawa Kakuhyo placed it at the heart of his doctrine. The Shinto sect Fujiko is increasing in popularity and encourages pilgrimages to the summit, as well as to other sites near the volcano. At the end of the 19th century the prohibition against women climbing Mount Fuji was lifted. This coincided with the development of roads and rail lines making it more accessible.
Today it still attracts hundreds of thousands of people.

Between the 1st of July and the 27th of August, 200,000 to 300,000 people walk up the volcano’s slopes, of which 30% are foreigners. This number will probably increase now it has been listed as a World Heritage Site. The local authority certainly aims to attract even more tourists. There are four routes to the summit: Fujinomiya, Gotemba, Subashiri and Yoshida, the last being the most popular because it’s also the easiest and the best equipped for the needs of hikers. It starts at the fifth station at 2,305 metres, that you reach by bus (an hour’s ride from Kawagushiko station) or by car (330 parking places).
To hike to the summit at 3,776 metres will take approximately six hours for a distance of 7.5 km. Twenty rest stops are spread along the way and some have rooms for the night to allow visitors to enjoy the sunrise. We advise you to make a reservation in advance if you would like a room, or you might have to walk back down. Nights are very cold and if you aren’t properly equipped, it is strongly recommended not to sleep outside. The Navi Fujiyama website (www.fujiyamanavi.jp) has an English version and lists the phone numbers for the various accommodation available on the side of the mountain, as well as a lot of practical information to help you succeed in climbing the volcano. Starting in 2014 it will cost hikers 1,000 yen to access the site and the money will go towards its maintenance. Unfortunately, despite a lot of improvement, there is still a lot of pollution due to litter.

Although climbing to the top of Mount Fuji is the main aim for most people, they also wish to see the beautiful view (when not obscured by cloud) or enjoy the magnificent sunrise. Mount Fuji’s attraction also lies in its great beauty. The Japanese enjoy looking at it, just as they enjoy gazing at cherry trees in bloom and the red leaves in autumn. Just as the expression Hanami is used to describe the moment of ecstasy while gazing at the cherry blossom, there is one adapted for Mount Fuji: Fujimi.
With its perfect conical shape and its unchanging majesty, it is easy to understand how the peak could have inspired so many artists. One of the best ways to take advantage of its sleeping beauty is to travel by train. Don’t catch the Tokaido Shinkansen line’s fast train, from which you will only see the mountain for a few seconds. For those with JR Rail Passes, the Minobu and Gotemba lines are the best to enjoy the view and the most popular line is the Fujikyuko that runs from Otsuki station and reaches to Kawaguchiko station in 55 minutes. The prices vary according to the type of train and as is often the case on these popular lines, there are special carriages in which the interior decoration is just as important as the outside.
In the case of the Fujikyuko line, some trains such as the Fujisan Tokkyu and the Fuji Tozan are completely overrun by Japanese travellers. But whatever the carriage, the landscape will be the same. Don’t hesitate to stop to take advantage of a beautiful view of Mount Fuji, such as near to Fujisan station.

Another way of admiring Fuji is by boat. Yamanakako Lake, reached by bus from Fujisan station (Fujikyuko line), offers a pleasant and surprising experience, especially if you have children with you. Catch the Yamanakako no Kaba (Yamanakako’s hippopotamus) that leaves from Yamanakako Asahigaoka, an amphibian vehicle (2,000 yen, 1,000 yen for children) that allows you to discover Fuji in an enjoyable way. If you wish to combine flower gazing (hanami) with Fuji contemplation (Fujimi), go to Yamanakako Hananomiyako park, accessible by bus from Fujisan station. Entrance is free all year around (8.30 am to 5.30 pm) and it offers a beautiful view of Mount Fuji with fields of colourful flowers in the foreground. From April to May, tulips are blooming while Mount Fuji is still covered in snow in the background and in June and July sunflowers follow poppies. At the Kawaguchiko terminus of the Fujikyuko line, the eponymous lake is also an ideal place to contemplate Fuji. There are several cruises offered all year round. However, just 20 minutes away from the station there is an even better place to contemplate the sleeping volcano: the thermal baths, Fuji chobo no yu Yurari (towards Motosuko, three minutes away from the Fujimidori no kyukamura stop). Open every day from 10 am to 10 pm (1,200 yen, 600 yen for children), the outside bath (rotenburo) offers an incomparable view of Mount Fuji. Bathing with such an incredible view of Mount Fuji is like being in a dream.