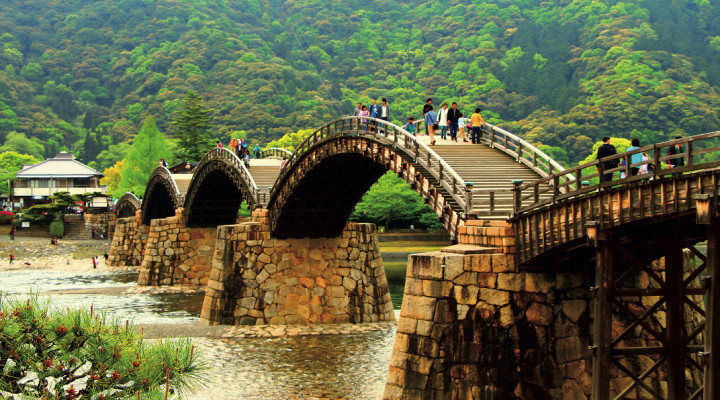 Every year, 40,000 people attend a celebration unlike any other, in an amazing setting.

Under the Kintai bridge, flat-bottomed wooden boats carry passengers through the water, just as they used to centuries ago before the general population was allowed to cross over its span. One long vessel glides slowly through the river, calmly maneuvered by the boatman and with an awning like a Venetian Gondola to protect its passengers from the sun. The stately pace and the timeless setting make it easy to forget that these calm waters can turn into torrents of raging water at any time. This is no ordinary bridge. This is the Kintaikyo, spanning the the Nishiki River in Iwakuni, located in Yamaguchi prefecture at the far west of Honshu. It’s one of the three great bridges of Japan and the locals are so proud of their bridge that they celebrate it annually on April the 29th, with the Kintai-bashi matsuri that attracts 40,000 people every year.

So why does this bridge get so much attention? First of all, because it’s beautiful. Furthermore, its five elegant arches were built without a single nail, and are supported entirely by three stone pillars. This mighty edifice is clearly a technical marvel, but to uncover the history behind it, you need to go back four centuries, to 1600, when Kikkawa Hiroie, Iwakuni’s first feudal lord, lost the battle of Sekigahara. Banished from his castle in Izumo, Kikkawa settled in Iwakuni with the intention of building a new castle. He chose Mount Shiroyama, by the Nishiki River, which served as a great natural defensive barrier. He ordered high ranking Samurai to build their residences by the river where the castle was situated, while lower ranking samurai and traders had to settle on the other side, explaining how Iwakuni became a city split in two by the river. These days little has changed, and crossing the bridge towards the castle is like going back in time. Here lie the foundations of the former residence of the Kikkawa family, in Kikko park, where museums, fountains, ancient shrines and samurai houses can also be found. There is also the Kikkawa family sanctuary (1883), and the superb Mimiji Dani Park, which was created from several temple gardens, earning it the nickname of “the Kamakura of the west”. Kikko Park is also home to the White Snakes’ Museum. Found only in Iwakuni, these adorable creatures are considered a national treasure, and are believed to be the messengers of Benzaiten, Goddess of Happiness. On the other side of the bridge lies the rest of the city.

Of course, the two sides of the city needed to be connected in some way. The Nishiki River is rather temperamental, and famous for the floods that destroyed the first few attempts at building a bridge. This state of affairs lasted until the time of Lord Kikkawa Hiroyoshi, who declared that he wanted to “build an indestructible bridge… whether I build one with solid pillars, or one with none at all”. He opted for the first solution, and the first Kintai Bridge was completed in 1673. Unfortunately, a storm swept the wooden structure away several months later and in 1674, a new, more solid bridge was opened, lasting 276 years until typhoon Kijiya destroyed it on the 14th of September 1950. The locals gathered to save what was left of the bridge that they were so proud of, working all through the night to try and divert the water, while chanting: “We must protect the bridge”. Alas, at 9.40am they watched powerless as the third pillar collapsed, while the third and fourth arches were also swept away, shattering their dream of the bridge one day being recognized as a national treasure. In response to the great sorrow of the local population, plans were already being made to rebuild the bridge a week later. Several members of parliament in Tokyo suggested replacing it with a concrete bridge, but this angered the inhabitants who were hoping for the bridge to be rebuilt in its original form. After battling for two years, they prevailed, and in January 1953 the Kintai Bridge, the third to be so named, was opened. Finally, forty years later, it was registered as a national treasure. The people in Tokyo were right about one thing though. A wooden construction will always be at the mercy of the elements. However, rather than design a more permanent structure (an impossibility, as even the experts concluded that modern techniques could not guarantee to make it any stronger), the city of Iwakuni found an original solution, which consisted of passing on the knowledge of architectural techniques that could be reused again and again. So traditional techniques are handed down from one generation of civil engineers to another, who can gradually replace the sections worn away by time and tide with new pieces made out of Japanese cedar wood. To do this, they used techniques that have barely changed since the Edo era (1603-1868). The first part of the renovation took place in 2002 and the work was actually finished on the 20th of March 2004, but the following year the bridge was damaged by another strong typhoon. The current Kintai Bridge is thus the fourth to bear this name.

Returning to the matsuri; the sound of huge drums rises from the banks of the river, recalling thunder before a storm. It announces the high point of the day: a spectacular procession that crosses over the bridge, reconstructing the return of the local feudal lord (daimyo) after he was forced stay in Edo by the Shogun, who wanted to test his vassal’s loyalty. The daimyo is escorted by a large and colourful crowd dressed in period costume. Men wave huge banners hanging off the end of poles with large pompoms on top. Others surge behind them, waving flags, beating drums, crashing cymbals, singing, and carrying large tansu (wooden chests). Public workers, priests, courtiers and soldiers march and dance across the timeless bridge, some armed with samurai swords, others with bows and long, decorated arrows and many dressed in gold coloured coats. The scene resembles one of Hiroshige’s etchings from his series of 53 drawings on the Tokaido road. The procession unfolds at the pace of a Noh play, like a eulogy to slowness. After an hour, the lord and his wife appear, surrounded by ladies-in-waiting dressed in beautiful kimonos. Their arrival announces the end of the procession. Now people can use the bridge again. For 195 years, only the daimyo and his vassals were allowed to cross it, others had to make do with boats to reach the other side. It was only in 1868 that the bridge was opened to everyone. Nowadays, anybody can cross it after paying 300 yen, but that still doesn’t prevent one feeling privileged to do so. When the procession is over, hundreds of tourists travel back and forth over the bridge. On asking a local guide whether the bridge can support this much weight, we’re told not to worry. “It was built so that it becomes more solid with added weight,” he assures us. Just like the daimyo and his entourage, it’s worth taking your time when crossing it, to linger and savour every moment, taking in the curves of the bridge, the steps, the surrounding hills and woods and the Nishiki River flowing over its stoney bed. This is, after all, the land of stone, a literal translation of the name “Iwakuni”. Suddenly, the sound of medieval handguns being fired startles the visitors. It comes from the other side of the river where a company arquebusiers, including both men and women from Iwakuni, can be seen in samurai battle dress. It’s quite a complex process loading these old firarms, but when the commander in his splendid costume gives the order to fire, there’s a loud volley and the troop disappears in a cloud of smoke. At that moment, you’ll look around and see absolutely nothing to lead you to believe you are in the 21st century.

The arquebusiers train once a month along the banks of the Nishiki. Like the bridge engineers, the company hopes to preserve this cultural heritage from the period when Ishida Mitsunari commanded the western army during the battle of Sekigahara. After the performance, the soldiers are happy to pose for photos, and if you’re lucky, you’ll even get to hold one of their firearms. “This one was in use more than 300 years ago in Japan,” says one of the gunnery troop, his hands black with gunpowder. You can’t end the day and leave Iwakuni without having tasted its famous layered sushi. Volunteer guides, wearing turquoise jackets, will be happy to suggest one of the many restaurants that serve the delicacy, such as the Hangetsu Ryokan, founded in 1869 and located just below the road to the bridge. Opposite is a beautiful little traditional garden with mossy stone lanterns, maple trees and a pond full of carp. A lady dressed in a pink kimono is admiring the fish. “Nishiki goi,” she says, emphasizing the word “nishiki” (rainbow coloured brocade) as if to say “You see, they named the fish after our river, the one with the bridge”.

To get there
Traveling from Hiroshima you have two options. You can either get the shinkansen to shin-Iwakuni on the Hakata line (15 minutes), or take the jT sanyo line to Iwakuni (26 minutes). In both cases you will need to travel by bus or taxi for the last 5-6 km to Kintai Bridge.