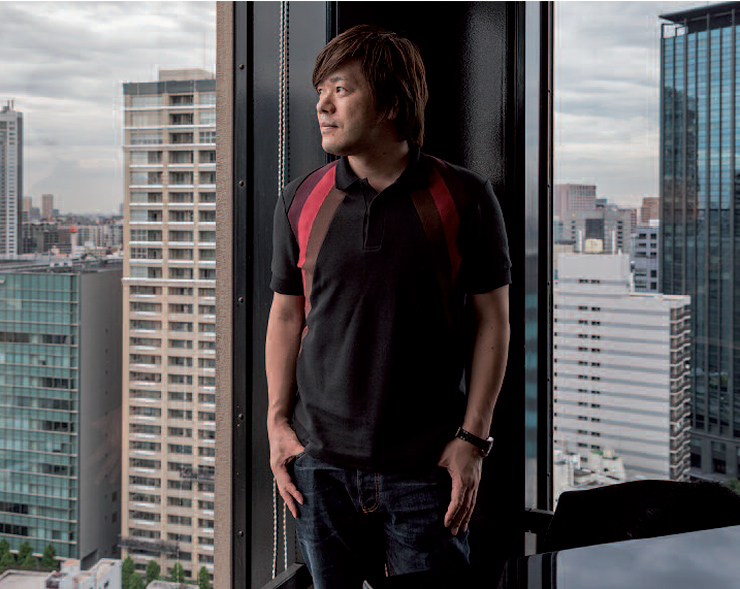 Hirano Keiichiro is not just an immensely talented novelist; he is also very interested in politics and writes
many essays on the subject.

The novelist is an acute observer of society. He never hesitates to express his views when he thinks it’s necessary.

author and Akutagawa Prize winner Hirano Keiichiro is mainly famous, especially outside Japan, for being a great lover of words and well-written sentences who constantly strives to refine his style. However, while many of his works are moral tales where the protagonists question themselves and their place in the world, Hirano is also a prolific essayist who is not afraid of voicing his opinion on current politically sensitive issues.

Your new book, Jiyuu no korekara (The Future of Freedom), has just come out. What kind of book is it and what motivated you to write it?
HIRANO Keiichiro :The theme of “freedom” has been a constant in most of my novels. We can approach this subject from different angles. Politically speaking, for example, people are being asked to trade their freedom for more security. This has created, in the last few years, a sort of “surveillance society” where we have gradually lost our privacy. In this case, technology has clearly been used to control us and restrict our freedom. On the other hand, though, technological advances can give us a degree of freedom and safety in everyday life that we have never had before. A typical case is autonomous driving. Self-driving cars promise us a future with fewer traffic jams and accidents; a future where we can safely travel or commute to work while engaging in other activities.

Another field where technology has been a mixed blessing is information. On the positive side, we now have easy access to all kinds of information. When you think about literature, for example, the 20th century was dominated by Western literature, but now thanks to the Internet more and more writers from Africa, Latin America and Asia have become known internationally. The downside of this is information overload. Also, the Internet works in such a way that it actually affects our choices by giving priority to certain information.

I guess we have become too used to getting everything quickly and easily with just a few clicks.
H. K. :That’s certainly true. I guess we have become lazy in this respect. On the other hand, we can’t forget that the Internet can also be a useful source of independent information. In The novelist is an acute observer of society. He never hesitates to express his views when he thinks it’s necessary. ENcOuNTER The politically engaged Keiichiro Japan, for example, the press has been under constant attack from the government for several years now. Just consider, Japan used to be in the top ten of the World Press Freedom Index (WPFI) created by Reporters Without Borders. However, since Abe’s second administration took office in 2012, it has plunged to 72nd and last among the Group of Seven countries as mainstream media outlets have resorted to self-censorship, thus surrendering their independence. In such a climate, the Internet comes in handy as we are able to get alternative information from the foreign press, freelance reporters and citizen journalism.

It’s also true that Japan is not the only country that is experiencing these authoritarian attacks on the freedom of the press. It seems that people are gradually getting accustomed to the idea of losing their freedom and privacy for the sake of security.
H.K. :Certainly, the idea of prevention is becoming more and more popular. This is particularly understandable when people’s lives are at risk. Socalled preventive medicine, for example, relies on anticipatory actions (checkups, etc.) in order to keep people safe from disease. The same principle is now being applied to fighting crime, as demonstrated in the response to the recent wave of terrorist attacks. However, I’m strongly opposed to this approach for a number of reasons. First of all, I really doubt preventive measures like the Anti-Conspiracy Bill can actually stop terrorists – especially those people without any affiliation to terrorist groups who act on their own. The only thing such laws achieve is to increase the police’s discretionary powers. Also, when you take a close look at the Anti-Conspiracy Bill you realize that very few of the 277 “serious crimes” listed have any actual connection with terrorism and organized crime. Among them, for example, there are sit-ins to protest against the construction of apartment buildings, and copying music. In other words, the real risk is that this law can be misused and abused for political reasons, like silencing the opposition. Right now, for example, there is a strong civil movement against the American military bases in Okinawa. From the government’s point of view, this movement is obviously interfering with Japanese- American relations. As a consequence, many people have already been saying that sooner or later demonstrators will be targeted through the Anti-Conspiracy Bill.

While you are probably better known as a novelist, you have actually written many essays as well, including pieces on the Japanese Constitution and hate speech. Speaking of the latter, what do you think about the scandal surrounding Abe’s favouritism of Moritomo Gakuen?
H.K. :When I first heard the news, I was shocked that such a school actually existed in Japan. Moritomo is directly linked to the nationalist group Nippon Kaigi [see Zoom Japan #48, February 2017] and has been indoctrinating its kindergarten students with a kind of anti-Chinese and Korean ideology that smacks of hate speech. This kind of education is commonly favoured by dictatorial regimes in Latin America or Africa. I would have never believed that such a thing could happen in Japan in my lifetime.

If it were another in country a scandal of such proportions would cause the cabinet to fall.
H. K. :Exactly. The problem in this country is that most people are indifferent and apathetic when it comes to political and social issues. That’s why it’s very important that journalists do their job by keeping people informed and taking the authorities to task every time there is a problem. I’m pretty sure a lot of people don’t even understand what the Anti-Conspiracy Bill is all about. To be sure, these are not simple issues, so it takes some effort to really understand what politicians are trying to do.

Do you think the younger generation are going to change things in Japan?
H. K. :They should, because their lives are going to be affected more than anybody else’s. It’s in their interest to make things better. Sadly, even people in their 20s and 30s seem to be quite uninterested. In fact, only a minority of politically committed youngsters are demonstrating in front of the Diet. And away from Tokyo the situation is even worse. The only solution is to change the system in such a way that they feel a renewed connection to social issues.