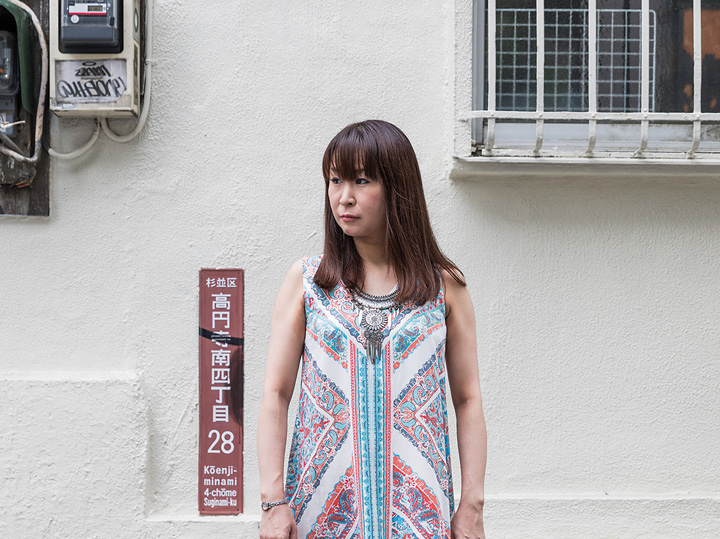 AMAMIYA Karin’s mission is to fight in defence of the precariat.

AMAMIYA Karin vigorously denounces the rise of poverty and the precariat in Japan.

Tokyo’s western suburb of Koenji is famous for attracting many cultural and social activists. It’s not by chance that the anti-nuclear demonstrations following the earthquake and tsunami in March 2011 started here. Born in 1975 and belonging to Japan’s so-called “lost generation”, Amamiya Karin used to be the lead vocalist in an ultranationalist punk rock band, The Revolutionary Truth. However, she has emerged in the past 15 years as a prolific writer and very vocal activist and advocate for the working poor. Through the years, Amamiya has tackled such issues as bullying, social withdrawal, and suicide, but on this hot July afternoon we focused on Japan’s new wave of poverty.

What many people don’t know is that between the ages of 19 and 24, Amamiya herself worked as a freeter (someone who can’t find, or deliberately decides not to pursue, full-time employment) and intimately knows the problems she often talks and writes about. “I was born in Hokkaido in northern Japan, but came to Tokyo in 1993”, she says. “I wanted to go to art college, but I failed the entrance exam and began to attend a yobiko (a sort of Japanese private crammer). However, I finally gave up on my dream in 1994 and decided to look for a job instead. Unfortunately, those were the years of the socalled “employment ice age”, and finding a decent job was incredibly difficult. Eventually, I settled for low-paying part-time jobs like shop assistant or waitress. Later, I even worked in a hostess bar as it paid better”.

After a couple of years, the situation for Amamiya and her friends looked so bad that they began to fear they would never find a way out. “Imagine working at a bottom-level, mind-numbingly tedious job anybody can do”, she says. “You’re paid almost nothing, and on top of that you can be fired anytime. That’s actually an illegal employment practice, but we didn’t know that at the time. We used to joke that once our parents were gone we’d probably end up in the street”, she remembers. “You only needed to miss a few days of work with a bad cold and you didn’t have enough money to pay the rent or the gas bill. During this period, I really thought I’d become homeless”.

At the time, most people thought of freeters as free spirits who refused to look for a full-time job, but Amamiya felt anything but free. “We just couldn’t escape our situation. And yet we were seen as spineless people with no sense of social duty who didn’t care for our future. It was like a mantra, and eventually I began to believe it. I began to think there was something wrong with us”.

Amamiya’s opinion began to change at the turn of the century when she became involved in work-related activism. “I became interested in this subject in 2006”, she says. “In 2000, I had quit my “career” as a freeter and become a writer. I stumbled upon the word “precariato” (Italian for temporary or casual work) on the Internet and I was reminded of my previous condition. So I decided to join that year’s May Day rally organised by a freeter union. It was there that I first realized to what extent neoliberalism and globalisation had changed the labour market for the worse. Even before that, I had a feeling that people around me were suffering and even committing suicide, not only because of personal pro-blems but as a consequence of the social distortions caused by structural unemployment. But on that May Day, surrounded by people who shared my problems, I saw how many of us were being left behind. Those were the people who had been told by the privileged classes that they had to blame themselves – not the State or Big Business – for their living conditions. That was when I decided to take up their cause”.

The word precariato and its derivatives (the precariat in English) are used in many Western countries, but with slightly different meanings and connotations. Amamiya is the person who has contributed most to popularizing the term in Japan. “The way I see it”, she says, “precariato includes all those people whose working conditions are unstable and insecure: the freeters, NEETs and working poor, for example, as well as the unemployed and those who officially have a stable job, but who for different reasons are subjected to constant work-related pressure and feel they may lose their job at any time”.

Speaking of precariato, about two years into her writing career Amamiya read by chance an old novel called The Crab Cannery Boat. Written in 1929 by Kobayashi Takiji, it’s the story of a crab-canning ship’s crew who rebel against their harsh working conditions. Considered one of the best examples of Marxist proletarian literature, it was recently rediscovered and became a surprise hit in Japan. “I was amazed at how little working conditions had changed in 80 years”, she recalls. “Some people may think this book is a relic of a very different historical period, but to me it doesn’t feel remote at all. For example, today’s laws regarding the hiring, management and firing of so-called contract workers let companies exploit their employees any way they want, even more than those who work for dispatch agencies. That’s exactly the same thing as described in the book. Incredible as it may be, many people in the 21st century are working under the same harsh conditions as their grandfathers”. In the last few years, many unions have been created to support different categories of precariato. From students to freeters, even club hostesses, each group has its own union.

This said, Amamiya has to admit that the working conditions of precariato have not improved as much as she had hoped. “I’ve been following these people’s lives for the past ten years, but as a whole they still lead very unstable lives. The people I know are now ten years older, which means they find it even harder to find a job. According to the government, the Japanese economy has improved in the last few years, but this supposed improvement hasn’t concerned the lives of either freeters or the working poor”.

Among the positive data that the Abe administration has recently fed the media is a very low unemployment rate. This, according to the authorities, is supposed to be proof that Japanese workers are better off than the critics say. However, Amamiya is among those people who think we should not accept official figures at face value. “The way they calculate the unemployment rate in Japan doesn’t include people who have given up looking for a job, or other categories usually covered in other countries. On the other hand, a lot of so-called employed people belong to all the disadvantaged groups we have talked about earlier. Of course they work, but that doesn’t mean they have an economically secure life. For me, putting freeters and working poor on the same level as regular workers is like cheating”. While the stereotype of the working poor is lower-middle-class people with limited education, today more and more freeters are in fact highly educated. “You must remember that nowadays only about 60% of young people seeking employment are actually able to secure a regular job”, Amamiya says. “In such a situation, having graduated from college doesn’t help. On the contrary, sometimes it becomes an added problem because these people are overqualified. On top of this, even pursuing an academic career as a teacher or researcher has become harder and harder”.

Amamiya is particularly critical of the way Prime Minister Abe has treated under-privileged workers. “In actual fact, it was former Premier Koizumi who began to talk about “personal responsibility”, as if working in harsh conditions was the result of one’s personal faults instead of a concerted policy to protect vested economic interests. But it’s also true that Abe has done nothing to rectify this problem; in reality, he made it worse through his 2013 legislation”.

Though the working poor are not exactly wealthy, there are so many of them that they have attracted several companies who cater to them and sometimes exploit their condition — what writer Kadokura Takashi calls “poverty business”. “On the one hand, you have estate agents who specialise in apartments that don’t require “key money” or deposits”, Amamiya explains. “On the other, there are those who actively seek out homeless people and others in receipt of welfare payments. They provide them with modest and cramped living quarters and three meals a day in exchange for handing over all the money they get from the State”.

“Another form of poverty business is student loans. In Japan, we call them scholarships, but that money is not free. It must be paid back and many people get caught in an endless cycle of debt”. Political propaganda aside, Abenomics does not appear to be working, and the overall economic situation seems to be worsening. A recent survey reveals that living conditions are pretty hard for 62.4% of the population. As Amamiya points out, the average annual income is declining with more people than ever earning less than 2 million yen a year. “Many people are becoming depressed after years of struggling at the bottom of the economic ladder. We now live in the age of a twospeed society, and the privileged rich don’t really care about what happens to the rest of us. However, this situation poses a great risk for the whole nation. Now, fewer people are actually able to get married and have children. It’s a fact that the Japanese population is shrinking. If things don’t change quickly, we’re heading for extinction. I see many people of my age who are very discouraged”.

“On the other hand, more people in their late teens and 20s have joined unions and other groups belonging to the precariato movement. In this sense, I’m hopeful about the future. The struggle for better living conditions is not dead yet. I really hope the younger generation can bring about change because for too long the Japanese have lived in a state of stupor”. While Japan’s future looks far from rosy, Amamiya believes there are many things that the government can and should do to improve things. “First of all, they should raise the minimum wage. Then the State should allocate more money to support the poor, for education and raising children”, she says. “Politicians are always complaining there aren’t enough resources to devote to the young and the needy, but in my opinion a fairer fiscal policy would be a very good way to redistribute wealth”.

No51 [THE FUTURE] The one who observes change