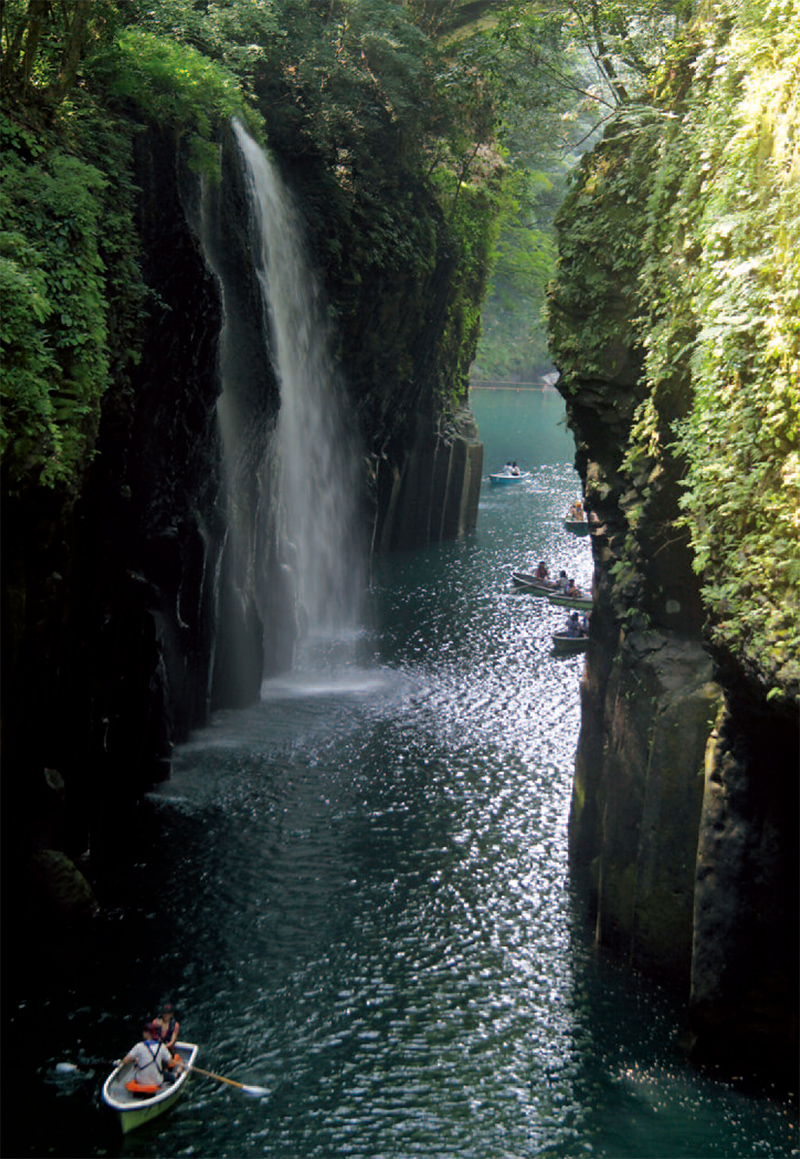 Situated on the island of kyushu, at the southern end of the archipelago, this region is brimming with treasures crying out to be discovered.

In the region of Miyazaki, situated in the south-east of the island of Kyushu, terraced rice paddies follow the coastline as far as the eye can see. The air is suffused with the delicate perfume from the profusion of fruits and vegetables cultivated here. Just as in the rest of the region, hot springs abound and the rich local cuisine reveals an abundant array of tastes. In the gentle countryside in this part of Japan, it seems you can live well the whole year round following the natural rhythm of the seasons.

In the searing heat of August, Yoshino Junko is cooking small green peppers she has grown in the greenhouses on her farm, which covers an area of more than seven hectares (17 acres). This vegetable is the main agricultural crop produced in the small city of Saito, situated in the heart of Miyazaki. The climate is particularly favourable for growing peppers, which are eaten raw in salads or, when grilled, used as a garnish for meat.

It’s almost 9 a.m., and like other local farmers who grow peppers, she’ll need to go indoors. “It’s too hot at this time of the year, and I’ll start again when the temperature has dropped and it’s the same inside as it is outside,” she declares, still smiling. We must point out that Junko’s day began at dawn: she was in the fields by 5 a.m., and after a hearty breakfast, a good day’s work still awaits her in the house. For the past ten years or so, Junko and her family have been running a B&B for travellers, both tourists and Japanese students as well as foreigners, “mainly from Taiwan”. Just like at dinner time last night, the breakfast table groans with local dishes, each one as delicious as the next: grilled fish, miso soup, rice grown on the farm, peppers, fruit from the garden and homemade fruit juice. In the kitchen, sitting round the table with her grandparents who live in their own part of the enormous traditional farmhouse, the travellers soon feel almost part of the family. “Grandfather really likes it when we have guests, and even though he hasn’t travelled a lot he knows a great deal about foreign politics,” she says proudly. “However, you need to speak very loudly, he’s hard of hearing,” she laughs.

Almost all of the local farms, twenty-three of them, also offer this kind of accommodation. “If visitors want and are interested, we let them come with us into the fields so that they can see the work of the farm with their own eyes,” adds Junko. “We also arrange workshops so that people can prepare their own miso or umeboshi, pickled plums eaten as a condiment with rice.” It’s a key ingredient in Japanese meals (see Zoom Japan no.39, March 2016).

At this hour of the morning, Junko’s husband is still in the fields where he’ll remain for the rest of the day. As he doesn’t work on his own farm, he “does odd jobs to help out other local farmers”. In Saito, rice, citrus fruit such as yuzu, and even mango are cultivated. Using produce from the garden, Junko prepares all kinds of food products such as umeboshi, alcohol made from umeshu plums, and shiso juice, some of which are sold in nearby restaurants.

In addition to her parents-in-law, she also looks after several animals. Junko’s farm is a veritable menagerie. Her dog, Warabi, barks happily every time someone moves in the house and plays with the rabbits, while the goat stays in the garden. In the evening, she takes out her vivarium filled with kabutomushi, a kind of large beetle that young Japanese children like to collect during the summer so that they can observe them. “My favourite insect is still the firefly,” confides Junko. “There are lots in the region, and you can see them at certain times of the year. It’s always magical.” In the evening, after she’s come in from the fields and has had dinner, she also likes to visit the nearby hot water spring. Bathing is “the best remedy for chilling out and relaxing after a hard day’s work,” she enthuses. It’s an opportunity to catch up with her friends who regularly meet there.

In the main room of the farmhouse, entirely covered with tatami and where portraits of her forebears have pride of place, dozens of family photos are displayed on the walls. Some portray recent events, others depict the past existence of this beautiful farm filled with history and life, which was built almost 96 years ago. “There, that’s Grandmother when she was young. She was beautiful, wasn’t she?”. Yellowing images trace aspects of life punctuated by the the seasons, work on the land, and village festivals.

Respect for nature is crucial for Kuroki Shinsaku, too. Aged only 30, he manages the shochu distillery, Kuroki Honten, around twenty kilometres west of Saito, in the small town of Takanabe. Shochu is an alcoholic beverage, especially popular in the south of the country. It’s made from sweet potatoes, wheat or sometimes even rice: its popularity has soared in the past few years, replacing sake in Japanese hearts. Shochu can be drunk with ice, sparkling water, hot water or, as enjoyed by the inhabitants of Kyushu, with kabosu, a small green citrus fruit grown locally. “The advantage of this beverage is that it goes well with all kinds of food,” explains Kuroki Shinsaku. “Its strength varies according to what it’s made from (wheat, sweet potatoes, rice), and is best as an accompaniment to meat, particularly the region’s famous beef, when it’s full-bodied, or raw fish, when it’s not so strong.” The house speciality is Kogane Sengan, made from sweet potatoes grown in the 43 hectares (106 acres) surrounding the distillery.

The method of producing shochu is quite similar to sake brewing, “only the final stages are different as the raw material is distilled, like whisky”. Kuroki Shinsaku’s brewery has forty employees, including eight actually making the shochu, and is an institution in the region. It dates back to 1886, “when shochu was made in a town a bit to the north of here, but the know-how is the same,” explains the young man.

The vast Kuroki Honten setup is well-established, and its philosophy is to respect the environment throughout the production process. “For about twenty years now, we have produced our own raw materials: rice, wheat and our own variety of sweet potato. The idea is to be able to offer a healthy shochu, which is naturally and organically produced.”

Kuroki Shinsaku pushes this principle even further by producing vegetables to give to local restaurants that share his values. “We also raise ducks, which feed on the grass in our fields. All organic.” Bottles from Kuroki Honten are exported by Japan to the United States, Canada, Hong Kong, Singapore and South Korea.

The rich local culture of the Miyazaki region is also enhanced by its deep roots in Japanese history. In fact, it’s home to a unique historic site, the Saitobaru tumuli (Saitobaru Kofun), which has been recognised as a National Heritage site since last May. To the west of Saito and covering an area of four kilometres by three, three hundred burial mounds dating from the 3rd and 4th centuries were discovered and have been studied since the beginning of the Taisho era (1912-26). “There are several sites on this scale in Japan, but it’s very rare to find one that’s so extensive in a city as small as Saito. In that respect, it’s remarkable,” explains Higashi Noriaki, chief curator of the Saitobaru Archeological Museum. A short distance away from the museum is the Mesahozuka Tomb, one of the oldest and most imposing on the site, built at the very beginning of the 5th century: 1,000 people toiled every day for two and a half years to erect it. Today, many of the tombs on the site are still being studied and continue to bear witness to the life of the local population during the Kofun era (from the middle of the 3rd century to the 7th century), thanks to the discovery of objects, jewellery, bones, etc. Most of the tombs can be visited apart from the two largest, which are reserved for important events.

Further to the north, the countryside of Miyazaki reveals its wildest aspects, and the undisputed pride of the locality: the green lung of Takachiho. The mountain is awe inspiring and offers stunning river landscapes. The area is wellknown for its Takachiho Gorge, formed by a tributary of the Gokase River, which promises travellers a refreshing break in the heat of summer with the offer of boat trips for those who don’t mind crowds; and for the nearby Takachiho Shrine where, as darkness falls, you can observe wonderful displays of kagura, its theatrical dance performances closely connected to the Shinto religion (see Zoom Japan no. 57, December 2017). Early risers can view the panorama of the sun rising through a sea of clouds. Finally, on the road that leads to the shrine of Amano Iwato, terraced paddy fields (tanada) stretch for miles -the Tochimata and Odonokuchi tanada are considered to be among the most beautiful in Japan. At the height of summer, when the sunlight shines on the bright green terraces, the spectacle is quite sublime. Arriving at Amano Iwato highlights the mystical character of these surroundings, as Takachiho is the location of one of Japan’s most famous legends. Amaterasu, the sun goddess, took refuge from the incessant pranks of her brother by hiding in a cave close to the Temple, and in so doing, plunged the world into darkness. So the gods and goddesses gathered together in the shrine of Amano Yasukawara to think of a way of enticing Amaterasu out of her hiding place. This tiny shrine below Amano Iwato is situated in a cave carved into the rock underneath the river. Thousands of small stone figurines guard this sacred place.