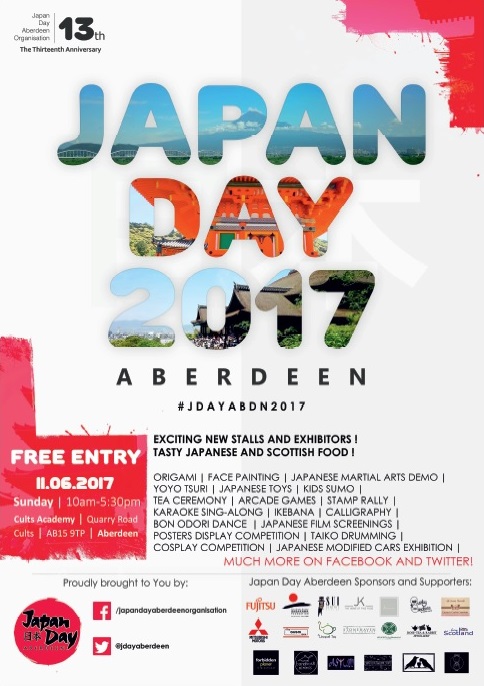 For further info and updates on Japan Day, see

ORGANISERS GEARING UP FOR JAPAN DAY 2017

Organisers of an annual celebration of the culture and heritage of Japan and its historic ties with the North East of Scotland are expecting this year’s event to be the biggest yet.

The voluntary Japan Day Aberdeen Organisation (JDAO) will stage its 13th Japan Day in Aberdeen on June 11 at Cults Academy. The 2016 event was attended by more than 1,000 visitors, which was five times the number of people attending the previous year.

Among those attending the 2017 event are the Consul General for Japan and North East MSP Ross Thomson.

Japan Day began in humble fashion but has grown year on year into a key cultural event in the local calendar.

There will be lots of traditional and modern Japanese cultural activities, including taiko drumming, calligraphy, a cosplay competition, origami, kids’ sumo, martial arts demonstrations and many more – in what is sure to be a fun day for all ages.

Entry to the event and all activities are free.  There will be stalls serving Japanese and Scottish food, as well as other exhibitors from local businesses and further afield.

There will also be a presentation on the ‘Scottish Samurai’, Thomas Blake Glover, who was born in Fraserburgh but went on to become a key figure in the industrialisation of Japan, establishing a shipbuilding company that became the Mitsubishi corporation.

In addition to the poster, organisers will be issuing the programme for the event nearer the time which will include stage performances, speeches from dignitaries such as North East Region MSP Ross Thomson, the Consul-General of Japan, presentations, talks and prizegivings for competitions.