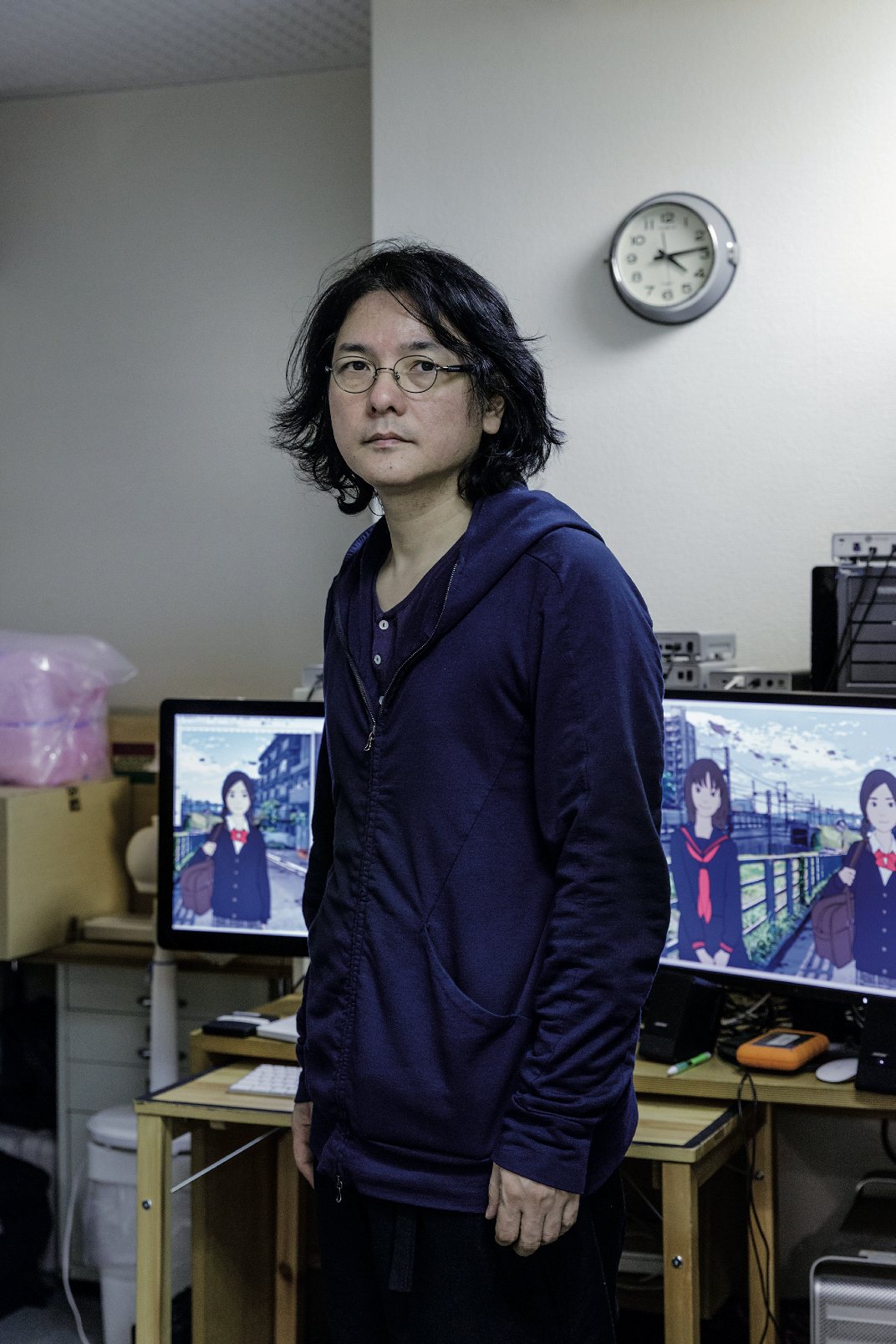 On the release his new picture; The Murder Case of Hana & Alice, the filmmaker reveals what motivates his work.

Ten years after Hana & Alice (the 2004 film that consolidated his fame as one of Japan’s top directors), Iwai Shunji has finally managed to fulfil his dream of making another work featuring the same two quirky junior-high-school girls. Zoom Japan visited Iwai in his studio to talk about the film, animation in general, and the nature of creativity.

When you were at university, did you have any particular dreams? Did you already know you wanted to become a film director?
Iwai Shunji: Well no, I actually wanted to be a novelist. Or a comic artist, as I liked to draw very much. At the same time, though, I was making short 8mm films with my friends, and when the time came to decide what to do with my life, I thought that working with a camera would give me a better chance to make a living. So I found a job making video clips.

You have worked on both feature films and for TV (commercials, dramas and other programmes). How do cinema and TV differ from each other?
I. S.: From a creative perspective they’re not all that different. Of course, making your own film can give you more freedom, particularly if you manage to raise the money yourself and are financially independent.

Let’s quantify that “financially independent”.
I. S.: Let’s say that whenever I reach 100 million yen, I’m more or less free to do whatever I want. Even if I have only 50 million, I can borrow the rest from a bank. Of course, there are limits to what I can do because it’s not a huge sum of money, but retaining creative freedom is the most important thing for me. As you can imagine, with bigger budgets come more restrictions and the need to compromise on many details, big and small, but I’ve never reached that level. The problem with the movie business is that you can have the best story idea in the world, but without money you can do nothing. In my case, the number of aborted projects far out numbers the films I was actually able to produce.

I guess The Case of Hana & Alice had a rather bigger budget compared to a lot of your other work?
I. S.: Well yes, I think we had a budget of about 250 million yen. It is animation, after all. We had to assemble a 150-member strong team to pull this off. And that was just for the drawing and 3D modelling part, which took about eight months. All in all, about 200 people were involved.

Unlike other directors, you have tried your hand at many different genres, from horror to romance, teen films, etc. Why is that?
I. S.: I have the impression that if you stick to the same genre you will end up making the same film over and over again. At least, that’s what I would do. So in order to keep my ideas fresh, I tend to diversify my interests. It’s also a simple matter of curiosity. I have many interests and whenever a new subject or story idea strikes my fancy, I try to turn it into a film regardless of the genre.
Seishun eiga (teen movies) seem to be one of your favourite genres. In 2001, for instance, you made all about Lily Chou-Chou, and even the two Hana and Alice films belong in that genre, even though the protagonists are girls, not boys. How much of yourself can be found in these stories?
I. S.: There is very little strictly autobiographical material, but I guess I put something of myself into every film I make. What I mean to say is, that every project starts when I establish a connection between the subject matter and my personal experience, and I project myself into my characters. In the first Hana & Alice, for example, you can find a part of me not only in Masashi, the boy, but in the two girls as well. I don’t think I could ever make a movie if the subject didn’t move me in that sense. Maybe that’s one of the reasons why I’m not a prolific director.

How has your working environment changed since you began making films?
I. S.: The main change has been the advent of digital technology. I began by making music videos, but when I started to make movies I had to switch to film and analogue technology. It was quite difficult, especially in the beginning, so I was actually quite happy when I was finally able to use digital videos in my feature film work. Apart from that, in general, there has been a documentary boom in Japan. Ten years ago, documentaries where completely ignored, but now it’s much easier to make them and there is also a market for this kind of cinema.

In 2000 you played a director in anno Hideaki’s Shiki-Jitsu (ritual Day). Did you enjoy being in front of a camera for a change?
I. S.: I think it was a very positive experience. I really had fun because I could enjoy being on a set without the problems that are usually connected with directing a film. A director has to supervise and check everything, solve technical problems and direct the actors; it can be overwhelming. Obviously I love it, but it’s very stressful. But actors only have to focus on their job. I also realized that actors don’t need a lot of instructions. Before working in Shiki-Jitsu, I used to be pretty much a hands-on director, constantly explaining what actors had to do and how, but now I think it’s better to give them more freedom. It’s more efficient and I have one less thing to worry about.

Any chance you will ever act in your films?
I. S.: No, I don’t think so. It would be too complicated (laughs). 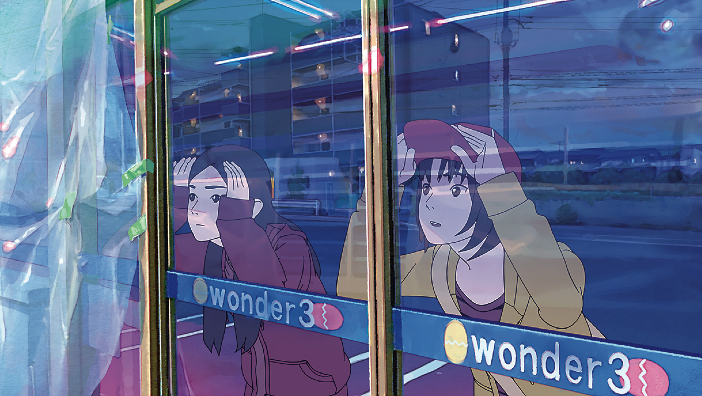 About a decade separates Hana & Alice and The Case of Hana & Alice. How did this second film come about?
I. S.: Actually, the idea of making a second movie was already there ten years ago. As I said, I once wanted to become a manga artist and even contributed to Shonen Magazine, so I definitely wanted to make animation. But, for a number of reasons, I couldn’t make it earlier, so I put it aside and waited until I had another chance. In the end, I think it was for the better, because ten years ago I don’t think I was ready to tackle such a big animation project. I actually spent all these years training as a manga artist, refining my drawing skills, even by making other films’ storyboards. Also, I didn’t know anything about the complicated team work needed in animation, so I went to Studio Ghibli and asked to see how they worked. Then I discovered rotoscoping and realized this was the right approach to animation for me, because it’s a sort of a hybrid of live filming, 3D modelling and hand-drawing. Instead of starting with 3D modelling or drawing, which I had never done before, I could actually shoot the scenes first, as I did with my other films, and then trace over footage, frame by frame.

What is the appeal of animation compared to live filming?
I. S.: Obviously, it’s something you can only do if you love manga and drawing, which I do. But in animation you have to go one step further and actually turn a series of drawings into a moving sequence. And in order to get a good result your drawing technique has to be consistently good. This is something that blew my mind at first. To have all those people making one drawing at a time, and then see the whole thing come to life, was a truly moving experience. If I have another chance I’d like to do it again. Unfortunately, in Japan there isn’t really an audience for this kind of animation. Everybody only wants the otaku kind of anime featuring the stereotypically cute moe girls, or typical TV fare like Crayon Shinchan and Doraemon. The only exception was Ghibli, but they’re gone.

You have being writing movie soundtracks since 2002, but even before that you had a close relationship with the music world. For instance, you’ve asked singers to act in your films, started music projects and, of course, made many music videos.
I. S.: Yes, although when you make a music video the music is already there and you can’t touch it, so you’re not free to do what you want. In a sense it’s like making a silent film and it can be quite stressful. But these problems aside, it goes back to what I said earlier about being moved by something. I’m very curious by nature, and when I like something very much I feel like I want to try it myself. That’s how I began to write music.

Getting back to the subject of animation, in 2009 you produced and wrote the script for Kitamura Ryuhei’s Baton. Has this experience affected your work with The Case of Hana & Alice?
I. S.: Yes, it was a very important step in developing the necessary skills to make my own anime. We used rotoscoping for the first time and stumbled on a number of problems, most importantly the fact that the characters’ faces were too real and not cute enough. In Baton’s case it wasn’t a big problem because of the very nature of the story, but when it came to The Case of Hana & Alice I knew we had to do something about it. So working with Kitamura made me realize the problems I would come across later on my own anime film.

Speaking of cute faces, what was it like working again with Suzuki An and Aoi Yu after a ten-year hiatus?
I. S.: It was a little weird because I actually didn’t feel like ten years had passed. We were working on the same story after all, so it felt more like only one week had passed since wrapping up the first film. It was very nice and I’m happy we had a chance to work together again.