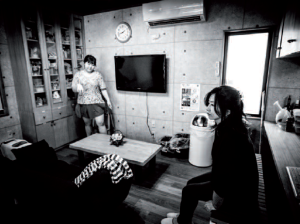 Moriyama Tetsuro experienced house sharing as a student. He decided to make a living from it and has had great success.
Tell me the story of Tokyo Share House.

Moriyama Tetsuro : After graduating from high school I went to Australia to study English. At the time I realized that I could learn more by talking to my host family and room-mates than attending classes. Besides, it was the perfect environment to make new friends and learn about their countries. I ended up living abroad for about eight years and everywhere I went I lived in guesthouses or share houses, always enjoying that kind of communal living. But when I finally came back to Japan I saw that the situation here was completely different and cohabitation wasn’t popular at all. Most people disliked the lack of privacy and thought that share houses were dirty. In other words, the overall image was pretty bad. So I decided to promote them myself and change people’s attitude toward communal living. That’s why we are very careful to include only those places that in our opinion are up to a certain standard.

M. T. : The website went online about two years ago, in the summer of 2011. Right now it’s me and four other people, two of them full time staffers. We introduce places belonging to different owners and act as a kind of go-between. Right now we have about 400 houses on our website, ranging from four-room small houses to a 180-room building that used to be company dormitories but has been renovated and refurbished to meet new needs.

Who is your typical tenant?

M. T. : Most of them are between the age of 20 and 35. 20% of them are foreigners. As for the male/female ratio, 70% of them are women. Perhaps understandably, many of them prefer to share the place with other women, so many of our houses are female-only.

How long is the average length of stay?

M. T. : Of course there are different patterns, so it’s a little difficult to generalize. One thing I’ve noticed is that while many people start with short-term contracts (1-3 months), they often end up staying up to one or two years. Another recent pattern is represented by people who live in one place for a certain time and then move to a different share house. As most places only charge a modest deposit – which is returned when the tenant leaves, minus cleaning fees – moving between share houses is much easier and cheaper than renting a flat, especially when all the places belong to the same owner or agency.

In your opinion, why have share houses recently become so popular in Japan?

M. T. : Probably the main single reason is that they are a very affordable kind of accommodation. When you rent a flat in Japan you often have to pay a great deal in advance. Depending on the place this could be the equivalent of up to 6 months worth of rent in advance, split across reikin (“key money”), shikikin (deposit) and the estate agent’s fees. Not only is this a lot of money but when you move out of the flat you only get back part of the deposit. These economic issues have become more and more important in the last 15-20 years due to the recession. The real change though, has occurred in people’s attitude toward society and human relationships. In particular, people in their 20s and 30s have grown more curious and want to explore different environments and lifestyles. The fact is, meeting people who don’t belong to the same university or company is rather difficult in Japan, as these environments are often closed to outsiders. But in a share house you can easily make friends with people from different walks of life. That’s what makes them so attractive. A recent marketing trend consists in organizing bus tours for university students. We introduce them to a number of houses, so they can see exactly what kind of environment they are and what the atmosphere in them is like, etc.

I understand some companies also organize events, parties etc. Do you do the same?

M. T. : We don’t organize these events as an agency but the owners and companies who manage the houses do and we post this information on our website, so people can log in and click to join them. Some events are open to outsiders while others may have some restrictions, like being female-only. Also, many Japanese don’t speak English well, so sometimes we only advertise an event on the Japanese language page. This does not mean foreigners are not welcome. It only means that they should be able to communicate in Japanese.

For a foreigner moving to Japan, what are the pros of living in a share house in your opinion?

M. T. : They are the same advantages I enjoyed when I used to live abroad myself, namely easier communication with the locals. The Japanese are especially shy when meeting a stranger, so having the chance to get to know each other over a period of time is probably the best way to make friends here. And you don’t even have to be a long-term resident to enjoy this opportunity, because many share houses are open to everybody – even travellers who only want to stay for one week.