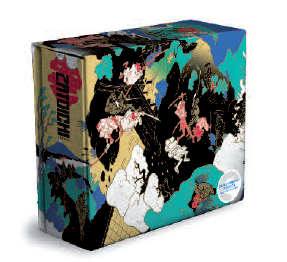 One of Japan’s most popular characters, the blind masseur who handles a sword like no other, is the theme of a wonderful new boxed set.

Twenty-five films starring this legendary character were released between 1962 and 1973, as well as a television series that ran for a hundred episodes (1976-1979), a final film in 1989 and a remake by Takeshi Kitano in 2003… Zatoichi, the legend of the blind swordsman, is one of Japan’s most popular and successful stories. Headed by famous action star Katsu Shintaro in the lead role, the series has become iconic and emblematic of classic Japanese “chanbara” sword fighting films. Criterion, which specializes in quality films, has released a boxed set containing the whole series, as well as many bonus features and a beautiful book including an essay by Geoffrey O’Brien.
It is a pure wonder for lovers of period films (jidaigeki) as well as film lovers in general. Leading man Katsu’s father, Katsutoji Kineya, was a famous nagauta master (the song that accompanies kabuku performances) and Katsu was introduced to the art at a very young age. He became a renowned shamisen player before trying his hand at becoming an actor, joining the Daiei film studio in 1954 and starting out his career with small secondary roles. Katsu imagined he would become a star straight away but grew increasingly frustrated and impatient as he languished in minor parts. He was a fighter, a show-off, a man of action and very headstrong. In many ways he was like Ichi, the protagonist of the Zatoichi stories that he would go on to play. His disreputable side, reinforced by late nights of debauchery, hurt his reputation within the studio and confined him to secondary roles. Early on in their respective careers, Katsu and Raio Ichikawa, who started at Daiei at the same time, became very competitive. Ichikwa was a kabuki actor, and the shamisen player found himself in the star’s shadow until Masaichi Nagata, head of Daiei, decided to turn the loser into a new kind of hero. He sensed Katsu’s charisma that could satisfy the audience with a new kind of antihero. The Zatoichi saga, that follows the adventures of a blind master swordsman posing as a masseur, is a series of period action films (Jidaigeki) that take place during the reign of emperor Tenpo (1830-1844) at the end of the Edo era (1603-1868), a historical epoch often visited in Japanese swashbuckling epics. The overwhelming event of this era, marking the fall of the Tokugawa Shogunate, was an endemic famine that killed off the farming population. In every episode we see Ichi stuff his face with food and these scenes are often presented in a humorous manner but they also reveal one of this era’s biggest problems. The Tenpo era resounds with farmers’ anger that becomes progressively harder to keep under control and explodes into multiple revolts. Travelling from one city to another, Ichi witnesses the tragedies that the farmers and villagers experience due to poverty and famine, while subjected to the predations of lawless gangs. He meets many ronin with tragic pasts, who are symbols of the fall of the empire and sees much wrong with society, but Ichi doesn’t question, nor does he fight the system. Because he was previously a yakuza, he keeps to his position as a yakuza and stands where a yakuza is expected to stand:
outside on the street. He is not involved in the court and clan related intrigues, and he keeps an ear on the political echoes from afar. He stands in the heart of the conflicts that are tearing apart the various yakuza groups, a furious witness to a desperate class of men of that are now betraying their previously cherished notions of honour and dignity. The protagonist’s troubled past is revealed bit by bit throughout the saga. Even his name reflects his status in Edo society. Zatoichi is a contraction of “Zato no Ichi”, with “Ichi” being a derogative nickname for blind people and “Zato” the lowest societal rank amongst them. Zatoichi is thusly marked by his disability and by the flag he defiantly waves in the face of the world. However, Ichi puts his disability to good use as a cover for what he really is. Each film in the series follows a familiar pattern, with the villians or the townspeople making fun of Ichi and looking down on him until he reveals his amazing sword skills, at which point they are dumbfounded or treat him with a new-found respect. The Zatoichi series also used this conceit to bring something new to the chanbara swashbuckling genre by having the main character employ Muraku ryu iaijutsu, the art of drawing the sword and attacking in one fluid and deadly motion. This technique fitted perfectly with the hero’s unassuming appearance and rather than openly carrying his sword, he concealed it in a walking cane until forced to fight. Audiences had never seen a character like this before and were delighted by it’s originality.