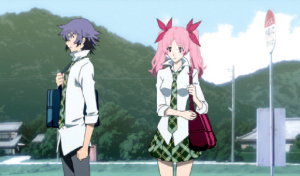 Adapted from Fuyumi Ono’s novel, Shi Ki is a high quality anime that you can now watch on DVD. Full of suspense, this story will send shivers up your spine.

This gothic thriller was adapted from Fuyumi Ono’s novel (The Twelve Kingdoms). Shi Ki will lead you to the outer limits of horror within an enclosed space, where the dead and the living are playing a macabre game of chess. Shi-ki are cadaveric beings better known as vampires. They once only inhabited our ancestral beliefs… until they moved to Sobota! Sobota is a village with a population of 1,300 souls, overlooked by an old castle. Cut off from the rest of the world, the villagers live an untroubled life… without realizing that a terrible curse is menacing them. When Sakoto becomes worried about his colleague Yuki, who has still not come home since the previous evening, doctor Ozaki does not seem the slightest bit interested in his employee’s disappearance. In fact, he is preoccupied with his wife’s dead body that he is secretly hiding in his office. Having been dead for a few days after being attacked by a Shi Ki, Ozaki plans to experiment on her in order to find out more about the curse. Disgusted by the doctor’s behaviour, Seishin disagrees with his friend. Division increasingly affects the villagers… What price will have to be paid to save Sobota, and how will this monstrous situation end? Shi Ki is a suspense anime that hovers between horror and mysticism, although the main plot is easy to grasp. The characters lack a certain depth because the story is not really about them, but rather about the way they behave, about what a human is capable of when under pressure from anguish and fear? The graphics might not please everyone but that does not matter too much. The colours are bright and well mixed. The landscapes are pleasant and representative of a Japanese village lost in the middle of the countryside. All these details allow us to become rapidly immersed in the intrigue. The production is straightforward and efficient, and although the music is not outstanding, it helps emphasize the atmosphere. However, what is most interesting in this adaptation of Shi Ki is the way the story unfolds, while following the progressive deterioration in the characters’ attitudes after each episode. This transformation in their behaviour encourages us to question whether they are really good or bad. We observe the changes caused by the ever-present fear that is wreaking havoc in the village. In this regard the change in the character of the doctor is the most notable. Nevertheless, this series is not for everyone. Some scenes are extremely violent, and it is sometimes quite difficult to suppress ones feelings of disgust. The doctor plans all sorts of disgusting experiments, in which morality plays no part. One of Shi Ki’s most distinctive qualities lies in its demonstration of how human beings always reject the unknown. Shi Ki is a surprising anime. It cleverly combines diverse genres, and has a real depth to it that makes it worthwhile to watch. The second and concluding part will be released on December the 31st 2012.