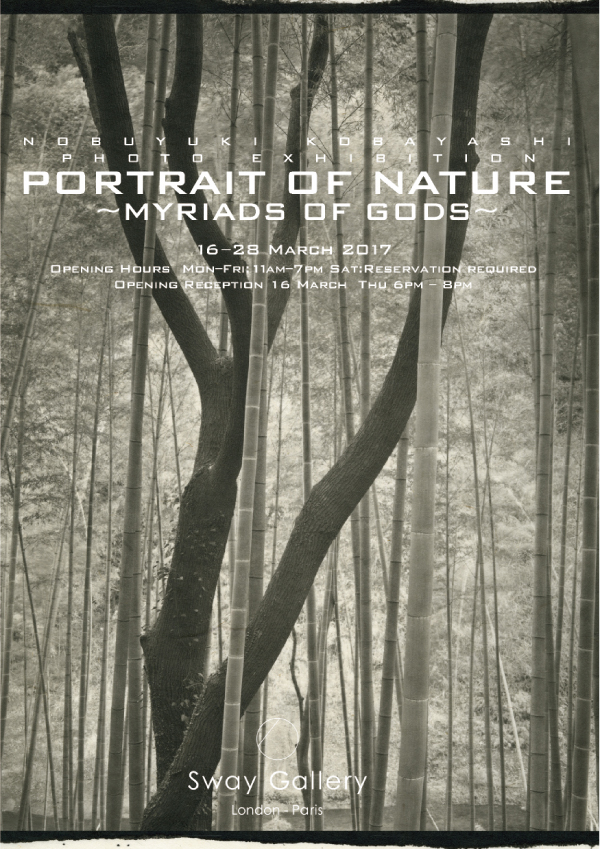 SWAY GALLERY is proud to present the exhibition ‘Portrait of Nature ~ Myriads of Gods ~’ by photographer Nobuyuki Kobayashi.

Kobayashi uses platinum printing, an old technique characterised by having the platinum lay on the surface of the paper while the final image is matte due to a deposit of platinum absorbed slightly into the paper. This gives a delicate and sophisticated finish to the photography.

To utilize the original texture in the support of the print, Kobayashi uses ‘Hosokawa paper’, a kind of washi paper that is rich and full of texture and its manufacturing method has remained the same since 1642.  It is so special that in 2014, Hosokawa Paper was listed on the UNESCO world cultural heritage.

By combining the stable platinum palladium process with the durable Hosokawa paper, Kobayashi believes his prints could last for 1,000 years.

Since ancient times, Japanese people have built culture and values of their own through loving, honoring and making the effort to coexist with nature. The water is a source of life, and mountains as well as rocks and trees are dwelled by gods.

“In a world a hundred years, two hundred years, or even one thousand years from now, I hope that abundant nature still exists and by looking at the same objects, our descendants will feel the same joy – this is my wish.” Kobayashi says.

Kobayashi was born in 1970 and began his journey into photography shooting portraits and fashion photos for advertisements and magazines. In 2001, he began exploring fine art and alternative print techniques in New York. Since then, he has combined Hosokawa paper, a premium Japanese handmade paper, with platinum palladium print, and he has succeeded in creating a graceful and unique atmosphere within his work.

Being a multi award winning photographer, he has participated in numerous solo and group exhibitions all over the world. In 2014 his private exhibition attracted an audience of 15,000 people.