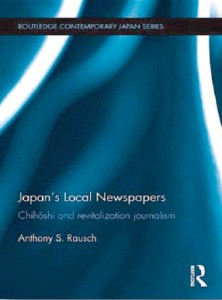 The local press plays an important role in the far flung regions of Japan, but how it works is quite a mystery. A respected academic reveals some answers.

Anthony Rausch lives in TohokuJapan’s northern Tohoku region, in Hirosaki, a city that the Japanese appreciate for its castle and the thousands of cherry trees that surround it. Every year, hordes of Japanese visit Hirosaki to enjoy the transformation of the castle and surrounding park, when the white and pink cherry trees are in bloom. Born in the United States, Rausch has now lived in the region for 22 years and has savoured every moment of it. He is a professor at Hirosaki University and by working with the regional press he has learnt to understand and interpret local customs. He has recently published “Japan’s Local Newspapers: Chihoshi and Revitalization Journalism” (Routledge), an excellent book in which he reveals the role of small provincial newspapers. This work results from meticulous observation inside a newsroom in the northern prefecture of Aomori.

Can you give us a short explanation of the role of local newspapers in Japan?

Anthony Rausch : The major question for most local newspapers is whether they view themselves as complementary to or substitutes for national papers. A role as substitute would demand that they included international and national news, predominantly political and economic, along with local news. A complementary role would allow the local newspaper to forego such international and national coverage and instead focus on strictly local themes. Local newspapers in Japan – defined here as newspapers that operate at the prefectural level – actually adopt both patterns: in essence they serve both as substitute and complementary newspapers. This is evidenced by analysing local newspapers, where you find that the front page is usually a mix of a big national story along with two or three more local stories, after which the next few pages are dominated by national and international stories, with local news provided with exclusive space in several pages near the end of the paper. This dual character can also be confirmed in readership patterns, where for most prefectures there is a fairly even balance of readership percentages for both national and prefectural level newspapers, with the national average at 43% for a national paper and 45% for a prefectural paper. People are reading both levels of newspapers – even though the prefectural papers diligently cover national news along with local news. Of course there are a handful of prefectures for which the prefectural newspaper readership drops below 10% with a correspondingly high percentage for a national paper; conversely, there are also ten-plus prefectures where the readership levels of local newspapers is above 60%, with a corresponding lower percentage for a national paper. This is most likely a testament less to the role of the newspaper than to the level of reading that constitutes a big part of daily life for Japanese. That being said, the local newspaper also contributes significantly to both sense of location for the reader and sense of self for the reader. In this regard, the prefectural newspapers of Japan devote space not just to ‘local news,’ but also to local history, culture, geography, literature, and arts. The paper is providing for the creation and sustenance of local identity for its readers – in a manner that is both highly detailed and educational but which also strongly reaffirms identity of place for the reader. In addition, the papers devote space to themes and issues of importance to various sectors of the population – whether it be the aged who are concerned about health issues, young parents who are concerned about education, or more recently, residents who seek history, context and detailed information on nuclear power generation in Japan. Many local newspapers accomplish this through ‘themed rensai,’ long-running and highly in-depth columns devoted to a specific theme.

During the events of 3.11, local newspapers seem to have played a crucial role (for example the Ishinomaki Hibi Shimbun). What is your take on this?

Anthony Rausch : Over the past year, I have looked at three newspapers specifically from affected areas focusing on 3.11 disaster-related content: the Fukushima Minpo of Fukushima Prefecture, the Kahoku Shinpo of Miyagi Prefecture and the Toonippo of Aomori Prefecture. What I found was on the one hand, what one would expect, but on the other, something very illuminating relating to how the local newspaper was covering the event. First of all, there was a trend to prioritize the event as news, from directly after the event until mid-summer (July), after which many of the ‘themed rensai,’ the long-running and highly in-depth columns referred to above were initiated. While this might be what is expected, the disaster, as an immediate news item, is replaced by the longer view contextualizing it and the event itself is replaced by other news items. These hese themed columns were very revealing in the topics they took up. For the Fukushima newspaper, the focus was predominantly on the nuclear power plant disaster, in a very post-event reflective view. For the Miyagi newspaper, the columns focused on testimonies of the event, retellings of the event through the words of survivors. This was complemented by themes related to recovery, in part focusing on the physical progress of recovery, in part on the human aspect of kizuna, (human ties and bonds). Finally, the Aomori newspaper began a column mid-summer entitled “Lessons from Fukushima”, which, focused on the nuclear disaster, but very quickly expanded the extent of content to themes such as governance and policy considerations, the technology of nuclear power, and the reality of Japan’s propensity for earthquakes, all very forward looking considerations. Considering such media functions as social utility in terms of information; agenda setting in terms of policy direction; hype in terms of perpetuating rumour and hysteria; narrative development yielding human interest stories and social value creation in terms of content that leads to informed citizenry, the local newspapers seemed able to strike a balance by avoiding the negative trends that can occur in post-disaster media coverage, while still emphasizing the positive contribution that media can produce in terms of re-establishing community consciousness and promoting an informed citizenry and intelligent debate.

How do you see the future of local newspapers in Japan?

Anthony Rausch : The answer to this question is reflected in the sub-title of the book: revitalization journalism. I have read my local Aomori newspaper for nearly twenty years. One of the trends that I have noticed over the past five to ten years is the use of the ‘themed rensai,’ the long running columns, in a manner which can be interpreted as contributing to the revitalization of the area. This revitalization is both identity related and economics related. Japanese consciousness is highly Tokyo and urban centric. It is simply a fact of life for a country that is so small, has such efficient transportation and hosts one of the most dynamic cities in the world. This extends to other regions as well, with much of the focus on outlying areas being centred on a dominant municipality. I see the future of the local newspaper as countering this centralization tendency. This ongoing practice of a widely read local newspaper focusing not just on local news, but on the history and character of its host area, brings to local residents a new appreciation of their locale. For local residents, this appreciation can provide an understanding that the value of an area is more than just economic measures of production and growth. As Japan is going through its demographic transition due to depopulation and regional population shifts, it is important that the value of outlying rural areas is reinforced by their inhabitants. Along with that, I have noticed evidence of my local newspaper providing content in these columns that can contribute to the economy of Aomori – not in the creation of a new economy, but rather in the revitalization of the existing economy. So I see the future of the local newspaper as best served by the local newspaper providing for the future of its host locale. And in this highly technological and globally connected world in which we live, that for me is the truest meaning of a local newspaper.