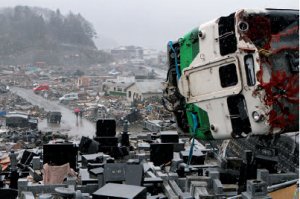 Four years after the tsunami that destroyed everything, including the railway, getting the service going again has been greeted with great enthusiasm locally.

It took four long years to restore the JR Ishinomaki and Senseki lines before the locals could, once again, see the familiar silhouette of the train and hear the characteristic noise as it passed by. It was a potent signal to people who were starting to doubt that the public railway companies would ever function again. Sanriku Tesudo, a small local company, had succeeded in restoring service on two sections of track – Kita Riasu (71km between Kuji and Miyako) and Minami Riasu (36.6km between Kamaishi and Sakari) – long before the vast JR East company, dragging its heels, began to undertake the necessary work for its seriously damaged lines to be functional again. Like the Sanriku Tesudo rail network, the Ishinomaki and Senseki lines ran along the coast, offering passengers unique and beautiful views. However, their close proximity to the sea was fatal during the minutes that followed the earthquake four years ago. The huge wave that swept over the northeast of the archipelago destroyed rail tracks, historic monuments, works of art and the majority of railway stations, leaving only chaos and desolation behind. In Onagawa, the Ishinomaki line terminus, many local people remember seeing a crushed train that had been carried several hundred metres by the powerful wave before coming to rest upside down among some graves on the side of a hill. It seemed to symbolise the death knoll of the regions’ trains. However, the disappearance of the rail connections would have meant condemning the whole region to a slow isolated decline, and this was the reason that those in charge of Sanriku Tesudo felt they couldn’t just abandon their railway lines north of Onagawa. A few days after the 2011 disaster, they succeeded in putting an 11km section of the line back into service, which was an emotional event for the local population. “It moved me as much as when the tramways first came back into service in Hiroshima, three days after having being bombed,” wrote professor Hara Takeshi from Meiji Gajuin University in Tokyo, in his book all about trains and earthquakes. When both the lines were restored in April 2014, Japan as a whole celebrated their return to normal. Railways are important for tourism, but they are essential in local everyday life, especially where many elderly people are concerned. Substituting buses wasn’t considered a possible long-term solution, with the irregularity of road traffic and the sometimes very harsh weather conditions both being good reasons for encouraging work on the JR East lines. JR’s return to full service in the spring of 2015 is very good news, as it is perceived as the turning point in four years of procrastination that did nothing to help in the reconstruction of this region, left desolate by the vagaries of nature.

The renewal of the train service means people can start to consider moving back again. In Onagawa, for example, where the station had been completely destroyed, there was no encouragement to rebuild housing as demand was low due to the lack of public transport. With a railway line functioning normally, the appearance of cities such as Higashi Matsushima, Ishinomaki and Onagawa will change as they regenerate and become active once again. The complete restoration of both these lines marks the end of a long period of recovery after a very bad accident, and an effort must now be made to heal the remaining scars. “Ishinomaki will be able to move forward now,” says Yoshida Azusa, a young teacher for whom the lack of trains has been a nightmare, vastly complicating her regular commute to Sendai for her studies. Scheduled to restart in June, having the 50.2 km Senseki line back in service will be a turning point for her as it will now take only one hour to travel between Sendai and Ishinomaki. According to Sasaki Kazuo, who has been in charge of Ishinomaki station since June 2014, this is a wonderful development. In his opinion, there is no doubt that the city has everything to gain from this return to normal. “We have gone from the reconstruction to the development phase,” he assures. He has also worked closely with JR to promote the region, and according to him, the two lines coming back into service again should act to accelerate tourism. “Until now, it’s been very hard to stabilize the population and stimulate their activities. The train will galvanise trade and attract new blood,” he explains confidently. “It’s obvious that restoring the service will attract the attention of national media, as well as tourist operators, and that will attract people,” he adds. Sasaki can clearly remember the incredible excitement following the opening of the Sanriku Tetsudo service last April. Famous for its sea food and it’s museum dedicated to mangaka Ishinomori Shotaro, Ishinomaki has many attractions for the curious and those who love their food. Ohmi Koichi, the owner of the Ishinomaki Hibi Shimbun daily newspaper, would agree that the town has a lot to offer. He has invested a lot trying to re-energize his region since the tragic events in March 2011, and hails the return to service of the railway line between Ishinomaki and Onagawa as fundamental to the effort to move the region away from the isolation it was plunged into in the wake of the devastating tsunami. “This project aims to regenerate an area that lost 80% of its population,” he confides. “Onagawa is both a terminus and a departure point on the railway line, which gives it added importance”. He clearly has faith in the potential of his city as he describes the work and transformation that are still to come.

There are already many projects in progress around Onagawa station, which was designed by architect Ban Shigeru and will be inaugurated on March the 21st. The fact that the Pritzker Architecture Prize laureate of 2014 is the station building’s project manager is important, as he was also very much involved in the building of the city’s emergency housing (see Zoom Japan no.19, April 2012) – so it is somewhat of a logical continuation. Most of those wanting to support the city’s regeneration hope that the project will be helped by Ban’s powerful vision. “Taking care not to a rebuild in a way that would Ishinomaki hibi shimbun spoil the view is a good idea,” says Ohmi Koichi, indicating the magnificent vista of the the bay. “Now that all the land facing the sea belongs to the city authorities, a 15 metre wide trail will be created so that travellers leaving the station can walk directly down to the sea, where they will find a shopping centre and a park,” he explains. Ohmi has fought so that Onagawa could both survive and retain its character, unlike other cities that were destroyed by the earthquake and whose restoration is in the hands of bureaucrats who lack imagination. “Urban planning is not for bureaucrats. If those who can change things don’t do so, then nothing will happen,” says the head of Ishinomaki Hibi Shimbun, glad that this isn’t the case in Onagawa. Right next to the station, a spa complex called Yuppopo is being built, and the main shopping street should be ready by the autumn of 2015. It will allow both inhabitants and tourists to enjoy fresh seafood from the bay. The official inauguration of the Ishonomaki line will doubtless be greeted with tears of joy, just like last year when the Sanriku Tetsudo lines were reopened. Trains still inspire a great deal of emotion in Japan, perhaps nowhere more so than this beautiful region which both locals and visitors will soon be able to see again.