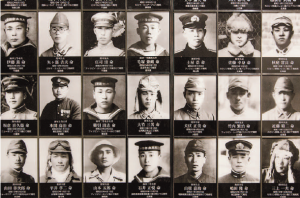 A visit to Yasukuni Shrine and provocative declarations means that the past never ceases to create waves.

On December the 26th last year, Prime Minister Abe Shinzo travelled to Yasukuni Shrine, where the memory of those Japanese who died for their country is honoured. Amongst them are 14 Class-A war criminals, a fact which has once more triggered the wrath of Japan’s nearest neighbours: the People’s Republic of China and South Korea. Even the United States expressed its “disappointment” following the extensive media coverage, which added to the enormous tensions the region was already experiencing. Whatever the Prime Minister and diplomats said to justify their presence in this controversial location, the shrine symbolises a vision of Japan’s history that is different from that taught in the rest of the world. Criticism of the government for showing such scant regard for the past have continued to grow to such an extent that the Chinese government, although accused of behaving aggressively, has succeeded in taking advantage of the opportunity to once again point out Japan’s revisionist tendencies. During a recent trip to Germany, Chinese President Xi Jinping asked to visit the Holocaust memorial in Berlin to highlight how well the Germans have dealt with the remembrance of their aggressive militaristic past. After a summit meeting on nuclear security in The Hague, in the Netherlands, in late March, Prime Minister Abe visited Anne Frank’s house in Amsterdam, but that did not help extinguish the fire he had ignited earlier. In addition to this, some close colleagues of his who were recently nominated to important positions in NHK, the public broadcasting company, issued statements questioning the existence of ‘comfort women’ and whether the Nanking Massacre perpetrated by the Imperial Army actually took place. Rather than distancing itself from these allegations, the Japanese government confirmed that it could not condemn such remarks made in a personal capacity; a shocking attitude that illustrates the prevailing tendency in the country over the past few years. Patriotic education has become a priority, so it unlikely that those public figures who are tempted to forget the past will change their attitude. In the current climate of diplomatic tensions in Asia, the government of Japan is trying to encourage a national pride, and this initiative appears to be working. The day following the visit to Yasukuni Shrine, the Prime Minister’s popularity leapt in the opinion polls. At the same time, the archipelago’s cinemas were showing a cinematic adaptation of patriotic war novel” The Eternal Zero by Hyakuta Naoki. The film was top of the box-office for eight weeks and it is still being screened, which is quite rare for a feature film released six months previously. Interest in the sacrifice and the role of kamikaze pilots is increasing. Recently, the mayor of Minami-Kyushu, a city where pilots were trained for suicide missions, suggested that the letters left by these men should be added to the Unesco World Memory Register, alongside the Declaration of Human Rights and Anne Frank’s Diary, registered in 2003 and 2009 respectively. All this contributes still more to the confusion and mixed messages sent out to the rest of the world.