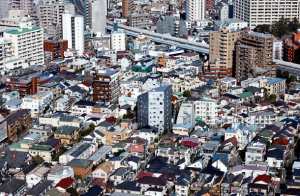 Japanese houses are not just works of art to be stared at in confusion on the pages of coffee-table books.

What kind of images come to mind when you think of Japanese architecture? What do you imagine when you describe Japanese cities? Most of the time you think of skyscrapers, narrow streets and such a high population density that you’ll have difficulty believing that Japan has been called the “archipelago of the home”. You don’t have to leave the centre of Tokyo or any other big city, however, to discover that this epithet is true, and amazing houses can be found right there. They are an integral part of the city, more so than in some European capitals, where owning a house is only achieved with a great deal of effort or a fat wallet. This is not a new trend in Japan; as far back as 1937, the German architect Bruno Taut was interested enough to write about it in his milestone book: Houses and People of Japan (English translation out of print). In this major reference work, Taut endeavoured to give his readers the opportunity to discover local culture through houses, as he recognized that they were homes for people first and foremost, rather than just works of art, although these famous “Japanese houses” are often presented as such in the glossy pages of beautiful books. Shown off in the best possible light by talented photographers, they appear like still-life paintings you might see while visiting a museum on a rainy day. Life is absent, despite the fact that these houses were designed to be lived in. They represent innumerable examples of how people live in the city, and it is precisely all the different ways they are lived in that demonstrate the skill that went into their design. It is this sense of life and the lived in that we intend to present in this month’s feature on Japanese housing and it’s architecture. It also coincides with an exhibition about Japan called “the archipelago of houses” taking place between the 24th of June and 7th of September at the Cité de l’Architecture et du Patrimoine in Paris (1 Place du Trocadéro et du 11 Novembre, 75016, Paris). The Japanese house is much more than just a roof and walls. It is a way of life that has most certainly evolved over time, and began to conform to western standards around the start of the 90s. Today, it seems as though there is a return to basics and the desire to create spaces where individuals, who have tended drift apart from one another, can rediscover the pleasure of being together. This need arose after the financial bubble burst, causing widespread insecurity, and was reinforced by the tragic events of the 11th of March 2011. The concept of “Houses for all” (Minna no ie), for which Zoom Japan is one of the sponsors, has brought together many Japanese architects in an attempt to create places “to bring people together” and is an example of this evolution. All the architects we have met for this feature emphasized that this trend will only increase in a country where an ageing population is a big issue. Consequently, Japan can be considered as an architectural laboratory from which other industrialized societies, in the process of experiencing the same phenomenon, can find inspiration or at least learn some lessons. Let’s hope this article can change preconceptions of Japanese architecture somewhat, and that peoples views about it will become less prejudiced.