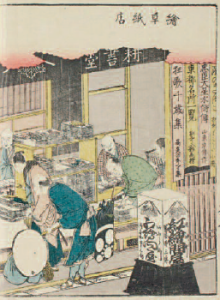 Hokusai’s talent would not have gained such great recognition without the help of the publishing houses.

One cannot talk about artists such as Hokusai without mentioning the publishing houses that played a major role in distributing their work. As commercial enterprises, the publishers demanded a high standard of work from their artists and the nature of this sometimes tense relationships is frequently portrayed in the animated film Miss Hokusai. At the beginning of the Edo era, publishing first started to take off in the country. First in Kyoto, with its writers and monks, then gradually all across Edo where a more urbane and popular culture took root, although the first published works were almost exclusively composed of texts for a very limited audience. Published in Saga, to the far west of the imperial capital, these books were called Sagabon (books from Saga). Very few of the early titles were illustrated, but due to the success of illustrated works, and the need to find a larger audience for simple financial reasons, publishers started offering books containing more images, even sometimes with no text except for a preface. These books became more popular from the early 18th century onwards and haven’t stopped growing in popularity. Making the most of people’s keen interest, publishers established a close relationship with their readers, creating a lucrative demand. In the early spring, publishing houses were in the habit of announcing their new publications to encourage readers to visit the book shops. These were well stocked and had many clients wishing to discover the latest releases. Commercial piracy was common, although copyright (hankabu) was, in principle, protected. The very existence of pirated copies proves that such books were commercially profitable. The sweeping improvements in communication networks across the archipelago under the Tokugawa regime were another major factor in the expansion of book distribution. Besides peddlers who specialized in selling books, dedicated bookshops started opening almost everywhere, with some even arranging book loans (kashihonya). This system, which was widespread and lasted for a long period of the country’s history, enabled an increasing number of Japanese to read books they otherwise could not afford to buy. As time went by the artists of the “Floating World” became more involved in the publishing process, after seeing the great success of illustrated books. Meanwhile, improvements in reproduction techniques soon allowed publishers to create and sell single copies of an artists’ work. In Edo, with a population of more than one million, the demand for such mass-produced works was great. For the artists, publishing became an important source of supplementary income. Massmarket books contributed to their fame and the top artists names became more visible, which had not been the case in the early years of this publishing adventure. Hokusai and his daughter were at the forefront of this process, allowing them not only to live well but also gain in respectability among a readership that appreciated the quality of their craftsmanship.