Without the creation of this link between the Sea of Japan and the former Imperial region, Japanese cuisine would undoubtedly never have reached the level of refinement that has made it world renowned, and the prefectures of Fukui and Shiga would never have experienced such a level of flamboyance.

Thanks to their geographic location, the prefectures of Fukui and Shiga – located between the Sea of Japan and Kyoto – have benefited from the wealth of seafood as well as all the goods brought in from the north. From the start of the 18th century, Kitamaebune, literally “ships from the north”, contributed to the consolidation of the local economy and culture. They brought mainly kombu seaweed, fish, rice and animal hides from the northern regions, which were then unloaded in Tsuruga to be transported across Lake Biwa to Kyoto. This trade was in addition to the mackerel and sea food from the Sea of Japan which was transported overland to the Imperial capital. Known as the Wakasa Road (Wakasa-kaido), it’s also called the Mackerel Road (Saba-kaido). Many traces of it can be found to this day, whether in Kumagawa or Kutsuki. Travelling along this route, one can understand how crucial it was to Kyoto’s development, particularly in terms of its culinary influence.

(left) Taking advantage of their geographical location between Kyoto and the Sea of Japan, the prefectures of Fukui and Shiga were able to benefit from the trade of goods transported by ship from the north of the Archipelago.
(right) The route of the Wakasa Road and the navigable waters of Lake Biwa.

The Wakasa Road – which starts in Fukui Prefecture – is, above all, about taste. Okui Takashi is not one to disagree. The proprietor of Okui kaiseido, located in Tsuruga, knows a thing or two about it as his main activity is trading in kombu. Not any kombu, but “the best in Japan,” he says with pride. This seaweed is an essential ingredient in dashi, the condiment that is the basis of numerous Japanese dishes, and comes from Hokkaido. For hundreds of years, it was Kitamaebune ships that carried this precious commodity so it could be sent to Kyoto where great cooks knew how to refine it. Mr. Okui trades in all kinds of kombu harvested throughout the whole of Hokkaido. He has no hesitation in comparing it to the best French vintage wine as, in his estimation, its fine quality allows one to create exceptional dishes. Heir to an age-old tradition, he embodies the kind of merchant who helped Tsuruga become wealthy, as testified by the magnificent building of the former Owada Bank, now transformed into a museum in honour of the Kitamaebune. 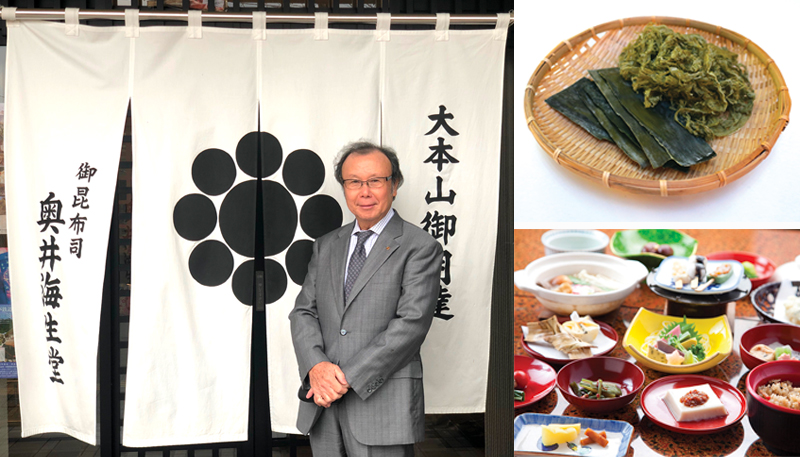 Okui Takashi sells “the best kombu in Japan”, an essential ingredient in dashi.

Other products were brought to Tsuruga and Obama, the second port in the region, en route to Kyoto. Chiefly, it was mackerel, which was caught in great quantities in the Sea of Japan. Trade in mackerel increased to such an extent that the Japanese ended up naming the Wakasa Road, the Mackerel Road.
The starting point of this famous route can be found 5 minutes away from the station in Izumi-cho shopping arcade, in Obama. A plaque and a small museum recall the importance of trade with the former Imperial capital, which allowed the whole region to enjoy a long period of growth. The journey to Kyoto of around 60 kilometres used to be undertaken on foot, on horseback or by boat if the traders chose to take advantage of Lake Biwa to gain time. Whichever mode of transport was chosen, a large part of the journey was overland and included several staging posts.

Among these, Kumagawa has preserved its appearance of yesteryear. In the midst of the perfectly preserved and maintained houses, it’s very easy to let yourself be transported back into the past and imagine you are living at a time when the main street witnessed 1,000 horses laden with all manner of goods pass through every day. The local history museum situated in the heart of this charming place, is a reminder of how important Kumagawa was as a staging post between Tsuruga and Kyoto, while at the same time it fostered the strengthening of their cultural and religious ties. 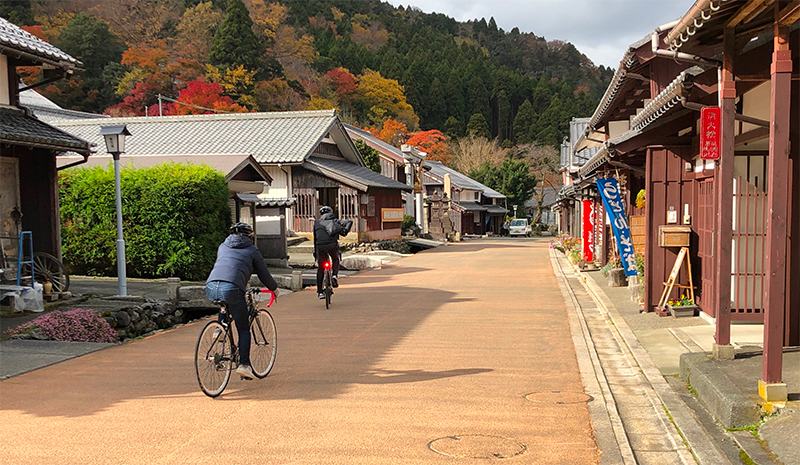 Kumagawa was one of the important staging posts on the Wakasa Road.

The Wakasa Road was not just limited to the supply of earthly needs. It possessed a spiritual dimension, perfectly illustrated by two sites among many others: the Jingu-ji shrine and the Mantoku-ji temple. These two architectural treasures underline the relationship that has existed for a very long time between the Imperial cities of Nara and Kyoto, and Fukui Prefecture. This is the reason that every 2nd of March for the past 1,200 years, the festival of omizu-okuri (sending water) takes place at the Jingu-ji shrine, during which Buddhist monks and Shinto priests prepare the holy water that will be used in the great Todai-ji temple in Nara.
Not far from there the Mantoku-ji temple not only has a wooden statue of a seated Buddha – Amidanyorai, designated as an important National Cultural Treasure – but also a magnificent garden created on the orders of the Sakai clan who ruled the region at the time. Situated in the heart of unspoilt countryside, they are a reminder of the importance of local tradition and its assimilation into the country’s history thanks mainly to the existence of commercial trade links via the Wakasa Road. 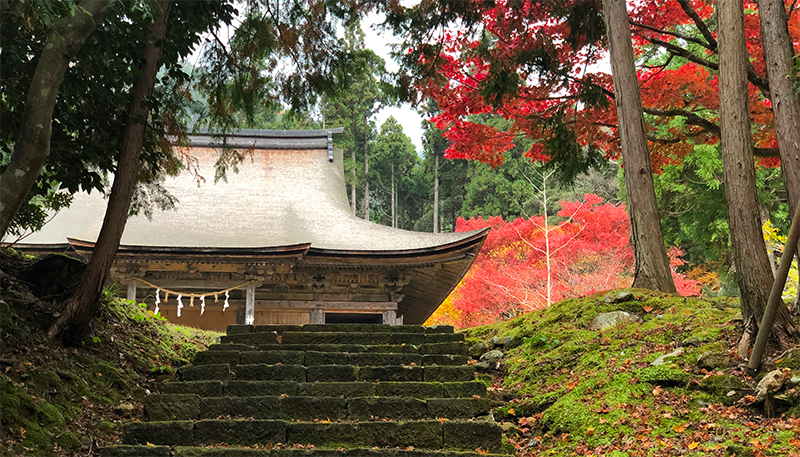 A little further to the south, in Shiga Prefecture, Kutsuki was also an important staging post on the Mackerel Road. Strolling around it, you very quickly come to understand how trade contributed to its wealth and modernizations. Though it has not managed to preserve its Edo period appearance (1603-1868), there are more recent buildings to admire that bear witness to its dynamism. There is for example the former Kutsuki Post Office, which was built around 1938 and designed by the American architect, William Merrell Vories, who worked extensively in the region. Maruhachi Supermarket built in 1933, now designated as a historic monument, also attracts the interest of visitors. Close by, you will find the Kosho-ji temple whose garden is especially lovely in autumn when the trees are a sea of colour.
As far as cuisine is concerned, there’s no lack of places in Kutsuki where you can enjoy excellent sabazushi (mackerel sushi), which also testifies to the key role played by trade. 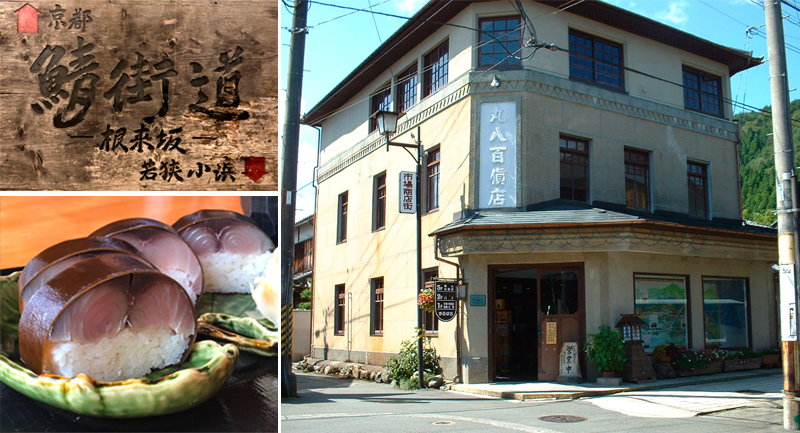 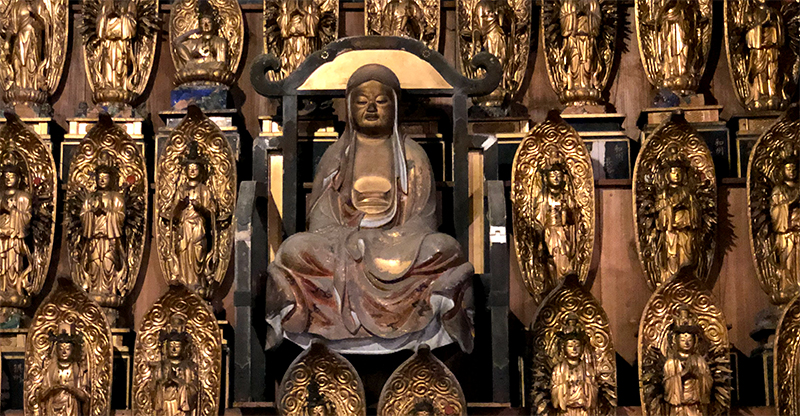 Besides its remarkable sculptures, Kosho-ji temple in Kutsuki boasts a magnificent garden.

Lake Biwa is not far away. The largest stretch of fresh water in Japan also served to transport goods from the ports along the coast of the Sea of Japan. After completing part of the journey overland, some of the merchandise was loaded onto Marukobune sailboats before heading to the southern tip of the lake, the very entrance gates of Kyoto. These boats, which are part of the region’s heritage, which contributed to the success of the Wakasa Road, have disappeared from the landscape. But one man, Matsui Mitsuo, owner of the Matsui shipyards, is determined to keep their legend alive. He continues to build boats using traditional techniques and plays a part in the conservation of Marukobune method. Though these boats contributed to the history of Lake Biwa, the latter has many assets of its own, notably culinary. Among these are funazushi, considered to be the forerunner of sushi. At the head of Uoji, founded in 1784, Sazaki Kensuke is the worthy representative of this long tradition. Funazushi are made with nigorobuna, a type of fish native to Lake Biwa.
It starts with a method of preserving the fish that consists in letting them marinate in salt before pressing them into cooked rice. The result of the lactic fermentation is a product that is now greatly prized for its fine quality and unique flavour. It has helped enhance the deserved reputation of Lake Biwa, whose proximity to the former Imperial capital also confers it with a sacred dimension. 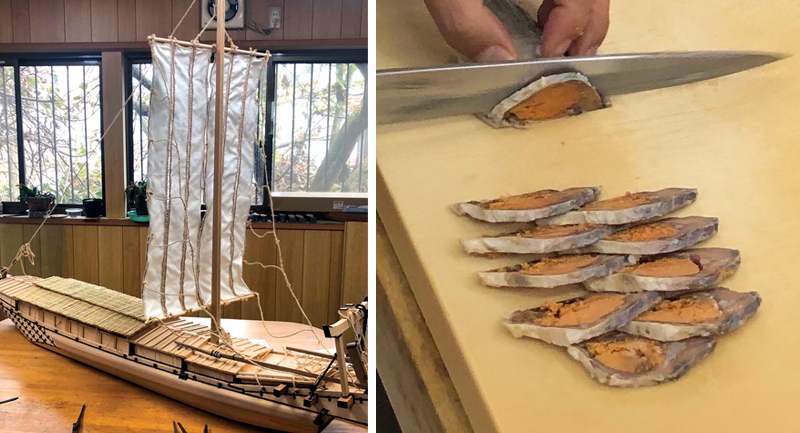 Marukobune sailed across Lake Biwa for a long time where nigorobuna, essential for making funasushi, are caught.

The Shirahige-jinja shrine with its imposing torii rising from the waters illustrate this well. Named “Itsukushima of the Omi region”, a reference to the celebrated sacred doorway off the coast of Hiroshima which has become a symbol of Japan, this torii is a reminder that the lake is protected by the gods who ensure the safety of those using it as a means of transport. This was essential for all on the Wakasa Road, whether travelling on land or water. A large part of the rich heritage of taste connected to Kyoto would never have flourished without it. 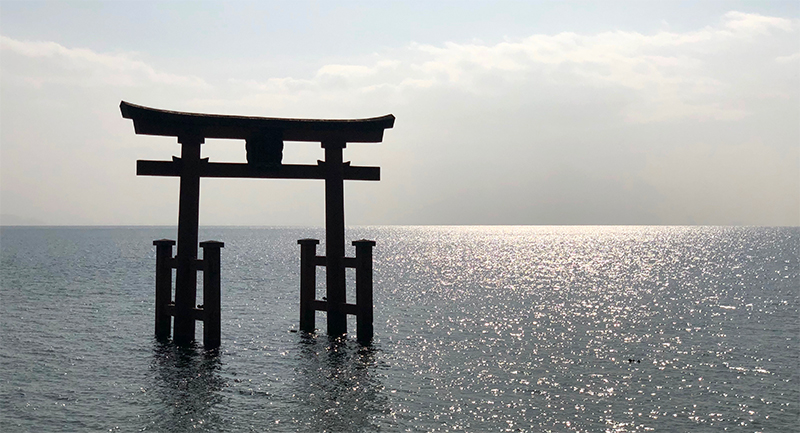 The large torii of the Shirahige-jinja shrine looks out over Lake Biwa.

Get to the prefectures of Fukui and Shiga, the most practical way is still by train. From Kyoto, it takes around 90 minutes to reach Tsuruga via either the JR Kosei line or the Hokuriku main line. From Tsuruga, take the JR Obama line and count on it taking around 60 minutes to reach Obama.

•To take advantage of Kumagawa and its beautiful surroundings, you need to get off at Kaminaka on the JR Obama line. A ten-minute bus ride will take you to the Wakasa Kumagawa bus stop.
•To reach Mantoku-ji (09.00-16.00, 400 yen) and Jingu-ji (09.00-16.00, 400 yen) takes about 20 minutes on foot from Higashi Obama station, but it’s worth the effort to see these two beautiful locations, especially in the autumn.
•To visit Maruhachi Supermarket you need to get off at Adogawa station on the JR Kosei line, then take the Kutsuki line Kojaku bus as far as the Kutsuki-gakko-mae bus stop, then it’s 5 minutes’ walk away.
•To appreciate the full beauty of Kosho-ji and its Buddha, which is classed as an important National Cultural Treasure, leave the train at Adogawa station on the JR Kosei line. Take the Kutsuki line Kojaku bus in the direction of Hosokawa. After about 30 minutes, get off at the Iwase bus stop and it’s 5 minutes’ walk away.
•To get some funazushi from the Uoji company (08.00-19.00, closed on Tuesday), go to Makino station on the JR Kosei line, which also serves Tsuruga departing from Kyoto, then it’s about 20 minutes’ walk away.
•The Shirahige-jinja shrine is situated about 30 minutes’ walk away from Omi Takashima station, on the JR line.