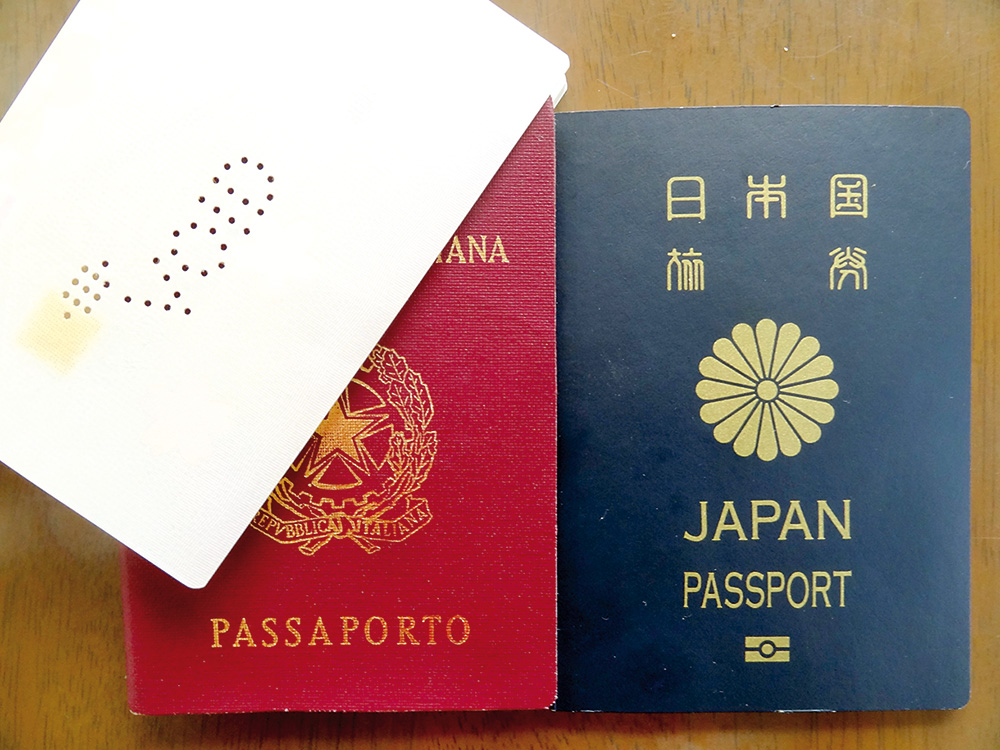 some foreigners who have lived in the Archipelago for a long time have chosen to become Japanese nationals.

In the previous articles we’ve seen what being Japanese means from a social and cultural point of view. But what if you want to get naturalised and become legally Japanese? Is it difficult? Is it even possible? and who exactly can acquire Japanese nationality? Becoming Japanese may not be for everyone (read on to see why), but it’s perfectly possible. Between 1868 and 2015, 581,000 people legally became Japanese, and even now, thousands get naturalised every year.

The best source of information on these matters is Becoming Legally Japanese (www.turning- japanese.info), an English website full of forms and documents, step-by-step instructions, statistical data and stories about people who’ve acquired Japanese nationality. The website is run by INOUE Eido, a former american citizen who used to be called adrian David Havel until he became Japanese in 2010. Originally from washington D.C., INOUE came to Japan in 1992.

“People often ask me why I became Japanese,” INOUE says. “I came to Japan straight out of college. Twenty years later, I was still here and had invested so much in Japan, emotionally, financially and career-wise, that I knew moving to another country would be difficult. In other words, I realised I’d become a lifer, and the odds of changing course were minimal. So I came to the conclusion that it made sense to invest fully in this country and obtain all the rights that other nationals have. You could say it was a logical conclusion.”

The catalyst for taking the big step was INOUE’s long-term assignment in the US on behalf of his company. “at the time, I thought it was a good opportunity for my family to live in America for a while. Indeed, it was a good experience, but we also realised we were happier in Japan.”

according to INOUE, changing nationality is a little bit like getting married. “It’s not something you should take lightly,” he says. “It’s a commitment for life. That said, you can actually give up your Japanese nationality and adopt a new one if things in Japan go wrong and for whatever reason you don’t want to be Japanese anymore. I could even become American again, however, I’d have to get in line with all the other foreigners and do the same as they do.”

On the technical side, the Japanese requirements for changing nationality are very similar to many European countries. “Basically, you don’t have to be rich, but you must have a stable source of income,” INOUE points out. “You don’t have to be culturally assimilated, but it’s generally a good idea to know the language because you are likely to have fewer problems in terms of having a job, etc.” The main requirements to qualify for Japanese citizenship are:

1. Be legally domiciled in the country for five consecutive years. The legal part is very important to prevent people using naturalisation as a loop- hole to avoid being deported.

2. You must be financially independent. In other words, they don’t want you to become a welfare recipient. In addition, of course, you should speak enough Japanese to do your job.

3. You can’t have a criminal record either in Japan or overseas, or any connections with organised crime.

4. You can’t be a member of an organisation that advocates the violent or illegal destruction of Japan.

5. You have to be willing to give up all other nationalities.

Contrary to many people’s opinion, having a permanent residence visa is actually not a prerequisite for becoming a Japanese citizen.

“The last requirement, point (5), is what stops most people from becoming Japanese,” INOUE says. “In my case, I can no longer vote in the United States or stay there for a long time without a visa.” Inoue’s daughter was born before he became Japanese, so she still has dual nationality. Regarding point (2), Inoue says that anything above a 250,000 yen (£1,800) monthly salary should be okay, even though living on that amount of money in a big city is going to be rather challenging. “However, more than how much money you earn, they’re concerned about stability,” he adds. “For instance, if your income comes from a bunch of one-year renewable contracts, that doesn’t look good. If, on the other hand, you’re a full-time employee, you’re good to go.” applicants are required to work with a caseworker from the Ministry of Justice before they can officially apply. “You have a series of interviews with a person who’s in charge of preparing the folder of documents you’re going to submit,” INOUE says. “For example, you have to show all your bank statements, tax receipts and tax records. If your caseworker sub- mits the folder on your behalf, your chances of approval are more than 95%, and most years it’s actually closer to 99%. The dropout rate (people who give up before submitting all the paperwork) seems to be between 25% and 33%.”

Evan Koehler – or KORa Eiji, as he is now called – says that the application process was the hardest thing he has ever done. “It was like having a full- time job,” he says. “I had to finish 100 pages of paperwork. I had to ask every member of my family back in the US to send their birth certificates and my parents’ wedding certificate. It got really personal. My mum, for example, had to write a letter in English (that I later translated) saying she hadn’t had any kids except with my father. “Going through the list was time-consuming, tedious, frustrating, and sometimes they ask you to redo something. I also had to talk to old employers. Thankfully, there were resources online to help me along the way. The Becoming Japanese website was extremely helpful. Finally, they came to my house to check if I really lived there. They looked everywhere, even opened my fridge to check for food. But they always ask before opening something, in case there’s something personal inside that you don’t want them to see.”

In order to avoid KORa’s stressful experience, other people prefer to pay an agency to do all the hard work and make the whole process easier. a big part of the application process is the interviews, which are all in Japanese. “I was really worried at first because I thought I had to be really careful about what I said, like not making any grammatical mistakes,” INOUE says. “But the guy was surprisingly reasonable, always explained why we were doing a certain thing, and helped me a lot. I realised he was there to help me, not discourage me. at some point they interviewed my wife too, in order to understand if our marriage was legit or just on paper. I thought she was going to blow it for me because she likes black humour and always makes inappropriate jokes. when my caseworker asked why I wanted to become Japanese her reply was, ‘beats me, I wouldn’t want to become Japanese myself.’ Thankfully my caseworker laughed, he thought it was funny. So all in all the interviews are pretty light-hearted.”

One thing an applicant should never forget is that these things can’t be taken lightly. “what they don’t like is when you waste their time because they’re really busy doing one interview after another,”

INOUE says. “So if they say that next time you have to bring document a, B and C, you’d better not forget because they get annoyed. They’re very efficient and expect the same efficiency from you.” One thing most applicants work hard at is the motivation essay that must be written in their own handwriting. “at the time, my kanji looked terrible because I always used computers,” Inoue says, “but, anyway, I managed to get five pages written and I thought I’d done a pretty good job. Then my caseworker read it through, very slowly and carefully, and in the end just said, okay, that’s acceptable.”

Once you’re officially Japanese, you’ll have your own koseki or family registry and a new name. Your name doesn’t have to sound Japanese, but it must be written in one of the three Japanese alphabets: kanji, hiragana or katakana. Just remember that if you’re married to someone Japanese, you and your wife must share the same surname. You can either adopt your wife’s surname or you can both adopt a brand-new name. “I ended up taking up my wife’s name, that’s very common in Japan,” INOUE says. “Then I adapted my first name to the kana alphabet, and chopped it a little in the process to make it easier for Japanese people. That’s how adrian became Eido.”

People react in different ways when they know that someone has changed citizenship. “The people who are surprised or have a problem with my being Japanese tend to be non-Japanese,” INOUE says. “The Japanese – especially those who’ve known me for some time – already knew I was here to stay, so naturalisation doesn’t really make much of a difference.”

For another former american citizen, Henry More- land Seals, “recognition” was a keyword in deciding to become legally Japanese. “I’m kind of cynical and I know the Japanese never see me as Japanese, being black and all that,” he says. “But when I tell them I’ve become a citizen I can see them change. I gave a speech recently and when I said I had be- come Japanese the whole room went like “whoa”. That’s the power of recognition. They may not even like me, but my choice had an impact.” Speaking of impact, KORa says that the thing he likes the most about becoming Japanese is that he can now make his own small contribution to his adopted country. “The right to vote is definitely one of the best things about becoming Japanese,” he says. “You can do something about stuff you don’t like. Relatively few people vote in Japan compared to western countries, so when you do vote, you can really change things.”