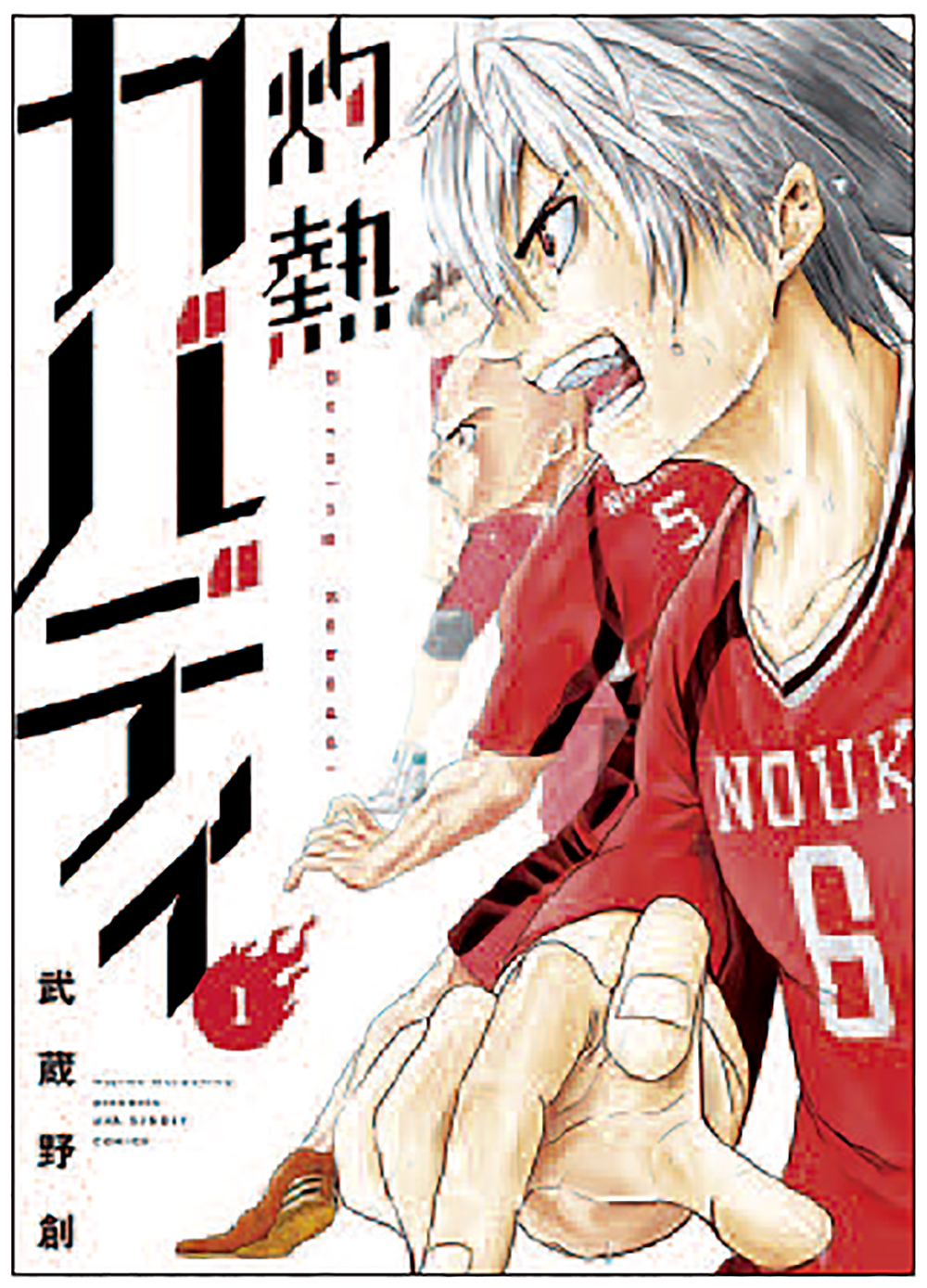 Shakunetsu Kabadi by MUSASHINO Hajime is all about kabaddi, an Indian contact team sport.

As time goes by and with a more diverse readership, writers are exploring new horizons and new disciplines.

As explained in our introductory essay, Japan is a baseball-loving country. Baseball is not only the most popular sport, but it has also dominated the manga publishing market since the mid-1960s. most people in europe fail to appreciate baseball’s charm, but what American and Japanese fans like about this sport – the psychological factor of the duel between pitcher and hitter (almost a modern version of a gun or sword fight) – are the very elements that make baseball manga so appealing to male readers. The only time when baseball’s supremacy was challenged was in the first half of the 1990s, when football suddenly became a trendy sport. After years of declining popularity and dreary amateur games (each team represented a corporation) the Japan Professional Football League (J.League) was launched in 1992. Those years saw the birth of many football manga and anime, but the sense of novelty and fan interest waned after a while, and baseball quickly regained the top spot.

Even today, baseball is by far Japan’s most popular sport (42.8% according to the Central Research Agency’s “Popular Sports” survey) and, not surprisingly, it still dominates the world of sports manga. According to Wikipedia’s Japanese page – usually a pretty reliable source of information on manga culture and history – a mind-boggling 400-plus baseball manga have been published since the 1960s. In comparison, football (at 22.8% the country’s second most popular sport) is represented by some 200 manga titles, while sumo (20.1%) has “only” 66 and tennis (19.8%) 50. Other popular sports manga include golf and volleyball (around 40 each).

Then there are those sports that without having a particularly large following do very well on the manga market. The leader in this category is boxing. Usually under the 10% mark in the popularity survey, it can nevertheless boast nearly 80 titles – second only to baseball and football. And what about figure skating? It doesn’t have a long history in Japan, yet around 50 comics are devoted to it thanks to the Japanese athletes’ recent stellar performances on the world stage. Last but not least, professional wrestling is more akin to performance art than a sport, but in Japan it is often treated as such and rivals boxing in manga’s total output.

Just a quick glance at market data and fan lists highlights a few important characteristics of sport manga: first of all, as Allen Guttmann and Lee Thompson have stated in their book, Japanese Sport: A History, the vast majority of sports represented in manga began either in America (baseball, volleyball, basketball, etc.) or europe (football, golf, tennis), which highlights the way Japanese society and culture have been gradually Westernised from the second half of the 19th century. Indeed, apart from sumo, the only Japanese sport that features prominently among manga is judo with 34 titles. The second noteworthy characteristic of Japanese comics – the most glaring thing one notices – is that almost any sport, even the most exotic, unglamorous or spectator-unfriendly one, has a chance to become a manga subject. Name a sport, and chances are someone has made a comic about it. And this trend seems to have become even stronger in the last decade. To give you just a couple of examples, Asahinagu (2011) is about a high-school girl who takes up naginata fighting. Naginata is a bladed pole that was originally used as a weapon by warrior monks, the samurai, and female warriors during the feudal period. As a modern martial art it is certainly less practised than judo, karate or aikido. But Asahinagu, which first appeared in 2011, is still being published, and was even adapted into a stage play and live-action film starring members of the Nogizaka46 idol group.

Then there is Shakunetsu Kabaddi [Red-hot Kabaddi], a story about… kabaddi, a contact team sport that is incredibly popular in India and Bangladesh, but that most other people have never heard of. Still, Japan has its own national team, and the manga has been a series since 2015. An important recent trend in sports manga is the rise of works aimed at female fans. The Nikkei newspaper, for instance, recently conducted a survey of readers of best-selling Weekly Shonen Jump magazine and found out that 66.8% of the people who read volleyball manga Haikyuu!! [ed. Viz media] and 58.9% of Kuroko’s Basketball [Kuroko no Basuke ed. Viz media] fans are women. Another work that originally began as an anime series but was later adapted as a manga is Yuri!!! on Ice, about the world of figure skating. (Interestingly enough, while more and more females seem to be interested in sports, an increasing number of males read “magical girl” stories and other typical shojo manga).

The above-mentioned titles have a couple of things in common: they feature lots of ikemen(handsome boys), and their stories go beyond training and competitions to delve into their growth as human beings. In some cases their journey of self-discovery even has a few surprises, like revealing their true sexual inclinations. Indeed, homosexuality is a theme that can be found in some of these works, particularly in Yuri!!! on Ice. Kuroko’s Basketball, on the other hand, does not feature any gay vibe, but many female dojinshi (fanzine) creators have embraced and developed this side of the story. Probably because of the greater diversification in the comic market and the changing demographic among comic fans, there seems to be much more variety at the top of the list of favourite sports manga. Overall, baseball might still be number one, but it has to contend with many other disciplines now. For example, Japanese manga webstore BookLive asked fans what titles they liked the best. 3,441 readers participated in the poll, and the results were very interesting. In particular, seven different sports made it into the top ten: baseball, tennis and basketball with two manga each, then volleyball, football, bicycle racing, and even American football – and Haikyuu!! and Kuroko’s Basketball are top of the list.

In many respects, sports manga seem to have changed quite a bit in the last 20 years, as much in the way they are created as enjoyed. What hasn’t changed though are the drama, high tension and sometimes cruel twists that make Japanese comics so different from their Western counterparts. In Hanebado! [The Badminton Play of Hanesaki Ayano] for instance, a former badminton champion trains her daughter hoping that she can follow in her footsteps, but when the girl catches a cold before an important school tournament and loses her match, she is rejected by her mother who leaves her in the care of her grand-parents. Sport and heartbreak: that will never change.