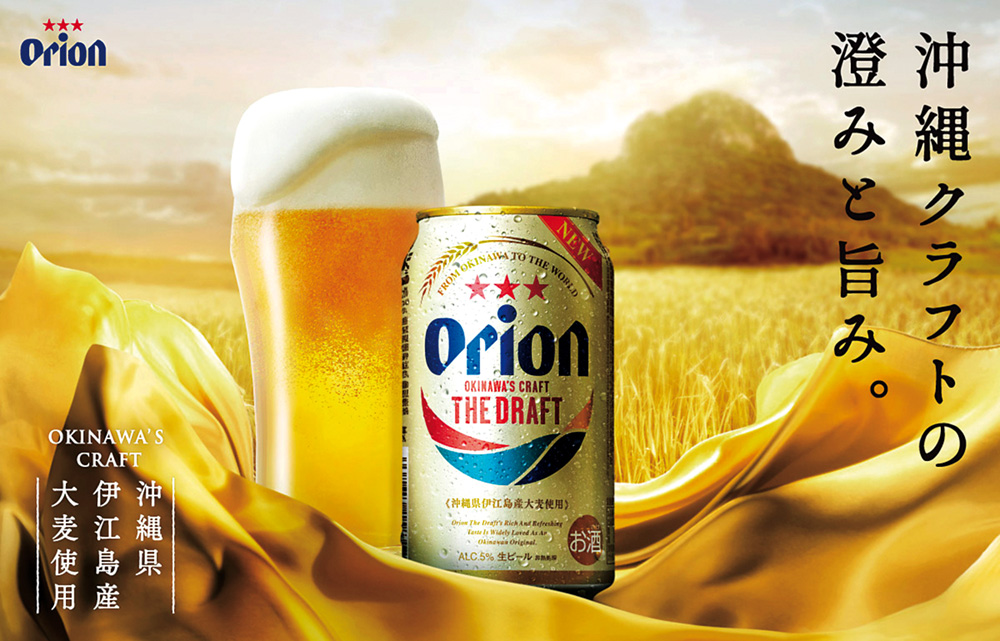 Advertisement for Orion Brewery, originally established in Okinawa, which has 0.8% of the beer market.

Representing 40% of the alcohol consumed in the country, beer remains popular, but is dependent on the economic situation.

Japan loves beer. In absolute terms, it is the seventh-largest beer consuming country in the world, despite its small size. However, in terms of per capita consumption, it is ranked 50th, with 40.1 litres of beer per person. the Japanese beer scene is dominated by four main companies – Asahi, Kirin, Sapporo and Suntory – which in 2018 accounted for more than 94% of the local market. Asahi Beer led the pack with a 37.6% share, followed by Kirin (30.3%), Sapporo (15.3%) and Suntory (10.2%). A fifth company, Okinawa-based Orion, had a 0.8% share. Products from these brands (especially the Big Four) can be found in every supermarket, convenience store and bar around the Archipelago. the Japanese beer market is divided into three categories under the Liquor tax Law: beer, happoshu and “new genre”. In order to under- stand how the market works, and how the classification system is affecting consumers’ choices, it’s important to understand the difference be- tween these three categories.

Beer-like malt beverages are divided into four categories based on malt content: 67% or higher, 50 to 67%, 25 to 50%, and less than 25%. Until 2016, a malt-based beverage was classified as beer if the weight of malt extract exceeded 67% of the fermentable ingredients. today, the cut- off limit has been lowered to 50%, which means that Japanese regulations now forbid the use of the word “beer” to describe brews containing less than 50% malt (thus allowing up to 50% added ingredients including rice, corn, sorghum, potato, starch and sugar). Another recent innovation in beer-making regulations is that a larger variety of ingredients are now al- lowed now including fruit, spices, herbs, vegetables, miso, tea, coffee and even more “exotic” things such as oysters, kelp, seaweed and dried bonito (mackerel-like fish).

The high alcohol tax, combined with the recession of the early 1990s, has contributed to an increasingly shrinking beer market as total consumption of beer has sunk from more than 70 million hectolitres in 1994 to 51 million in 2017. In addition, the consumers sudden loss of interest in beer, particularly prevalent between 1998 and 2003, was the consequence of the appearance on the market of a new alcoholic beverage, happoshu, in 1994. Having a lower malt content, happoshu was placed in a lower tax bracket, becoming immediately popular with money-strapped booze lovers. when the Japanese government raised the tax on happoshu containing 50 to 67% malt, brewers responded by further lowering the malt content of their products. today, most happoshu contains less than 25% malt, putting it in the lowest tax category of low-malt beer. 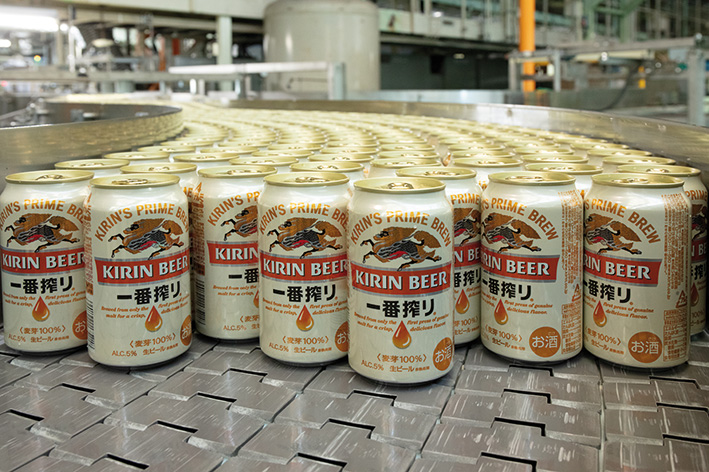 Kirin has more than 30% of the beer market.

The Japanese economy has improved over the last few years, resulting in a growth in the beverage market overall. However, the beer market has continued to contract due to a declining national population and shifting trends in alcoholic beverage sales. Younger consumers in particular are drinking less beer than previous generations. Since 2004, even happoshu has suffered from competition coming from yet another new kind of drink, so- called “new genre”: a beer-flavoured beverage that either contains malt alternatives (e.g. soybeans) or a mix of happoshu and another type of alcohol. when comparing 350 millilitres cans, tax on “new genre” brands is only 28 yen (£0.18) while even the cheapest happoshu is saddled with a tax of nearly 47 yen (£0.35). As a result, the consumption of “new genre” beers in 2017 was almost three times that of happoshu.

The 2019 consumption tax hike has contributed to the negative affect on popular attitudes towards spending, and has further strengthened the tendency to select low-priced, high-quality products. the Big Four must have lobbied like crazy to resuscitate their troubled beer production because starting from october this year the government is going to overhaul the alcohol tax system. In the next six years, tax on traditional beer will be lowered while that on “new genre” and cheaper happoshu will be bumped up until, in 2026, all three categories will be unified under a 54.25 yen (£0.4) tax.

While the mainstream beer market has gone through tough times, locally produced craft beers are gradually gaining popularity. At 1%, their market share is still small, but things are looking promising. All in all, despite the declining trend in consumption, beer (including happoshu and “new genre”) still has a 40% share of the market, making beer by far the most popular alcoholic beverage in Japan.