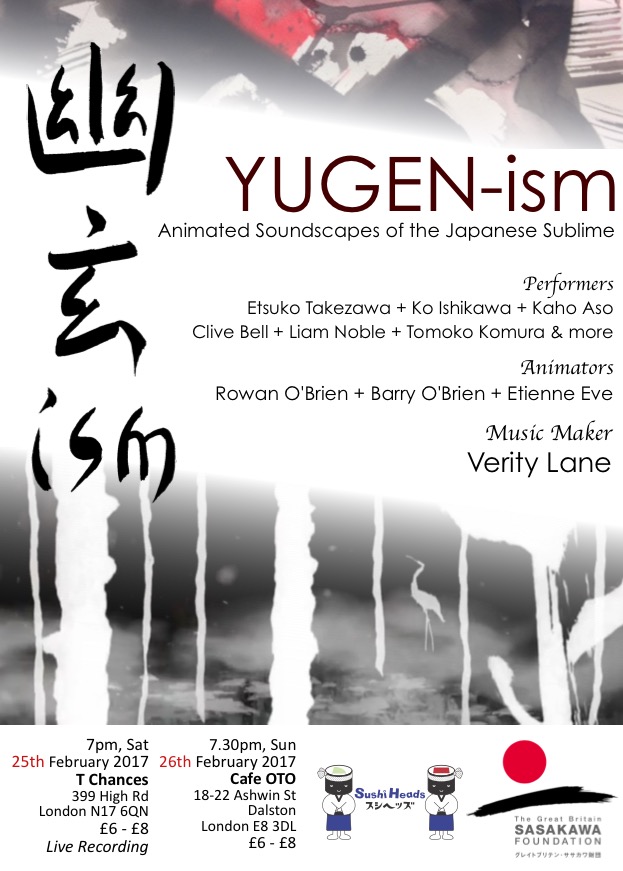 A Blend of Classical and the Avant-garde

古典とアヴァンギャルドの融合
Yugenism: Animated Soundscapes of the Japanese Sublime is the new experimental music and animation project fronted by British producer and sound artist Verity Lane. Lane has collaborated with three animators and one traditional Japanese dancer to create four sonic installations thatpresent an alternative take on classical Japanese music. With a mix of world-class British and Japanese traditional instrumentalists, this project boasts intimate live performances as well as visual artwork and spoken word.

Experience an original interpretation of yugen, and immerse yourself within the mysterious sonic landscape.

Embrace the dark and mysterious

• Derived from the Japanese term yugen.
• Yugen: a traditional Japanese aesthetic often referred to as the ‘dark and mysterious’, or simply Japanese sublime (Verity Lane’s choice of phrase). An aesthetic synonymous with Noh theatre.
• After extensive research into the term yugenism, Lane discoveredthat the late Japanese artist Kenzo Okada coined the phrase in the 20th century (after originally believing she conceived the idea first).
Yugenism: The movement as led by Verity Lane

• A progressive movement that explores new interpretations of the Japanese sublime.
• Faithful to its original roots, but updating the notion with radical creative elements.