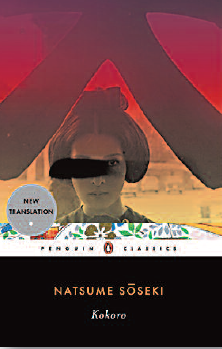 Published a century ago, Kokoro is still very popular in Japan in 2014. The Asahi Shinbun newspaper, that first published it in serial form, has started republishing this wonderful novel in the same format, choosing the same date, the 20th of April, to relaunch it. A young man is living and studying in Tokyo. While holidaying by the sea, he meets a man who will forever leave his mark on him, whom he will always call “the Master”. After travelling back to Tokyo, he is regularly invited by the Master. The young man benefits from the incredible wisdom and remarkable erudition of this man, who does not find it easy to share his experiences, and seems to studiously avoid the company of other men. One day, he finds out that the Master visits a grave once a month. He questions his elder who tells him that it is the tomb of an old university friend. The young man is intrigued, yet doesn’t succeed in finding out anything more. At the end of the academic year the young man returns home to his parents in the country. Unfortunately, his father has been ill for quite some time. One day he receives a telegram from the Master, demanding that he travel immediately to Tokyo. But the young man is not able to leave his mother given the circumstances and refuses. He explains these reasons to the old man who responds with a long letter in which he reveals the secret tragedy of his life. The young man hastily leaves his dying father behind and rushes to the station. He opens and reads the letter on the train. The novel is written with disarming simplicity. You could be reading a list of banal facts, except you’re plunged into a masterpiece of psychological complexity that reveals itself by degrees until reaching a quite unbearable finale. Its an extremely powerful novel, with a dull, insistent intensity. Natsume’s style displays incredible finesse and is amazingly precise. His story is written with humility, eschewing lyricism and unnecessary verbosity. Everything is simple and clear. His style is stripped of artifice in order to tell a complex story that reveals an old man lost in a dark abyss, who having made an unforgivable mistake, cannot live with himself or anybody else, and whose self-loathing is so great that he decides to live as though he were already dead. It’s great, it’s beautiful, it’s heart-breaking. It’s a tale of expiation, of self- punishment that lasts a lifetime. A character from a novel has rarely been so deeply moving.