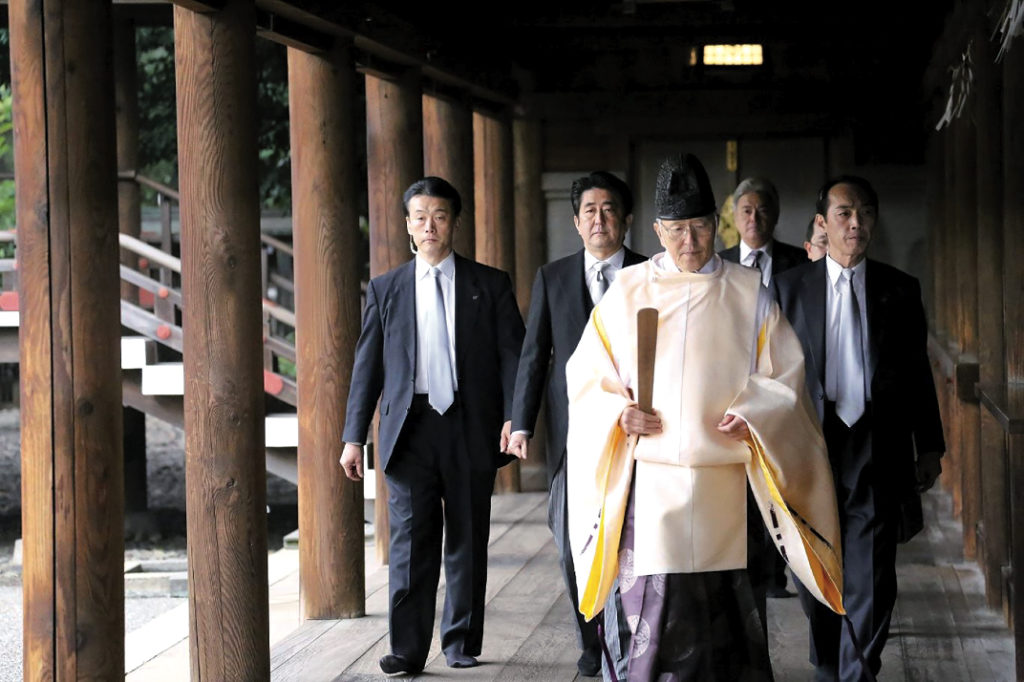 ABE Shinzo at the Yasukuni Shrine in December 2013. Nippon Kaigi relies on Shinto organizations to spread its message.

Founded 20 years ago, Nippon Kaigi has become the most influential conservative movement in the country.

According to its website, Nippon Kaigi is just “a popular movement with a country- wide network”. This is a simple, somewhat simplistic definition for this organization, which over its 20 years of existence has become one of the most influential in Japan. Translated literally, its name means “The Japan Conference”, which does not mean much in itself, but the four characters the name is composed from can make some shudder in fear. In today’s geopolitical context, with populism and nationalism becoming increasingly obvious, as illustrated by Donald Trump’s victory in the United States, the existence of Nippon Kaigi no longer appears incongruous. However, what distinguishes it from other organizations around the world that support ultra-conservative views, is its taste for discretion, although NK is by no means a secret society. Its 38,000 members, among whom number many prominent political figures, are proof of this, with 65% of present day government ministers being members of the organization. It has a well established public presence but does not seek publicity, preferring to operate by exerting influence in the back corridors of power to achieve its aims. Too much publicity about its activities would not serve the organization well, as the public might then be tempted to take an interest and start requiring it to be accountable for its actions.

However, over the last few months the four kanji that make up the group’s understated name have appeared increasingly in newspapers and magazines, and not only in those publications traditionally opposed to the current government’s policy. It seems that the media as a whole is finally taking an interest in Nippon Kaigi’s existence and its role in Japanese political life. Several books on the subject have also been published during the past year, some of which have stirred up a lot of interest. Sugano Tamotsu’s Nippon Kaigi no Kenkyu (Research into Japan Conference) has sold more than 150,000 copies since its publication in May 2016. This success caused problems for the organization when someone quoted in the book lodged a formal complaint demanding that it should be withdrawn from sale, resulting in a Tokyo Court order suspending sales on the ground that further publication of the book would “cause serious and irreparable damage” to the reputation of the individual, a former member of a religious organization closely connected to Nippon Kaigi. In his essay, Sugano Tamotsu explains that the organization encouraged some of its members to incur debt in order to buy its propaganda publications, leading some of them to commit suicide but without the organization in any way changing the way it operated. The court’s ruling has given rise to many negative reactions, and many observers felt that in a case of defamation there were other ways for justice to be served, rather than simply removing the book from the shelves. They saw this is an illustration of the power Nippon Kaigi wields and, more to the point, denounced the threat that this kind ofdecision posed for freedom of expression in the country. 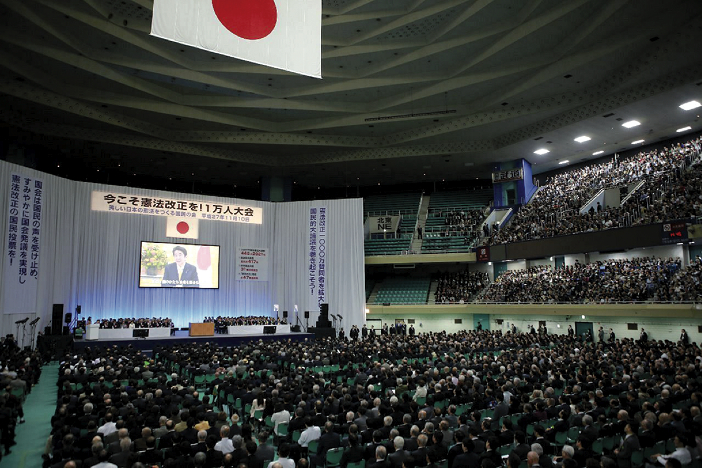 On the 10th of November 2015, Prime Minister Abe addressed the 10,000 participants at a rally organized by Nippon Kaigi in support of a constitutional revision.

The stakes are high in a country where pressure against those who do not share the conservative vision of society is increasing. Of course, Nippon Kaigi is not behind all the demonstrations rejecting diversity of thought, but it contributes greatly to encouraging the hardening of the authorities position on sensitive issues such as Japan’s history, the imperial institution, the constitution, the family, or even women’s role in society. Since its birth in 1997 as a result of the merger between the Nihon wo mamoru kai (Japan Protection Society) and the Nihon wo mamoru kokumin kaigi (Popular Conference for the Protection of Japan), Nippon Kaigi is now the largest conservative organization in the country. It is supported by a large local network, which is itself closely linked to locally established religious groups. It is thus very easy for the group to spread its ideas. In rural areas that are increasingly neglected by more traditional political structures, it has become easy for the organization to gain influence, with a strategy reminiscent of China’s Mao Zedong who used popular support from the countryside to conquer the cities. So it’s not surprising that NK has 243 branches throughout the country and few prefectures are without one. There are still no outposts in Yamagata, Shimane, Toyama, Yamanashi or Fukui, but that won’t last long as Nippon Kaigi needs to widen its network in order to obtain the greatest possible support for its different initiatives aimed at putting Japan back on the nationalist path it begun to take in the late 19th century. 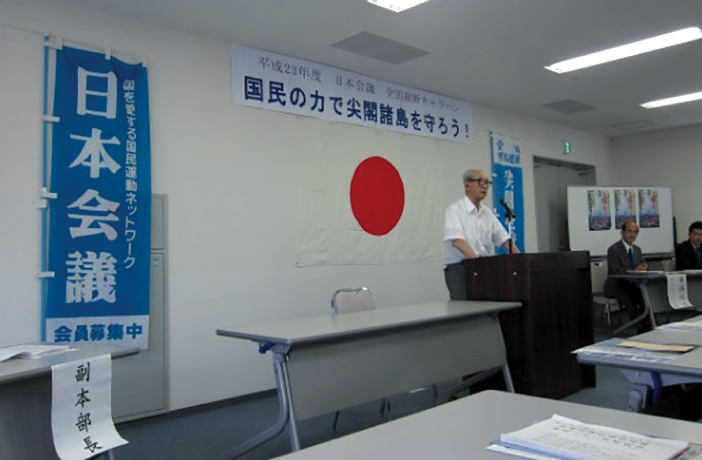 Nippon Kaigi has built up a substantial network in the provinces.

The group leave nothing to chance in achieving their goals. The lobbying is intense and NK has set up structures to get its voice heard by elected representatives, whether at national or local level. At the regional level, the federation of elected local representatives has about 1,700 Nippon Kaigi members, whereas there are 280 members among deputies and senators — 40% of all the members in the House of Representatives and the Upper House. This is certainly not enough to result in the great leap backwards that the leaders of this organization desire, but one must take into consideration that they are slowly building up power and influence which could, in the long term, disrupt Japanese democracy. They are taking advantage of the lack of interest in politics among a large part of the population, particularly in urban centres where the turnout for elections is falling more rapidly than in rural ones.

One of the main objectives is to obtain a revision of the constitution to enable Japan to rediscover a previous sense of pride. Nippon Kaigi maintains the idea that Japan has lost its way in comparison to its neighbours such as China, in order to to encourage the Japanese to embrace its desire to change the constitution. In November 2015, at the Nihon Budokan, one of the larger venues in Tokyo, it organized a gathering of more than 10,000 people to support the constitution revision project. The Prime Minister did not attend, but addressed those present by means of a recorded video message. “A constitution is an element which informs the future and the structure of a country. To this effect, let us unite to create a constitution in the spirit of welcome for a new era,” he said. That seemed to be enough to satisfy Takubo Tadae, president of Nippon Kaigi. Asked recently about his vision for Japan over the next decade, he replied bluntly that “the constitution will be revised and Japan will become a country like any other”. He seems perfectly confident in the organization’s ability to impose its views, especially considering that a future change in the head of state could usher in a character such as current minister of defence Inada Tomomi to lead the government. With close ties to Nippon Kaigi, Inada has done everything to please its leadership.

Following Prime Minister Abe’s visit to Pearl Harbour in December last year, when he stressed reconciliation with the United States in front of survivors of the Japanese attack in 1941, Minister Inada controversially chose to visit the Yasukuni shrine which honours fallen Imperial soldiers, including a number of those judged to be war criminals. As a long time member of Nippon Kaigi she believes that this is simply a way to demonstrate pride in her nation.