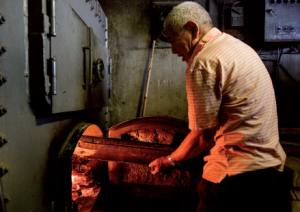 The Matsuyanagi family have been managing this establishment in Yotsuya for the past 45 years. It is growing in popularity again.

The first time I took a bath here I was told off by some of the customers. “Take it easy, you’re using too much cold water!” they said. A small, wrinkled old lady was frowning at me. Apparently She is a regular at Wakaba-yu (the hot waters of Wakaba) and always maintains her bath at 45 degrees. Situated at the bottom of a steep slope lined with temples, this sento and its mosaic of knights hasn’t changed a bit over the past 45 years. Neither have the customs. It’s late in the afternoon and a host of people in their seventies are having a scrub. The rules are strict and you need to wash before getting in the bath. They scrub themselves with an 80 x 30 cm towel, once, twice, maybe three times, take a bath, and wash their hair, scrub their feet, apply masks and then dive back into the scalding hot water. The Japanese and their love for bathing isn’t new: to wash is to get rid of the day’s worries and the first thing a Japanese wife will do for her husband for when he gets back from work is to run him a bath. Housing has become smaller, so in many modern apartments there is often just a shower, but there is still the neighborhood sento which people can go to luxuriate in. “Back in the day, beautiful young women who worked at Ginza in bars lived here. They used to come to the sento. There were many artists and people from show business, but they were rich, they didn’t come here!” tells proprietress Matsuyanagi Taeko as she sits in a tall chair her at her cash desk by the entrance to the bath house. On her left is the entrance for men, on the right is the one for women.

First you need to take your shoes off and put them in a locker that closes with a wooden key. Then pay 450 yen [£ 2.80]. “In the year 22 of the Showa era (1947), the sento cost 1 yen!” remembers her husband Ichiro. The price of Tokyo’s sento are set by the office at the town hall that also deals with disputes. However friendly the place is, disagreements do happen from time to time. “It’s usually related to the water’s temperature,” says Taeko. “Some like it a little cooler, others like it burning hot. It sometimes provokes tension!”. Apparently they had to call the police once for a fight between a Korean and a Japanese. The Korean had poured too much cold water in the bath. “Koreans only like lukewarm baths, but that’s not the usual habit here,” comments Ichiro. The old man still cuts wood every morning to heat the water. Situated behind the building, the boiler room has something unreal about it, with its old bed, shelves full of paper and cardboard, a microwave and even a flatscreen TV. At the back of the room, a staircase leads directly to the Matsuyanagi’s home and opposite this are two doors leading to the baths themselves. The bath space needs washing, disinfecting, scrubbing and filling every day with water from the well. The waters are known for their benefits against arthritis, tension and muscle pains. Open from 3pm to midnight, Wakabu-yu closes only one day per month. “We’re getting old, and none of our three sons will take over. And the town hall might decide to close the establishment in a few years to widen the street,” says Ichiro, while looking through the spy hole. As weird as this may seem, all the sento’s backrooms have one. “It’s to watch in case someone faints or starts a fight,” says the old man. Wakaba-yu is quite tolerant and accepts people with tattoos as long as they don’t cause any problems. In Japan, anti-organised crime initiatives aim to condemn both the yakuza and their signature tattoos by excluding tattooed people from public places but you can’t judge a book by its cover, so at Wakaba-yu, all men are naked and equal. Miwako and her grandmother have a laugh while bathing, with their towels placed on their heads.

They often come together despite having their own baths at home. Going to the sento is a family gathering, a special moment during which they can talk peacefully. Miwako lives in a traditional wooden house in Yotsuya with her family. “The district used to be lined with beautiful traditional houses, but many have disappeared,” she says. It is situated at the bottom of Yotsuya near the sanctuary dedicated to Oiwa, one of Japan’s most famous ghost women, and the district has recently been invaded by cranes and construction sites. The number of sento in the Japanese capital has gone down from 3,500 to 700 since 1973. This drastic drop in the space of 40 years hasn’t spared Yotsuya where only three establishments have survived out of the fourteen there used to be. Nevertheless, young women have started going to the sento as well. A production company that has recently moved into the area has also started bringing in a new clientele. Two women walk in shyly and hide their private parts with their towels. They don’t look used to sento, which are smaller and more intimate than onsen, the hot springs that many tourists visit. “Oh! This is far too hot!” says one of them, taking her foot out of the bath. The older women turn to them, some of them with a smile, others with a disdainful glare. When bathing, you can either speak or say nothing but the main principle is to respect each other. When it is crowded, you need to be careful to not splash the person behind you, to rinse the basin and the stool properly and not to leave hair and water in the changing room. Over the past three years, I have progressively become accustomed to these implicit rules. The 45 degree water has often cured me at times when I was about to develop a cold. What I like above all is to completely relax my muscles and to stay still for ten minutes after the bath. A little fan blows warm air around in the changing rooms while a television hanging on the wall broadcasts the weather forecast before the 7 o’clock news. The place is old-fashioned, with its yellow walls and old wicker stools giving it a nostalgic sixties atmosphere. A regular gets out of the bath. She’s over 80 years old but still has beautiful smooth skin and stands up straight. She puts her soap and shampoo basket down and wipes herself off with her small wet cloth. By the time she walks up to her locker, she is completely dried off and not one drop of water is left on the ground. I still don’t understand why the old ladies don’t bring a second towel to dry off. I think to myself that its part of the art of bathing in a sento and vow that I will master it one day as well.