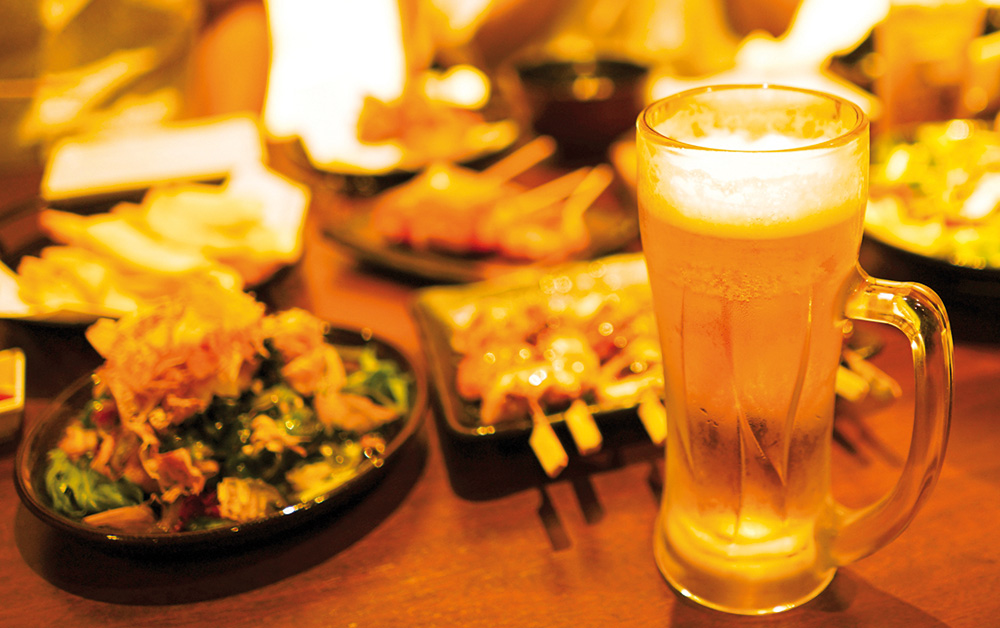 Mina-san, konnichiwa! (Hello, everyone!) It’s the season when alcohol tastes really good. The UK has pubs, Japan has “居酒屋 izakaya (traditional Japanese bar/pub)” – and I love both. This time, let’s imagine you’re going to an izakaya. You can try some phrases Japanese people use a lot, and sound really cool and like a “regular” doing so!

First up: a phrase for inviting your friend for drinks after work.

A: Ippai, nomi ni ikimasen ka.
一杯、飲みに行きませんか。
(Do you want to go for a drink?)

If you say “飲みに行く nomi ni iku (go for a drink)”, this always indicates alcohol, rather than coffee, bubble tea etc. It’s interesting that it’s the same as in English! “一杯Ippai (one glass)” at the front of the sentence gives the sentence a gentle and light nuance, but actually people who say this can often end up drinking until they have to catch the last train…. Speaking of which, Japan has this amazing system called “飲み放題 nomi-hoodai (all you can drink)”, and lots of bars known as “せん ベロsen-bero”. This means that with “千円senyen (1000 yen)” you can “ベロベロになる berobero ni naru (get sloppy drunk)”. “ちょっとchotto (a little)” + “飲む nomu (to drink)” suggests the intention just to have a “ちょい飲み choi-nomi (little drink)”, but with the cheap and delicious alcohol and “おつまみotsumami (small dishes)” piling up, people end up drinking too much and before they know it they become “ベロベロ berobero”. Be careful, drinking in Japan!

Next up: here’s a phrase you can use at an izakaya without even needing to look at the menu.

What is a “生 nama”? In an izakaya you can enjoy “ビール biiru (beer)”, obviously, as well as “日本 酒 nihon-shu (sake)”, “梅酒 ume-shu (plum wine)”, “焼酎 shoochuu (a type of Japanese spirit)”, “ワインwain (wine)” and more. But… beer is best to start off the night! …is a phrase that Japanese people often say. You can also say: “とりあえず、 ビール。Toriaezu, biiru. (I’ll start off with a beer)”. You want to order a “生ビール nama biiru (draft beer)” right? So that’s why you can say “と りあえず、生一つ！Toriaezu, nama hito-tsu!” It means you want a draft beer. The most important part of the phrase is “とりあえず toriaezu (first of all/for now)”. It sort of means “First of all, I just want to drink!” If you say this phrase, you will really sound like an izakaya regular.

Once everyone has got their beer, say “乾杯 kampai (cheers)!” in a loud voice. If you’re drinking after work, “お疲れ様 otsukare-sama (good job)!” works too.