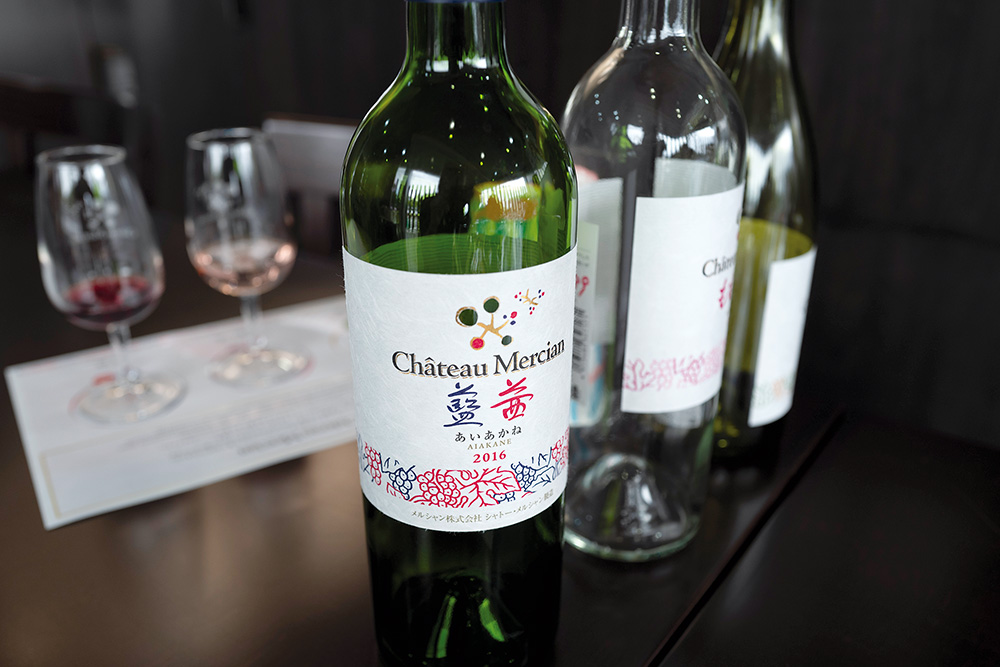 Produced in Yamanashi prefecture, this ambrosia is considered to be one of the best wines in the country.

On a clear day, when KONDO Nobuyuki is busy with his vines, he can see Mount Fuji on the horizon. In the Olympian calm of a May afternoon, he spots the first signs of growth, and touches the branches with his fingertips. The bunches of grapes will not be ready to harvest until September, so for the moment he just watches them like a pan of milk heating on the stove. He takes care of his 25 hectares of land on his own. His vineyard has been in existence since 1952, and only produces organic wine. “I only grow the Koshu grape variety, with its purple skin and from which you mostly produce white wine. I stick to the old traditional techniques, and choosing to be organic is an additional challenge,” he explains. Producing organic wine is indeed a major challenge in Japan “as the seasons of heavy rain in June and September weaken the bunches of grapes and encourage the spread of diseases. In September, when we’re getting ready to harvest and before the arrival of the first downpour, I cover each bunch by hand with a small paper umbrella,” adds the winegrower. It’s a colossal task.

Komazono is in the small commune of Koshu, in Yamanashi prefecture, the leading wine-producing region in Japan. This commune alone includes around thirty of the prefecture’s 89 vineyards. They are mainly very small-scale producers who focus on producing the best wine possible. Last winter, the all-female jury of the 6th Sakura Japan Women’s Wine Awards gave the prize for the best white wine to KONDO Nobuyuki for his Tao Koshu vintage. Komazono was in competition with numerous other wines from around the world. In his early fifties, this father of three children has been in charge of the vineyard since 2015, and is very proud of receiving this recognition. In his opinion, the key to a good wine lies in the search for one with a personality and a strong character. And according to him, Japan is quite capable today of producing excellent wine. “A woman is beautiful in whichever country she is, isn’t she? But her character and personality differ depending in which region of the world she lives,” he notes. “It’s rather similar for wine, how else can one make a comparison? Each wine has its own wealth of attributes.” Near Koshu, in Enzan, TSUCHIYA Yukari, manager of the Kizan vineyard (https://kizan.co.jp) founded 85 years ago, makes the same point. “Today, the quality of Japanese wine continues to improve. It has more strength, more taste, more character. For a long time, the image the Japanese had of wine was of a luxury product that was expensive, inevitably foreign, and only found in gourmet restaurants. That’s no longer the case – the drink has become widely available and is found in izakaya (informal bars) as well as yakitori (grilled skewered food) restaurants. It’s good quality and reasonably priced. Customers are also aware that Japanese wine goes well with local food,” she declares.

Nestling in a splendid 130-year-old stately home, the Kizan cooperative produces 40,000 bottles of wine a year, mainly made from local grapes. “We’re under a certain amount of pressure to keep improving the quality, but we’re ready to take up the challenge and there’s an increase in demand,” she explains. The couple studied microbiology and winemaking in Japan and Australia in order to be at the forefront of new production methods. Kozo, Yukari’s husband and the third generation to work at Kizan, also studied traditional French production methods. “In Japan, problems mount up. The rainy seasons come during two key stages in the vines’ growth: when they’re flowering, and then just before harvest, which encourages the spread of diseases. In addition, the soil is very acid so needs to be regularly improved, and the surface area of the vine fields is smaller than elsewhere, sometimes less than a hectare, or on slopes and accessible only with difficulty, which limits the use of machines,” he acknowledges.

To add to all that, the image of Japanese wine has always suffered from a bad reputation among consumers. “Formerly, the local population used to drink grape juice with added alcohol. It was quite dense, brown coloured, not expensive but not good, either. It was bought in large bottles and was shared by the family at mealtimes. It was drunk at different times during the day. Strictly speaking, real wine only appeared much later,” recounts TSUCHIYA. Since production methods have improved, the trend is changing. Though the share of Japanese wine barely represents 5% of what is consumed locally, experts agree that it could well reach 10% over the next decade. 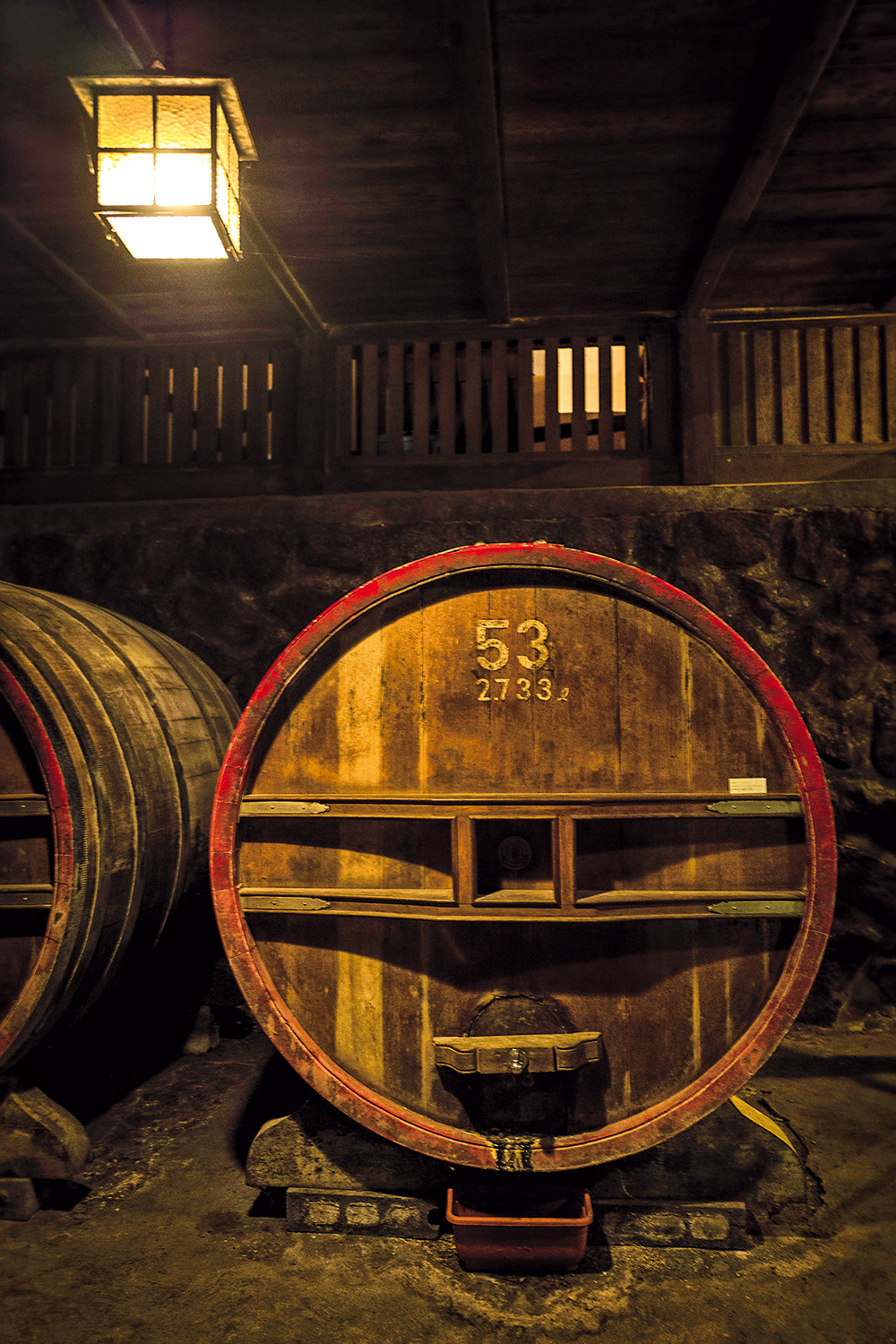 There are around thirty wine producers in the municipality of Koshu.

“The wine that was produced in Yamanashi two years ago is nothing like the wine we’re currently producing. It tastes completely different. At that time, I would never have drunk Koshu wine. Today, it’s what I prefer to drink above all,” claims OMATAMarie, a 32-year-old guide specialising in Japanese wine cultivation. After previously working in the sales departments of large companies such as Shiseido, The Japan Times and Tesla, the lovely thirty-year-old woman bravely changed direction. Passionate about the Yamanashi countryside, her region of birth where she’s always lived, she’s committed to sharing its wealth of local heritage. “Even when I worked in Tokyo, I preferred to travel nearly two hours on a train each morning and evening rather than give up living in Yamanashi,” she says. An inveterate traveller, she has journeyed around the world, visiting fifty countries on her own over a period of six months. “I have a slight preference for France, which I have visited eight times. I love discovering new cultures, and while travelling, I became aware that no one knew Japan produced wine, and I realised I wanted to promote my own region in my own way,” she adds. Today, she mainly guides winegrowers and travellers from abroad on private tours (www.facebook.com/yamanashiwinegirl). “I liaise with local producers who don’t have the time to communicate their know-how and don’t speak English.” After she’s explained it all to them, she’s noticed that “people always leave agreeably surprised because there are all kinds of good quality wines in Japan, particularly in Yamanashi. There are also organic natural wines or wines produced employing biodynamic methods. Koshu wine also has this characteristic flavour called ginjoshu, similar to sake, which makes it perfect to accompany local dishes.”

The history of Japanese wine growing really begins in 1877. At that time, TAKANO Masanori and TSUCHIYA Ryuken, employees of the first Japanese wine cooperative, the Dai-Nihon Yamanashi budoshu kaisha (Dainihon Yamanashi Wine Company) travelled to France to visit the vineyards. They spent forty-six days there and acquired some basic knowledge about wine production before returning home to start large-scale wine production in Yamanashi Prefecture. The local Koshu grape variety was chosen, which had been grown in Japan for 1,300 years, having arrived from its native Caucasia via the Silk road. The grape has a double advantage of being resistant to damage from disease, to rain and cold as well as having a fresh texture and subtle acidity. During the 1970s, the cooperative became Château Mercian, Japan’s flagship wine company today. “The new name was a reference to France, Château for the vineyards and Mercian for ‘merci’,” explains NAKAMUrA Kazuaki, the company’s wine grower. “In Japan, when we make sake for instance, we take care to thank the rice, the water, and the farmers who allow us to make the finished product. In this case, it was our way of allowing the wine industry to embrace the idea.” 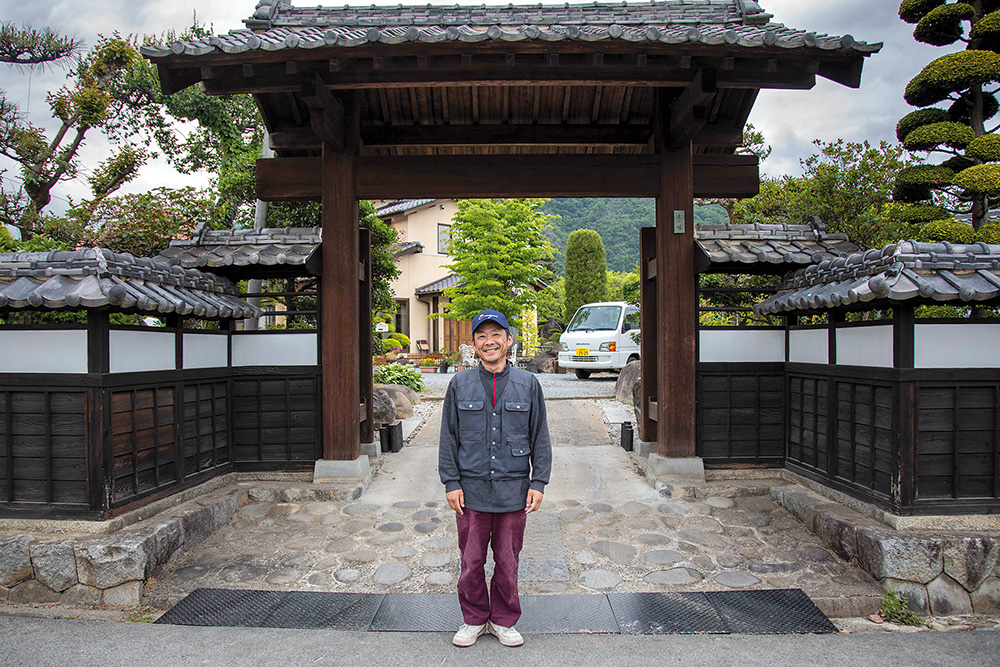 On this particular day, a dozen curious people came to visit the famous cooperative’s cellars where the first litres of Japanese wine saw the light of day just 140 years ago. Château Mercian (www.chateaumercian.com/en) grows Koshu and Muscat grapes in Yamanashi, but also the Chardonnay and Merlot varieties in Nagano prefecture. The cooperative plans to expand by opening a new winery, Mariko in Nagano, this autumn. “Without a doubt, Japanese wine is far better suited as an accompaniment to the Archipelago’s cuisine than other wines,” NAKAMURA maintains. “Koshu wine is excellent with sushi and sashimi, and the red wines go well with Japanese home-cooked food such as pork with ginger or minced beef. We’re absolutely convinced that the market for Japanese wine will continue to expand and develop.

In and around Koshu it seems that the grape, promoted to the role of a local star, determines the rhythm and pace of daily life. Miura Farm, in the village of Enzan, cultivates around two hectares of dessert grapes. It’s a hard but fulfilling life according to 47-year-old MIURA Makoto. He gets up at four in the morning every day. From May to October, he knows he cannot take a single day off. “From the moment the first bunches of grapes start to appear, I need to watch over them carefully. I grow Kyoho, Peony and Muscat grapes.” In Koshu, everyone has a connection to grapes. In 2013, MIURA settled in Yamanashi with his wife Kahoko and their daughter Akiho, aged ten. “We’re originally from Kamaishi, in Iwate prefecture in the north east of the Archipelago. After the huge earthquake in 2011, we wanted to change the way we lived. I’d had several jobs including working in an electricity company, but I’d always dreamed of becoming a farmer one day.” The earthquake and tsunami came as a com plete shock to the family, who staked everything on starting a new life. “My father owned a fishing business,” explains Kahoko. To begin with, having grown up by the sea, I found it difficult adapting to daily life in the mountains. I felt imprisoned. Then I learnt to enjoy living here and now I’m very happy.” Now they have better access to care for their handicapped daughter than when they lived in Tohoku. “We also love the white wine, Koshu wine, and we have great pleasure in introducing it to visitors passing through,” she explains. In addition to the work in the fields, the family farm offers travellers board and lodging.

“We welcome the fact that new people are coming to live here,” agrees TSUCHIYA Yukari enthusiastically. “It’s good for the local economy, and we’re delighted to see people set up an agricultural or wine-growing business. You know, there’s not really any competition between us. The demand for our wine is increasing, but production is not yet at maximum capacity, so more helping hands are always welcome!”

HOW TO GET THERE
Form SHINJUKU STATION TOKYO, take the azusa train to otsuki station on the Chuo line. The journey takes around 75 minutes. at otsuki, change to a local line in the direction of Katsunuma-budokyo (around 20 minutes). at Katsunuma-budokyo, take a taxi or catch a bus.