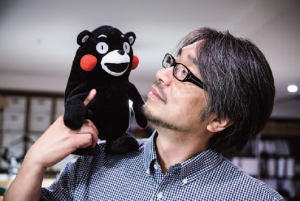 Koyama Kundo’s mission is to make people happy, a mission that he has accomplished admirably thanks to his popular mascot character.

Script and broadcast writer Koyama Kundo is a man of many talents. Since joining [***TV] when he was still in college, Koyama has written a number of hit programmes and films including the “Iron Chefs” TV series and the Academy Award-winning “Okuribito”. More recently he has played an important part in the nationwide success of Kumamon, one of the more popular yuru kyara of the last few years. Zoom Japan met Koyama at his N35 agency to talk about the chubby mascot of Kumamoto Prefecture.

Do you think you have something in common with Kumamon?

Koyama Kundo :Well, people always say I look like him. To begin with, we have a similar figure (laughs). Also, I think we both want people to be happy.

Can you tell me the circumstances in which he was born?

K. K. : Before talking about Kumamon, we have to mention the project that lead to his birth. Kumamon was born in 2010 as part of the campaign to launch the long-awaited Kyushu Shinkansen line. There was a lot of apprehension at the time. Everybody was like – what if people only pass through our prefecture on the way to Kagoshima, or local youth just use it to leave home? That’s when I was asked to organize the PR campaign, and I decided to turn it into a big festival.

So what did you do?

K. K. : I thought that just showing people outside Kumamoto what our prefecture had to offer was not enough. We people of Kumamoto had to be aware of our region’s charm. Instead of taking things for granted, everybody had to look at them with different eyes in order to understand which places had real potential to attract tourists. Tourism is often used as a magic wand with which to revitalize a region. However, we must be careful not to throw money into half-baked plans, otherwise our success will be short-lived. On the contrary, what we want is to create something that we can sustain over a long time, even after the excitement created by our campaign subsides.

So you came up with the “Kumamoto Surprise!” slogan.

K.K. : You have to surprise yourself first before you are able to show other people how good or worthwhile something is. Every citizen must become an ambassador for their region. This slogan is actually based on a particular experience I had. One day I was in Kumamoto and took a taxi. The driver – a middle-aged woman – drove off but didn’t turn the meter on. I told her, and she replied that there was a red light ahead and we were going to stop soon anyway, so she would start the meter later. That’s the kind of surprise that turns a trip into a memorable experience. And it’s the kind of asset we have to value in order to make people happy. I later learned that was common practice in Kumamoto; in Tokyo it would be unthinkable. That’s exactly what local people have to do. Look for things that for them may be obvious, but that for visitors from other prefectures are new and worthwhile.

At what point did Kumamon join the project?

K. K. : Well, Kumamon actually came out as another surprise, so to speak, for it wasn’t included in our original plan. Our art director, Good Design Company’s Mizuno Manabu, created the campaign logo and he threw in a mascot as an added bonus. One day he showed us this cuddly, loopy-faced black bear with its constant look of surprise, and it was an instant hit among local officials. At first we didn’t even plan to make a character costume, but the prefectural officials expressed this desire, so in the end we chose that path. At this point a very special thing happened, for even though the original plan belonged to the Shinkansen Planning Office, other departments jumped in and asked to use Kumamon. This level of collaboration between different departments is extremely rare in Japan, especially when public authorities are involved, so even in this respect Kumamoto is special.

So how did Kumamon become so popular?

K.K. :At first the brand promotion department convinced local nursery schools to allow Kumamon into their premises and be shown to the little children. Then they sent him to Osaka in order to test that market. His popularity gradually spread across the Kansai region and it was taken up by bloggers and Twitter users. New initiatives sprang up one after another until it was picked up by mainstream media. In the meantime, the prefectural office let businesses and manufacturers use his plump figure free of charge, and that further contributed to promote the region.

I think your marketing campaign greatly contributed to his success.

K. K. : Yes, of course. Because we wanted to test him in Osaka, which is a humour-loving city, we decided to give Kumamon a very funny, droll side. If our target had been Tokyo, for instance, we would have made him cooler or more stylish. Luckily, the people in Osaka liked him so much that his fame gradually spread to the rest of the country. Secondly, every manufacturer who applied was allowed to put Kumamon on their packaging. Now you can see him everywhere, from pastries and keychains to aircraft and purses.

And the results have proved you right. According to a recent Bank of Japan study, in just two years he has generated US$1.2 billion in economic benefits for his region, including tourism and product sales, as well as US$90 million worth of publicity.

K. K. : I was really surprised by those figures. I never thought it would be so successful. After all, I only created the conditions for his birth.

Four years have passed since Kumamon’s birth. Has your strategy changed regarding his public image?

K. K. : In the beginning we looked for ways to attract people’s attention all over Japan. Recently though, we have been focusing more on Kumamoto itself. Specifically, we want to find ways to boost people’s happiness and sense of well-being. So we have created a Department of Happiness and everybody is invited to contact Kumamon – through Facebook and Twitter – and tell him about the happy moments they have recently experienced.

What is the “Koyama magic touch” everybody seems to mention when talking about you?

K.K. : I guess I have a knack for giving new life to things other people all too often take for granted, and highlighting their hidden charm. I’m also good at making other people work (laughs). I mean, every time we start a new project, I provide the impetus – that first important push – which gets everything moving. After that, once everybody is sold on my idea, I can sit back and let them do the job (laughs).

What message do you hope people will get from Kumamon?

K. K. : Kumamon is a real yuru kyara (loose character) as he is so clumsy. Because of that, I hope people will understand that you don’t have to be perfect or extra cool in order to be happy.