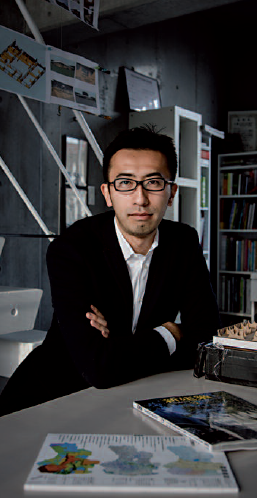 Keenly aware of the challenges facing our society, Sugawara Daisuke shares his architectural vision with us.

Has your perception of architecture changed since the earthquake on the 11th of March 2011?

Sugawara Daisuke: Far from changing the way I think, the 11th of March 2011 has convinced me that I was right. Since the financial bubble burst in the early 90s, I get the impression that architecture has been considered like some kind of game, where you can see competition on the level of form and ideas. In the world of Japanese architecture, my concept differed greatly from the norm. It was more about “creating a building to live in”, something that had nothing to do with the game the others were playing. When it concerns living space, in my opinion, it is essential for architecture to enable people, the inhabitants of this region, to live comfortably. The earthquake has not changed the way I think. On the contrary, it has given me comfort that my approach to architecture is the right one.

Among the many challenges that Japan will have to face, the ageing population is one of the biggest. How do you think architecture should respond?

S. D.: One of the difficulties in an ageing population is what is known as “the isolated elderly person”. Living far way from their families and having lost their friends, the possibility of getting out is limited, especially in the case of injury or illness; someone can die at home without anyone noticing. To overcome this problem we should design houses that fit into a local community, and I believe architecture has a role to play. During the period of strong economic growth, people developed a dislike for family and local ties, which led to building places suited to the nuclear family, shut off from the rest of society. However, now that the economy and concerns for superficial things are in retreat, all people, not only the elderly, are experiencing a kind of anxiety that compels them to seek out human contact. The development of social networks like Twitter or Facebook illustrates this further. Consequently, it is now possible to open up the house, or at least a part of it, to wider society or the community, and people, not only the elderly, will be able to build a society in which individuals are able to form connections. In the context of an ageing population, it is a great way to encourage a healthy lifestyle and create relationships between “isolated elderly folk” and the local authorities. Such an approach can be found in the master plan for the Rikuzentakata temporary housing project that I worked on.

If you compare the last few decades, does Japan’s difficult economic situation influence your work as an architect? If it does, then in what way?

S.D.: As a result of the decline in the population and the economic changes that followed, I get the impression that what is required from an architect is also changing. Until recently, success for an architect was a museum, a theatre, a library or a state commission; what was required was beautiful spaces and impressive style. Today, those kinds of buildings do not answer the needs of a country where the population is decreasing. Most of those buildings were actually built by architects who are now in their sixties. What is now required of a young architect is not large ambitious buildings, but buildings with more humble dimensions that fit into their surroundings, and represent the region and the local community they are part of. In other words, we have moved to the idea that connecting people and their environment is central to a brief. Moreover, we’ve noticed that it’s now local councils and smaller companies, rather than the state or large companies, that are offering contracts, and that they are less likely to be for large urban developments, but rather for smaller buildings, or even renovation work, in the provinces.

What kind of projects are you working on?

S. D.: Currently I am working with local developers on a residential project called “The connected House”. It is not about planning one house at a time, but thinking about the space between each of them, to plan communally shared streets and pedestrian routes. In a small town in Akita prefecture, I’m looking into renovating some old houses to turn them into a community coffee shop. The project is not limited to this one specific site, but aims to encourage social interaction by creating connections between this location and the rest of the city. I’m also in charge of creating a brand image for the project to help in its development. Lastly, in Yamanakoko in Yamanashi prefecture, a town where bus use is very high, I am designing a bus-shelter that will enhance the locality and create a connection between the travellers and their surroundings.

If you had unlimited technical and financial means, what kind of project would you like to work on?

S. D.: A declining population is not a problem specific to Japan; it concerns all industrial societies. I would like to work on designing new models for regional planning to take this phenomenon on board, so that cities can remain attractive places to live in. Since the country’s modernization and a period of strong economic growth, physical elements such as buildings and cities have increased in size. In a society based on the idea of growth, all technical skills were utilised to respond to every need, and proved very efficient once they were integrated. Nevertheless, in a society in decline, we found it was easier to modify previous ideas and to reintroduce them on a regional level. In a society where we produce more than is needed, we should focus on technology that helps produce just what is sufficient, rather than supporting mass production. This question is of great interest to me, but does not only affect Japan. It could become a working model for the rest of the world.