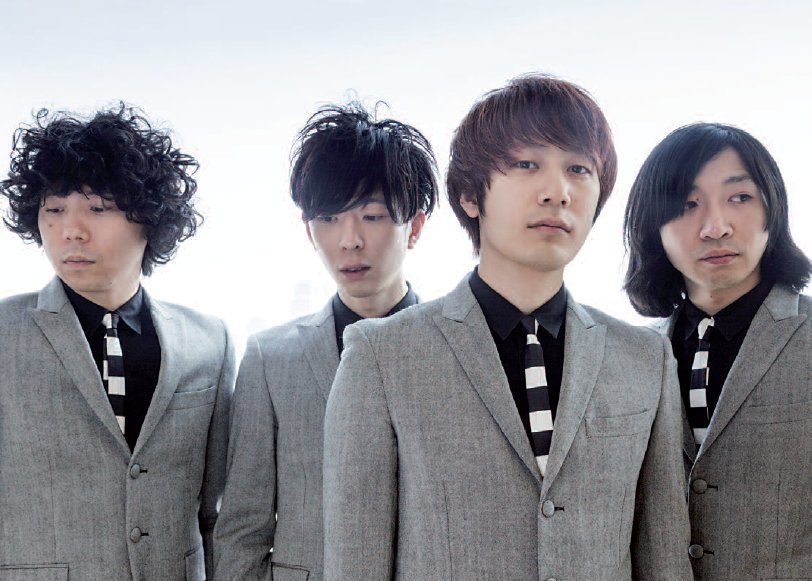 The Tokyo-based band is about to make its first attempt to win over European audiences.

Japan has a pretty good rock and R&B revivalist scene, but few bands have been as successful as The Bawdies. The stylish four-piece from Tokyo — Ryo “Roy” Watanabe (bass/vocals), Taku “Taxman” Funayama (guitar/vocals), Yoshihiko “Jim” Kimura (guitar/vocals) and Masahiko “Marcy” Yamaguchi (drums/vocals) — have made scores of fans with their infectious brand of rock and roll. We met them at the Victor JVC (their record label) office in Shibuya before they left for their first European tour.

I know you guys have known each other for a long time now. Can you tell us how you met?

Roy: Yes, Jim, Marcy and I have known each other since first grade. We attended the same school for 12 years, so you could say we have grown up together and are, in a sense, like brothers. During all those years we even played basketball together, and I believe this experience made our friendship even stronger. Taxman joined the gang only later, as we met him in high school.

How were those early years together?

Roy: We were always playing basketball. We liked music too, of course, especially bands like NOFX and Green Day, or Hi -Standard from Japan. We used to go to the Fuji Rock Festival, and in junior high school we even began to play around with guitars, but we weren’t really into it yet. Some of our friends, for example, formed their own bands, but for us it was basketball all the time.

When did music become your main passion?

Roy :When we finished high school we gave up basketball as well, but we kept looking for something through into which we could channel our energy. Then, one day, Jim and I were in a record shop when we happened to hear a song by The Sonics, an American garage band from the ‘60s we had never heard before, and it just blew us away. The idea that 50 years ago, way before punk came about, there were bands playing such violent, intense, wild music was beyond our imagination. We were instantly addicted.

And decided to form a band right away?

Roy: Well, actually, our first reaction was to spread the word about this music. We were sure that many other young kids like us, especially in Japan, would be shocked to hear these songs. The problem was we knew nothing about the Sonics. As far as we knew the band had probably broken up years ago and weren’t playing anymore. So we decided to do the next best thing, i.e.
form our own band and let people know about this music ourselves.

So you were in college at the time?

Roy: Yes, The Bawdies were officially born in 2004, but before that we spent three years rehearsing and honing our skills. I call that time our “sakoku jidai” (isolation period). For three years we never played live. We spent all the time listening to ‘50s and ‘60s rock music (Chuck Berry, Little Richard, etc.) and playing all the time, the same way the Beatles and Rolling Stones had done. More than playing simple cover versions we wanted to reach a stage where we could reproduce those songs perfectly. At that time we didn’t even think about turning pro and earning money. We were just obsessed with listening to and playing this music.

In Japan there is a substantial revivalist rock scene. How do The Bawdies differ from such bands as The Birthday and The Predators?

Roy: Most of the Japanese bands have been influenced by the British mods and other such white rock groups. In our case, though, we mostly liked black music (soul, R&B) and black rock musicians like Chuck Berry. Even now there are only a few local bands that are into these artists, but when we started we were the only ones.

I find your vocal style perfect for the kind of music you guys play. Has your voice always been like that?

Roy: No, not really (laughs). As you can see, when I talk, like now, my voice is pretty different from the way it sounds on record. I think kids around the world like to imitate their favourite singers. You can hear it every time someone sings in a karaoke. In my case I happened to like Ray Charles and Otis Reading, and during the “isolation years” I strove to sing like them, day in and day out, until I developed the kind of vocal style you can hear on CD or in concert.

In all the bands that feature two guitars there is a particular interplay going on between the guitarists. Is it the same with Jim and Taxman?

Taxman: We don’t have fixed roles. It depends on each song. Sometimes I play the lead, sometimes Jim does it. In any case our goal is to come up each time with the best arrangement and the best musical solution.

How would you describe Jim’s style?

Taxman: In a sense he embodies the spirit of the band. Even in concert he is the one who moves around the most on stage. He has a definite garage style.

Jim: Taxman is an extremely gifted guitarist, he’s really good. But his best quality consists in hiding his skills and making it sound simple. He’s not a show off, but always puts his skills at the service of the band.

Taxman, what about your “Bob Dylan connection”?

Taxman: Haha! Well, I have naturally curly hair, which is quite unusual in Japan. Over the years I tried different hairstyles and eventually decided to do it like Bob Dylan who is one of my heroes. I like Jimi Hendrix too and one day, while reading a book about Jimi, I found out that he too had styled his hair after Dylan whom he admired very much. That’s when I realized
there was a deep connection between Jimi, Bob and myself (everybody laughs).

Marcy, you seem to be very quiet and in some respects remind me of the role Ringo Starr played with the Beatles. Do you agree?

Marcy: It’s true that by nature I don’t like to be in the spotlight and rather enjoy staying being in the backround. The same thing applies to the band. Being the drummer allows me to contribute to our sound without having to step forward. That’s a role I gladly leave to the other three guys. Then, of course, I have a closer relationship with Roy because we are the rhythm section, so there’s this interplay going on between the two of us.

Speaking of the chemistry between the band, was everybody’s role already established from the start?

Roy: From the beginning, back in junior high, Jim expressed an interest in playing the guitar. As for me, I was into singing more than anything else, but because at the time it was only the three of us I had to play an instrument anyway and I chose the bass.

So Marcy had no choice but to play the drums.

Marcy: In other words, I didn’t choose the drums. I don’t even like them that much. They were imposed on me (everybody laughs). All in all they suit me well, as I said, because they allow me to stay in the background, so I can’t really complain.

Since your debut album in 2006 you have released eight records. How do you think your sound has changed through all these years?

Roy: As I said, in the beginning it was all about getting as close as possible to the music we loved. That influence is still there but I believe we have been able to slowly develop our own sound and create our own brand of rock and roll. Even my voice — there was a time when I consciously wanted to sing like Ray Charles or Sam Cooke depending on the song — but I have assimilated all these influences to such an extent that I can finally be only myself.

This is your first European tour, but you have already played abroad before, haven’t you?

Roy: Yes, we have been to Korea, Taiwan, Hong Kong and Australia.

How was your Australian tour?

Roy: We have been there twice. The first time, in 2007, we knew a Japanese punk band, Mach Pelican, who were based in Melbourne. They knew the local scene very well and used to help every Japanese indie band who toured that country. Australia
also had a hot garage scene so we thought they would welcome our brand of rock and roll. Then one year later we were invited to the Queenscliff Music Festival.

How does it feel to play in front of different audiences?

Roy: People in Asia are more like our Japanese fans. It’s just that they don’t know us as well, so playing there takes us back to when we started in Japan. Kids in Australia just love to have fun. They are very open and have absolutely no prejudices. Rock music is part of their culture and daily lives, and you can feel it. They are very spontaneous in their approach to music. Hopefully, we’ll be able to get the same kind of feedback in Europe.