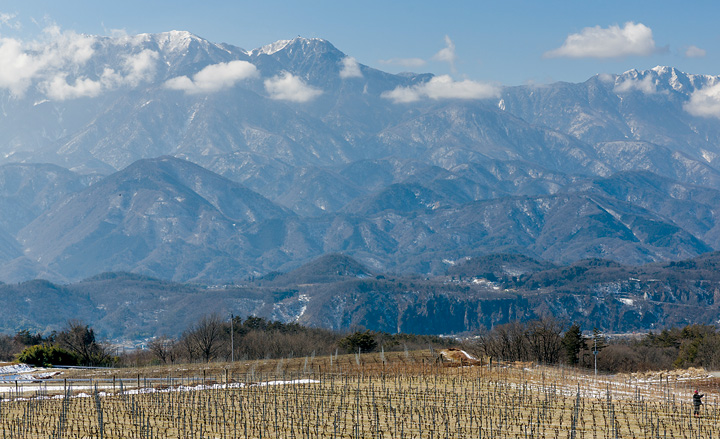 In a region deep in crisis, winemaking has proved to be the best way to escape the current rural decline.

I wanted to prove that both my father and grandfather were right,” says Misawa Ayana in a calm yet determined voice. She pauses before adding that, “Koshu is a grape variety that is found nowhere else, with which I grew up. I believe that the result we have achieved is just the beginning”. She smiles, her eyes open wide, happy to be talking about the wine she cherishes like her own child. The story of Japanese wine is the story of small family enterprises, especially of those producers in the Yamanashi region who first had the idea of taking up wine production. The dream goes back to the end of the 19th century, from the time winemaking took root across the country. Misawa Chotaro, a forebear of Ayana’s family, was one of the ambitious pioneers. He created his wine making company in 1923, although at first this brave and challenging initiative was met with complete lack of interest from customers. He quickly had to face up to competition from other alcoholic drinks and, above all, solve the problem of a disparity in quality compared to the wines imported from Europe. Nevertheless, Japanese winegrowers, including Misawa, have never given up, despite the reservations of foreign wine experts for many of whom whom, “Japanese wine tasted rather like a rice based product”. The winegrowers continued to study foreign production methods in detail, some of them even travelling to Europe.

Gradually, the domestic market improved as the Japanese became ever more westernized and started to appreciate wine. By the end of the 90s the Japanese were drinking around 3 billion litres of wine per year, three times more than in the previous decade. As a pioneering figure in the sector, Misawa Chotaro’s company in Mishima experienced these changes over almost a century. Renamed Grace Winery, it remained in Yamanashi, a region surrounded by mountains and that benefitted from conditions favourable to wine production, such as longer, sunnier days and a dry climate. The local producers concentrate on promoting the koshu grape, a red grape named after the region’s old title that first appeared in Japan during the 12th century. The wine producers modified traditional winemaking techniques as this grape’s sugar content was lower than in European varieties such as cabernet sauvignon. This has been a difficult and lengthy process started by Ayana’s father nearly twenty-five years ago, and taken over by Ayana herself in 2005, after studying wine for three years in Bordeaux. She has an unwavering certainty in the potential of the koshu grape, which was shown to contain genes from European varieties in an analysis carried out in 2004. Her efforts started to bear fruit in 2012 when she created the Misawa Akeno Koshu 2013 Cuvee, with which she won the gold medal at the prestigious Decanter World Wine Awards competition held in Britain. This was a a historic event because an Asian wine producer has never been awarded this honour before. It is also a milestone for the Misawa family, as well as for the wine industry in that region, which includes over 80 specialist companies that are attempting to compete with Grace Winery. “Over the past ten years we have seen a huge progress in the quality of Japanese wine,” says Lionel Beccat, a French chef who works in a Michelin starred hotel in Tokyo. “It’s now a proven fact that Japan produces good wines,” claims this knowledgeable cook who visits the Yamanashi region once a year. In the wake of the international success of some local wine producers, the media is hype is on the increase. The fact that Japanese winegrowers are producing quality wines from 100% Japanese grape varieties, all bound up with lengthy family sagas, makes for quite a story.

This has given rise to wine-tasting tours throughout the region, which are, in turn, encouraging tourism. The distant dream of those 19th century wine producers has become a reality. There is great interest in the the contribution Japanese wines could make in the regenerating of a region suffocating due to an ageing population and the migration of its young people to Tokyo. The statistics are shocking: the average age of the population is 45 years old, and that population has decreased by over 50,000 in the past 15 years. At least 70 primary schools have had to close over the past 30 years. Some residents laugh about it with a hint of bitterness: “There is no reason for us to be worried about a flu epidemic. There aren’t enough children here to catch it from!” says one. Others have started to take pictures of the area, as if to immortalize it before it disappears completely. Many are asking what the future holds for this mountainous region that is so proud of its medieval samurai leader Takeda Shingen. In this difficult situation, the wine industry, with its commercial and tourist potential, appears to be the solution they have been looking for. Most of the wine producers are very ambitious and the Koshu of Japan (KOJ) project was launched in 2009, supported by the prefectural authorities and the Ministry of Industry and with the goal of conquering the international market. The idea is to export this wine alongside Japanese cuisine, which gained Unesco World Heritage status in 2013. They want this elegant dry white wine with citrus overtones, which according to Lionel Beccat “goes very well with sea food”, to become the perfect accompaniment for a Japanese meal. In February a delegation of Japan’s wine promoters travelled to London, a strategic destination where contacts have already been made. However, at this stage the Japanese wine industry still can’t compare to those in other countries. Japan only has 200 winegrowers, and the Japanese only drink ten litres of wine each per year, five times less than the French. In addition, the competition with good quality and cheaper foreign wines is tough. In the hope of helping this young industry grow, the prefecture is trying to increase the number of wine producers by handing out subsidies. The situation is promising and the Ministry of Agriculture is counting on a large growth in wine consumption over the next ten years. The winemakers’ optimism wasn’t shaken by the signing of the Trans-Pacific Partnership (TPP) agreement, although it abolishes all customs duty on imported wines. “If we can withstand international competition, we will be able to demonstrate the quality of our wines once again. We need to continue to improve the quality of our products,” states Misawa Ayana proudly.