Welcome once again to the fascinating world of the Japanese language.

In this issue, let’s take a look at some notable phrases using the words “Gogatsu” or “Satsuki” that both refer to the month of May and are written with the same Chinese characters “五月”.
“Gogatsu” is the modern word, but “Satsuki” was the name for the fifth month under the old Lunar calendar. Hopefully these phrases will give you an image of the traditional atmosphere during the month of May in Japan. 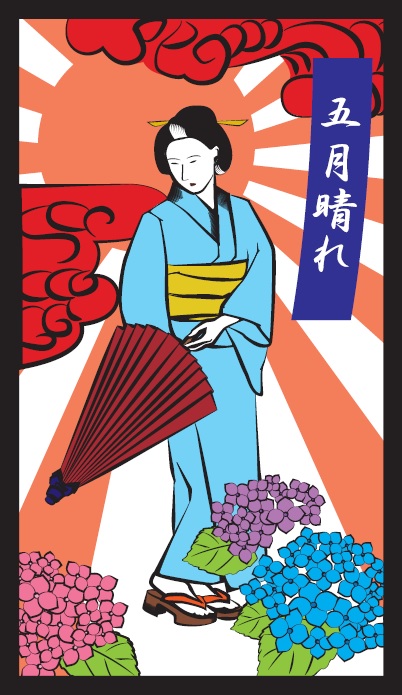 Satsuki-bare (五月晴れ, Lit: “May sunshine“)
In the old calendar, the fifth month of Satsuki fell from June to early July. This period of time is the rainy season in Japan, so the actual meaning of ‘Satsuki bare’ is sunny weather during usually rainy days.
Seeing a patch of blue sky after a long period of clouds is a beautiful thing.

Satsuki-fuji (五月富士, Lit: “Mt. Fuji in May”)
This expression has a similar nuance to Satsuki-bare above.
During the rainy season, clouds will obscure Mt. Fuji, so it can be difficult to see the whole of the mountain, but when the weather permits, the view in this season can be magnificent.

Samidare-shiki (五月雨式 Lit “like the rains in May”)
Samidare (also pronounced: “Satsuki-ame”), refers to the rains in the fifth month of the old calendar), which were heavy and often intermittent, so it is a synonym for continuous or intermittent rain. Therefore, Samidare-shiki uses this image metaphorically to mean repeatedly or intermittent in other contexts as well.
For example you can use this word to refer to a phenomenon or event in business or the news that occurs continually.

Gogatsu-byou (五月病 Lit: “May sickness”)
This is a commonly used colloquial term in Japan.
Because of how the academic and business year is structured there, many Japanese people start the next step in their lives–such as a new school or joining a new workplace–in April. However, after the golden week holiday in May is over, many will lose their enthusiasm for their new circumstances or find their health in a poor state from the stress of the change. This phenomenon is referred to as “Gogatsu-byou” or “May sickness”.

No26 [Language] Omoshiroi yo NIHONGO!