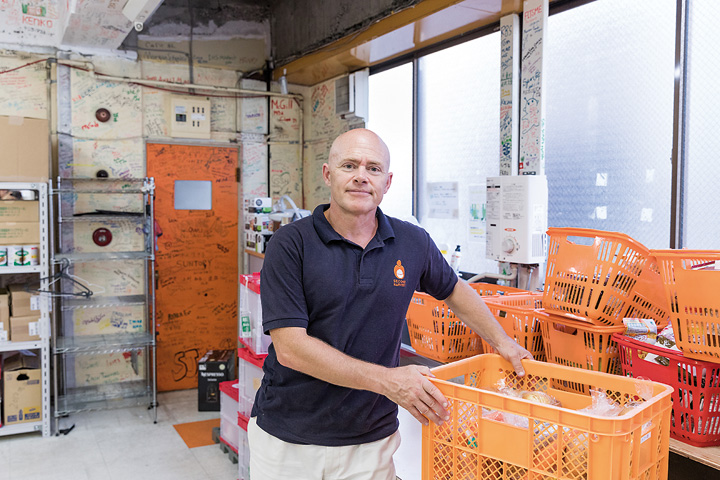 Charles mcJilton is critical of the “village mentality” of the Japanese.

Founder and CEO of Second Harvest, Charles mcJilton is frustrated when encountering the reality of the situation.

In two-speed Japanese society, where the privileged few get richer while the poor are struggling every day, two concurrent statistics stand out: firstly, Japan’s self-sufficiency rate is 39%, and secondly, 17.8 million tons of food are destroyed every year.
For many years, there was no food safety-net in Japan until, in 2000, a loose coalition of groups based in San’ya (Tokyo’s notorious neighbourhood where there are many homeless and unskilled daylabourers), created what would become Second Harvest Japan (SHJ), a non-profit organisation (NPO) that is devoted to recuperating surplus food and distributing it to those in need. In March 2002, SHJ became the first food bank in Japan. American-born Charles McJilton, now the NPO’s Executive Director, is one of the people who’s been with SHJ since the early days. Zoom met McJilton to talk about SHJ’s activities and Japan’s current poverty crisis.

Can you give me some figures? Charles mcJilton : We started very small (in 2008, we still had only three members of staff), but now we have 26, and about 110 volunteers a week. Last year, our volunteers donated 33,000 hours to us, which is amazing. More than 1,350 companies have signed agreements with us, and last year we delivered four million meals.

Where does your money come from? C. m. : 75% of our funding comes from corporations. Another 15% comes from foundations, religious organisations and schools. The last 10% comes from individuals. Nothing comes from the government. We have accepted it in the past for a few projects, but it’s very difficult to put into use. One of the problems is that you have to bear the cost of the project upfront for nine to twelve months. Only after the project is finished can you get the money back, but it’s the government that decides how much you get.

How do you get food to those in need? C. m. : We have a central kitchen that cooks and distributes the food outdoors (e.g. in Ueno Park). Then there are food banks, which provide wholesale delivery of food to welfare institutions, NPOs, faith-based organisations, and community groups. The Harvest Kitchen, on the other hand, provides perishable and non-perishable food directly to households. People can come to one of our four warehouses between 14:00 and 16:00 and pick up food from us, or we send them food in a box. Finally, we have a truck fitted out as a mobile kitchen. We have a public parking space, and people can collect the food from us there. The problem with Tokyo is that there are not enough pick-up points compared to other major metropolitan areas. Even without considering New York City, where there are 1,100 pickup points, you only have to go to nearby Hong Kong to find 160 places from where people can collect food. In Tokyo, right now, there are only about ten.

Of course SHJ is open to everybody including foreigners (e.g. refugees). I guess the number of foreigners who get food from you has increased lately? C. m. : Yes, we have helped people from 65 countries in the last three years. Even the number of Japanese who come to us has increased, which is also good. Don’t get me wrong, I know it sounds weird to say I’m happy to see more people coming because it sounds as though I see them as customers. Even when I say to someone, I hope to see you again, actually, as a food bank I do not want to see them again. What I mean to say is that I respect them and they will always be welcome here. So if you do need to come, please come back any time.

How much food do people get per month? C. m. : 12-15 kilos, which is enough for about 32 meals. You’ll get both perishable and imperishable food.

Do you have a screening system? C. m. : The first time you ask for assistance, we don’t ask for any documents. If you need assistance after that, we ask you to come with a letter of introduction. There are currently around 120 agencies that can provide that. We’ll have a look at your ID and direct you to the nearest agency. After we’ve done that, you can get food from us once a month, usually up to six times a year. In particular cases, people like refugees waiting to go to a third country, and who have no means to work or earn money, can get food every month as long as they need it. We had to introduce this system a few years ago because we noticed there were people from a certain country who seemed to come down here just to go shopping. Of course, we’re happy to give away food, but ideally we want to give it to people who truly need it.

In 2013, you commissioned a study on poverty, which concluded that the actual poverty rate in Japan is much lower when other factors are taken into consideration. What factors are you talking about? C. m. : At the time, the government had just released OECD stats according to which Japan’s poverty rate was around 15%, but I wasn’t sure this information was really correct because, infact, some of the social issues commonly associated with poverty don’t occur here. For example, we don’t have a lot of homeless people. Nationally, we’ve seen the number of homeless people drop by more than 50% in the last 5 years, from 15,000 to 6,200. Moreover, the demographics of those who live on the streets is quite narrow: 98% men, average age 55, and 60% former daylabourers. So you do not see “replacement” homeless people. Also, both our unemployment and crime rates are low. We don’t have a high demand for our services even though we have a very low threshold for applying for our services. Why’s that? A company we do business with offered to look into this issue for us and came up with some interesting information. I’ll give you a couple of examples: firstly, average savings are £190,000 per household, and secondly, the poverty rate of single parents is quite high – 50% – but many of them are living with their family. In other words, as single parents their income is low, but their overall situation is not as bad as others. So I’ve reached the conclusion that the actual poverty rate in Japan is between 10 – 12%. That should be more realistic. 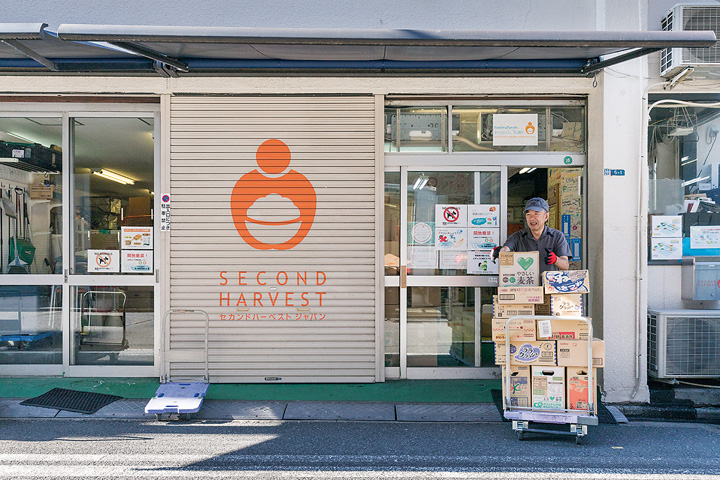 you seem to have the same opinion about child poverty. C. m. : Well, at the end of June, the Ministry of Health, Labour and Welfare reported that child poverty in Japan had dropped for the first time in 12 years (according to data gathered in 2015). It’s true that Japan is still the worst country among OECD members but, in my opinion, child poverty is exaggerated in Japan, probably because children are our future and we tend to focus on them.

The Nippon Foundation doesn’t seem to agree with you. Last September they published a book called Child Poverty may Destroy Japan. C. m. : Ha ha! They’re a bunch of academics. Next time you see them, ask them how many people they’ve actually talked to! And why they haven’t contacted SHJ. Because they know about us; they know we have food to give away, so why don’t they come knocking on our door and suggest teaming up with us? The problem is that Japan is affected by what they call mura shakai, i.e. “village mentality”. Take, for example, socalled children’s cafes. They say there are 400 such cafes currently around Japan. Everybody says it’s a wonderful thing, and I agree with that. But they’re only open once a month; once a week at the most. Why don’t they do it more often? What’s the use of opening a children’s cafe if you are only open once in a while? This is the difference between talking about a problem and actually doing something to solve it. It’s nonsense. Now I’m going to tell you a true story. A man from Adachi Ward (the poorest of Tokyo’s 23 central wards) came here some time ago to see how we worked, and he said they had a breakfast programme. I said, “That’s great! How many times a week do you do it?” And he replied, “We do it ten times a year”. Only ten times a year?! So I asked why they didn’t do it more often. “You don’t know where to get the food? No problem, we can provide the food”. And he said, “Eh, muzukashii”, which means “It’s difficult (to plan all that)”. They’ve so many hungry children who are in need, but still he seems to be content with feeding them only ten times a year. But I’m obstinate and understand the way the Japanese work so I said, “Okay, why don’t you gather all the people involved (the teachers, the students, etc.) and have a meeting with my staff?”. Eventually they agreed to schedule a meeting… just to cancel it a while later when they realised we really meant it. Because again, they have this village mentality, and people don’t want to work with other people. A lot of people involved are not paid professionals. They just want to feel they’re doing something good, regardless of the results, but they don’t accept any kind of constructive criticism. That’s why, in Japan, you don’t get this kind of frank discussion.

Japan’s nonprofit sector is smaller and less advanced than in countries like the Philippines or India when measured by the number of paid professionals, the influence on public policy, and acceptance by the general public. Why do you think that fewer than 30% of Japanese people say they trust NPOs? C. m. : Many Japanese don’t see why social welfare should be taken care of by either the government or corporations. Secondly, ordinary people don’t normally have an opportunity to engage with a nonprofit organisation, so they don’t know how they work. And lastly, people here don’t have the same sense of collaboration that we see in other countries. You can see it even among NPOs, as I said before. They all seem to miss the big picture. People sometimes say to me, “Hey Charles, just giving food to people doesn’t really change the situation”. And my answer is, “You’re right, you’re 100% correct. But what we’re doing here is fulfilling a basic human need”.