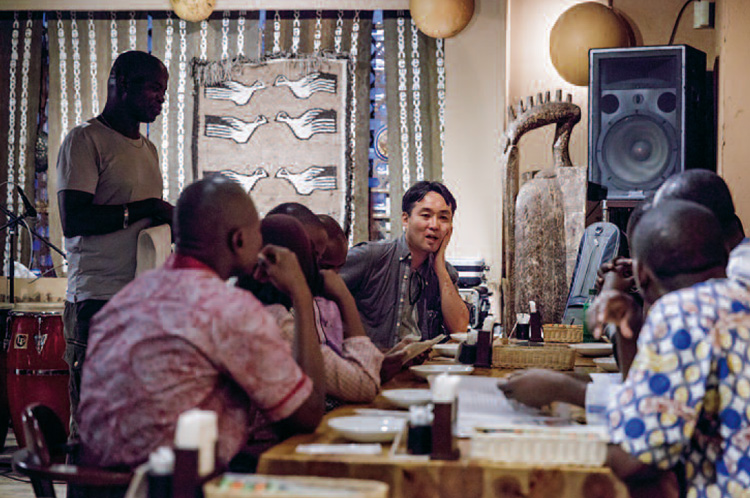 140 square meters where you can eat, drink and recall Africa to mind in all its diversity.

Calabash is one of those rare places that beats to the African rhythm of life, thanks to its founder Kumazawa Fusahiro.

every evening, you’ll find Kumazawa Fusahiro seated behind the counter at Calabash. Situated in the heart of the business district of Hamamatsucho, in Tokyo, this basement restaurant measuring 140 square metres offers you a complete change of scenery: office workers in suits sit on simple stools, while savouring plantains from the Ivory Coast and listening to music in Lingala (a Bantu language). Around them, Dogon deities and Bogolon fabrics are lit up by the light from shaded lamps made from dried calabash (gourds), from which this venue, a veritable African oasis in the middle of the Tokyo jungle, derives its name. The menu is on a par with any African restaurant in the Chateau Rouge district in Paris. Mafe (peanut sauce) from Mali, egos (pistachio sauce) from Nigeria, Senelgalese tiboudien (rice and fish), manioc fufu (mash), crocodile kebabs, all washed down with South African Cabernet or Guerrouane from Morocco. “The Japanese tend to think of Africa as just one country, when it’s actually 53 separate nation states with many different cuisines, languages and cultures!” Kumazawa Fusahiro is fond of telling you. In the kitchen, which is open to view, chef Amadou Emile can be seen working. “He’s been my Burkinan cook for ten years. He was introduced to me by the Ambassador of Burkina Faso, for whom he worked previously. He’s one of the few Africans to have studied at a French cookery school,” explains Kumazawa Fusahiro, looking at him fondly. “He’s not a Muslim, but it seems he has three or four wives in different countries, lucky man!” he whispers. Though Kumazawa Fusahiro opened Calabash eleven years ago in order to introduce African cuisine to Tokyo, this wasn’t the only reason. “I wanted to create a cultural venue to present African art, music and cinema,” he explains. A short man, with a moustache and deep-set eyes, he was born in 1946. He doesn’t have the build of an adventurer, however, he had already travelled through half of Africa by car years before the first Paris- Dakar rally in 1978. “In 1971, I left Japan in a small Nissan to travel the world. I went to Thailand, but soon found my journey brought to a halt by the Kashmir conflict. I abandoned the Silk Road and took the car to London.” Kumazawa Fusahiro smiles at the thought of these memories of his youth. “I didn’t have a penny to my name, and made a bit of money in Finland with some casual work. Finally, after two and a half years I arrived in Gibraltar.” From there, he started out on his journey to Africa, which sealed his future. “I arrived in Tamanrasset in southern Algeria, and loaded up my car with petrol cans to take the “road” as far as Agadez, in Niger.” It was a desert trek of over 1,000 km. “It’s true! There were no petrol stations on the way!” he laughs rather awkwardly. In the middle of July, he crossed the Sahara then the Sahel in a Nissan in sweltering heat, before reaching Zaire. “From there, DISCOVERY a taste of africa in Tokyo Calabash is one of those rare places that beats to the African rhythm of life, thanks to its founder Kumazawa Fusahiro. I did my best to get to Cape Town in South Africa to travel by boat to Latin America to continue my world tour. But I never got a visa. It was at the height of apartheid, and a lone Japanese person like me was not welcome. Since that time, I’ve never liked South Africa.” He finally stopped for a while in Kenya and met up with another Japanese person who was travelling around Africa in a van. “We got together to create African 100. It was a simple idea, but a bold one at that period: to drive Japanese people from London to Nairobi in 100 days! After three years of roaming around, I returned to Japan to launch the project and find people to take part! Thanks to press coverage, we had 130 enquiries in a month! It’s completely unthinkable these days, but at the time, there was a real demand for those kinds of trips,” he recalls. A dozen hand-picked participants found themselves speedily transported to Africa, where they ended up squabbling. “All went well from Spain as far as Algeria, and everything was calm and peaceful. But once we reached the Sahara, it all fell apart!”

Kumazawa Fusahiro stops a moment to laugh heartily at the memory of this nightmarish journey. Still an inexperienced guide, he discovered for the first time the capricious nature of tourists in challenging circumstances. “In the middle of the desert, some of them were demanding cheese or jam for breakfast! In the end, I had to show them the receipts for the food, because they thought I was hiding the supplies! All this started to upset even those who were quite happy with how the journey was going. The Japanese are usually quite calm, but it’s a different matter when they’re clients,” he says. Finally, the group split up in Bagui, in the Central African Republic. On his return to Japan, Kumazawa Fusahiro tried running a safari lodge he’d bought in Kenya, but it didn’t work out. “I needed another window of opportunity, so in 1979, I decided to start up a Dososhin travel agency, which literally means ‘guardian spirit of travellers’. It was the first travel agency to concentrate solely on Africa”. To begin with, Kumazawa Fusahiro offered tours to the most popular destinations such as Kenya or Morocco. Then, little by little, he turned his sights on West Africa. “I organised tours that were more about the cultural aspects of the different tribes, which completely changed the character of safaris”. In Japan, there was a boom in tourism abroad during the 1980s and 1990s, which helped the newly launched agency in its promotion of new tours. “The Paris-Dakar rally, in which Japanese drivers took part, was a new challenge and proved a great success. I took advantage of it to organise expeditions to the Téneré Desert in Niger, and to the Algerian Sahara”.

The Sahara was witness to his firsts steps in Africa, and has always remained a favourite destination for Kumazawa Fusahiro. However, the security situation in Africa has become evermore problematic. “At the beginning, clients were only worried about the toilets and hygiene, but with terrorism, it’s a completely different matter”. In 2009, he quit Dososhin and passed the reins to someone younger. “In fact, I was getting bored. There was too much paperwork and a lack of a spirit of adventure in the team. As for the clients, they’d become older and older. Hard to believe that it’s only retired people who dare travel to Africa now!” Nostalgic for a era when anything was possible, Kumazawa Fusahiro has conceived the idea of a tourist company with activities complimentary to what happens at Calabash. “I’d like to organise culinary tours to Africa, offering meals in the homes of local inhabitants, which would let Japanese visitors become immersed in the culture and appreciate the people’s fantastic hospitality. I think we’ve lots to learn from this continent,” he assures us. In the meantime, he organises cultural demonstrations with the African diaspora in Japan. In the room, all eyes are riveted on a band that’s started to play a Congolese rumba. Half the musicians are from Kinsasha, the rest are Japanese. The clients clap their hands, and a whole table of office workers start to dance, led on by an African delegation visiting Tokyo for a congress. There’s a hint of a smile on Kumazawa Fusahiro’s face. Calabash is still the only place in the capital where you feel you’re really… in Africa.

No40 [Focus]The design of everyday objects

No36 [Discovery] Aoshima has stopped purring