As one of the foremost observers of contemporary culture, Kawamoto Saburo shares his views of turbulent Shinjuku. 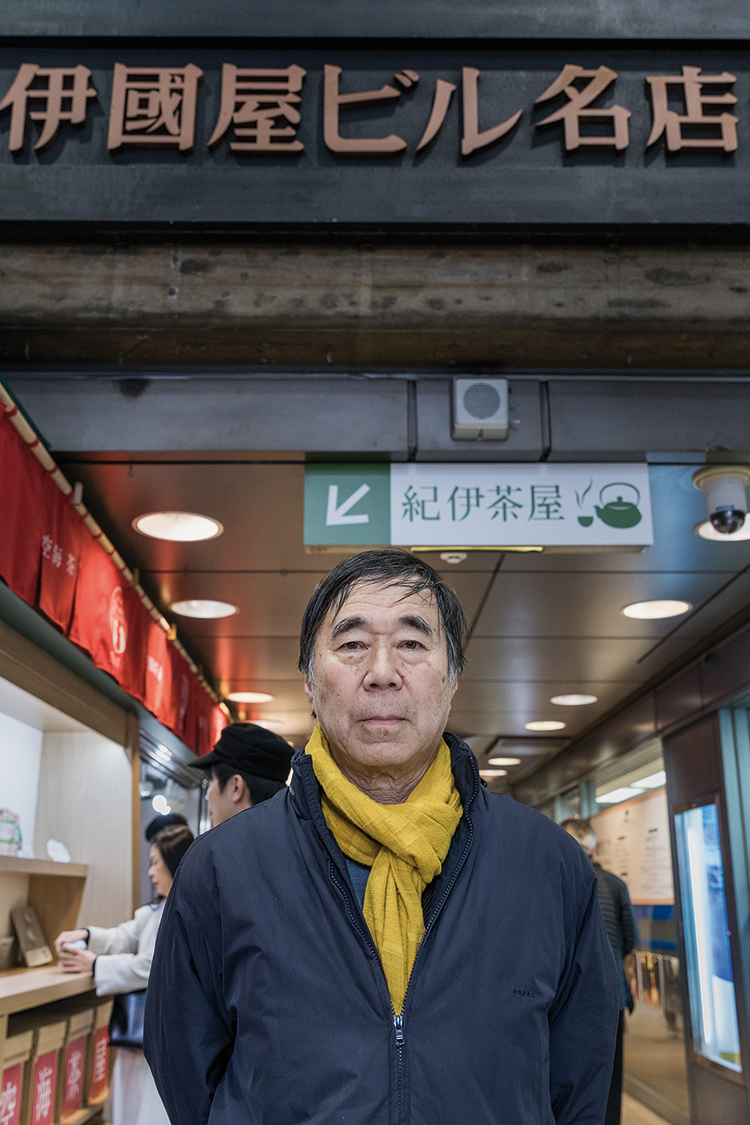 Kawamoto Saburo at the main entrance of the famous bookshop Kinokuniya.

Kawamoto Saburo is well known in Japan as a film and literary critic and a manga connoisseur, but his very first job, back in 1969, was as a magazine reporter. Writing for Shukan Asahi, the Asahi newspaper’s weekly edition, Kawamoto was on the front line covering the dramatic events that filled Shinjuku’s days and nights.

“I already knew Shinjuku very well because it was my favourite place to hang out,” Kawamoto says. “I started university in 1964. The mid-60s were a sort of transition period between the first anti- Anpo (Treaty of Mutual Cooperation & Security between the United States & Japan) struggles in the late 1950s and the second wave of radical activity in the late 1960s. It was also the year of the Olympic Games, which helped people forget, temporarily, the social and political tensions of the previous years.”

As a nonpori (apolitical, non-sectarian student), Kawamoto spent the first two years of university poring over his books, but his life changed rapidly after that. “At first I attended lessons pretty regularly,” he says, “but from the third year I became more and more attracted to all the new exciting things happening in Shinjuku. I grew my hair longer and began to skip school. I’d go to the cinema, check out a new play or just spend hours at a jazz kissa (cafe).”

A keen observer of social customs, Kawamoto remembers that in those years, Japanese youth began not only to act but even to look differently. “Among high school students, there’s a big difference between the generation who fought the Anpo in 1959-60 and the later generation – my generation – who demonstrated in the late 1960s. The main reason was the advent of pop culture. Until the mid-60s, the teenage consumer market didn’t really exist. You were supposed to look and act like your father, join the adult world as soon as possible, and become a productive member of society. The older protesters rebelled against that mindset, and were mainly into politics, but their younger brothers embraced Western fashion and music – particularly pop and rock music. The Beatles records, for example, became available in Japan from 1963, and they were soon followed by The Rolling Stones, Bob Dylan and all the rest. “Even fashion-wise, the two groups looked very different: the older students went to the demos still wearing their school uniforms, but in the second half of the decade, more and more people started wearing jeans and casual clothes.”

Shinjuku was the place where all these changes became apparent for the first time, but in 1968, unless you were a policeman or a member of some radical group, you didn’t really want to be in Shinjuku, as the area – and especially its station (an important hub in the city’s transport network) – became the target of the protesters. “On 26 June, 4,000 students invaded the station and fought against the police and the railway staff,” Kawamoto remembers. “They did it again on 8 October, disrupting the transport of military fuel for the US Army.”

Eventually, the student movement and the anti- Vietnam War movement came together, and on 21 October – International Anti-War Day – organised a big demonstration, which descended into street warfare. “The district was flooded with people, it was crazy. The police deployed more than 10,000 officers in Shinjuku alone, and used water cannons and tear gas to fight the rebels who had turned the station area into a ‘liberated quarter’. They wrecked trains and burned police boxes for two hours. 700 trains were cancelled, disrupting 350,000 commuters.”

In the midst of all this mayhem, Kawamoto managed somehow to finish university. “By the time I graduated, my grades were so bad that my chances of finding a good job were pretty thin,” he says. “Then I found out that I had a chance of being hired by a news company because you didn’t need to have good grades in order to take their entrance test. Even so, I failed at my first attempt. I finally got in one year later, in 1969, at my second attempt, and began to write for Shukan Asahi.” As he was the same age as the demonstrators, Kawamoto was immediately sent to cover the protests, and Shinjuku – which he knew very well by now – became his main stomping ground. The Asahi has traditionally been a liberal, left-leaning newspaper, and Kawamoto’s editor was especially sympathetic towards the students. However, even the Asahi did not like the way the extremists were destroying civilian property. The day after the October 1968 Riot, for instance, the newspaper called them ‘a feckless mob’ and accepted police repression was legitimate. “The year I joined Asahi, the station’s west exit suddenly became a new pole of attraction for guitar-playing protesters who became known as ‘folk guerrillas’,” Kawamoto remembers.

The anti-Vietnam War movement had a long association with folk music and, in 1967, had even invited Joan Baez to perform in Japan. “In February 1969, folk musicians began to play at Shinjuku Station West Exit Plaza (a sort of underground arcade). Young people started to gather there, and their numbers grew so large that by May the whole area was swamped with thousands of kids.” Eventually, the police had to intervene to clear the place. In July, the Plaza was redesignated as a ‘thoroughfare’, and people were forbidden to stop there. “The hardest thing for me, as a journalist, was seeing all those kids beaten and arrested by the police,” Kawamoto says. “They were the same age as me, of course. The only difference was that I was there to do my job and, as a reporter, I was somewhat safe from the blows of the riot police. That made me think a lot. I wondered if it was right for me to just stay on the side and record what was happening, as if I had nothing to do with them. I’m sure many other journalists wrestled with this thought.” 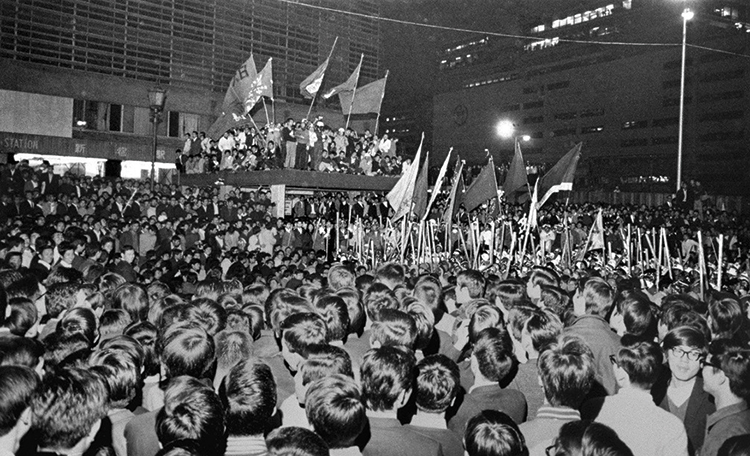 Kawamoto was sent to cover demonstrations in Shinjuku.

Another issue on which Kawamoto agonised while reporting arose when he was covering the US soldiers who were stationed in Japan. “There were a few military bases around Tokyo, and the GIs would often come to Shinjuku and other places to drink and have fun,” he says. “They often said, ‘You Japanese are lucky because you have nothing to worry about; you go out in the streets, shout NO WAR for a few hours, and then you go home. But we can’t do that. Tomorrow, we fly to Vietnam and we don’t know if we’ll come back alive’.” While west Shinjuku was serenaded by acoustic guitars, the east side was populated by a different kind of youth: the local hippies – or futenzoku (literally insane people, or vagabonds) as they were called in Japan. Rather than becoming politically engaged, these kids had simply decided to drop out and live on the edge of society. They neither went to school nor worked. They were simply content to lounge around on the patches of grass outside the station, while popping pills (their favourite drugs) and just enjoying doing nothing, careful not to follow in their fathers’ footsteps.

“The term futen became popular thanks to a comic of the same name by Nagashima Shinji, who was himself a school dropout,” Kawamoto explains. “I don’t remember which one came first, but this manga, which was serialised in Tezuka Osamu’s COM from 1967, was very popular. Until that time, most comic stories were about children and for children, but in Futen and other new comics from that time, the protagonists are people in their 20s whose lives closely resemble those of their readers. These characters drop out of school, don’t know what to do with their lives, and appear just to walk around the city with their friends, seemingly unable to find a way out of their confused lives.”