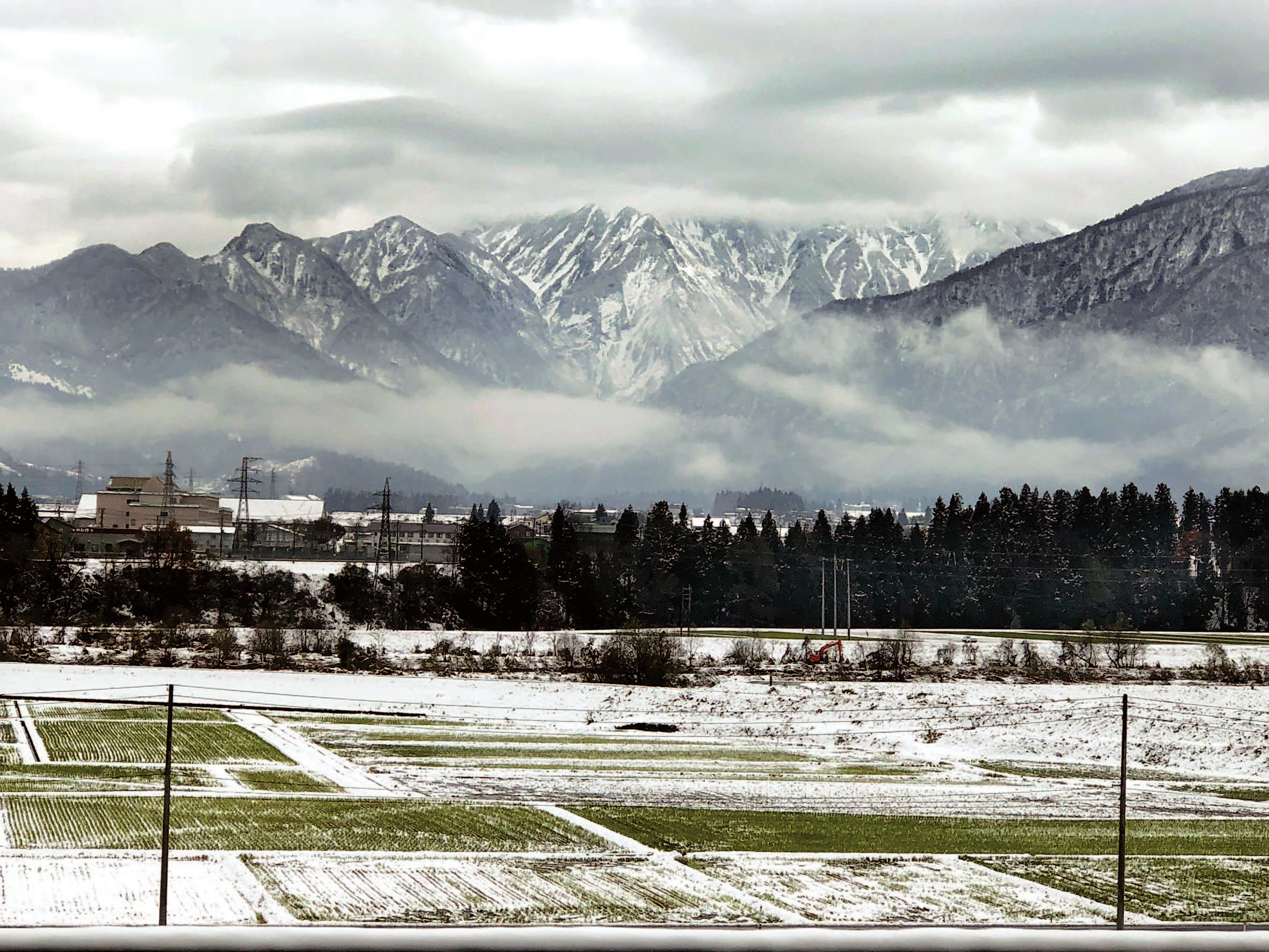 Landscape near Nagaoka where the first section of the Joetsu line was opened in 1920.

To discover this beautiful region, the local railway companies have some original options on offer.

“The train came out of the long tunnel into the snow country”. The opening words of Yukiguni (Snow Country, trans. Edward G. Seidensticker, pub. Penguin Modern Classics) by KAWABATA Yasunari is one of the most famous in Japanese literature, and accurately describes the shock travellers feel when they take train between Tokyo and Niigata in winter. In the capital and the surrounding regions, snowflakes are rarely seen, held back by the mountainous barrier that separates Japan from its Pacific Ocean side (Omote Nihon) and its Sea of Japan side (Ura Nihon). Of course, sometimes, snow-laden clouds do pass over and cause chaos in a large city that is unprepared for the resulting blanket of snow. This is obviously not the case in the eastern part of the Archipelago, which is used to such impressively large amounts of snow that most buildings have entrances at two different levels, the second being on the first floor to be used when winter is in full swing. Though the region is experiencing other effects due to climate change such as higher temperatures and less snow than in previous years, there is still a strong impression of arriving in another world after travelling through the series of tunnels that bring you into Yukiguni, made famous in Snow Country. And then, just one night of heavy snow is enough to make the trip take on a whole new meaning. The best way to fully experience and appreciate this aspect of Japan is undoubtedly by train. This is particularly so as Niigata prefecture, despite its small population, boasts a dense railway network and a highspeed line, which it owes to former Prime Minister, TANAKA Kakuei, who was born in the region (see pp.8-9). In addition, the inhabitants are honoured to have been among the pioneers of rail travel as the history of trains began in 1886 with the opening of the section between Naoetsu and Sekiyama, while the Tokaido line (Tokyo-Osaka) was yet as unfinished and there was still no railway in Shikoku or Kyushu. Nevertheless, it was not until the beginning of the 20th century that train travel took off in the region, allowing it to open up and develop trade with the rest of the country. The emphasis was on the need for a connection between Nagaoka and Takasaki, in Gunma Prefecture, on the other side of the mountains. One man in particular, OKUMURAMitsuru, supported the idea of building what would become the Joetsu line. In 1882, he opened an office in Tokyo to develop the project, which was finally launched in 1918. Two years later, Mr OKUMURA, then 85 years old, was the guest of honour at the opening ceremony in Nagaoka. At Ishiuchi station, situated between Nagaoka and Takasaki, his statue can be found watching over the railway line that changed the region’s destiny.

The construction of the Joetsu Shinkansen high-speed railway line in the 1970s considerably reduced the journey time between the capital and Niigata as it takes little more than two hours to cover the 330 kilometers separating the two cities. So tourists have no excuse for not visiting this part of the Archipelago. In addition, they can discover the diverse landscape and the wealth of the region’s cuisine thanks to JR East, which runs the majority of the regional railways and has introduced specially equipped trains to help them make the most of the opportunity. Those who are nostalgic about steam trains can take the SL Banetsu Monogatari, which runs between Niitsu and Aizu-Wakamatsu. For the past 20 years, the C57-180 steam locomotive, affectionally called Kifujin (Noble Lady) by train enthusiasts, was brought out of retirement for weekend trips for those who wish to travel back in time. Besides enjoying the beauty of the scenery at low speed from well-equipped observation areas, you can feast on a SL Banetsu Monogatari bento (1,000 yen), a lunch-box containing a meal based on a recipe dating from 1897, when it was first marketed.

While travelling through the region by train when it is not covered in snow, you are struck by the ubiquitous rice fields, which have helped to make the prefecture the main producer of rice and sake in the country. So it made sense to dedicate a train to the promotion of the “drink of the gods”. The aim of the ShuKura train service, a name that combines elements from the Japanese words for sake and brewery, is to promote the very best local sake while enjoying live music performances surrounded by attractive scenery. There are three routes available leaving from the Joetsu Myoko station served by the Hokuriku Shinkansen (Tokyo-Kanazawa) highspeed line. The first, called Koshino, ends at Tokamachi, the second, Yuzawa, goes to Echigo- Yuzawa, and the third, Ryuto, terminates at Niigata. For the first part of their journey, all of them travel along the coast of the Sea of Japan as far as Kashiwazaki and afford magnificent views over the ocean. These trains usually operate from Friday to Sunday, though you should always check the timetables on the JR East website (www.jreast.co.jp/e/joyful) for these and other tourist trains; simply choose your route according to where you want to go. For example, if you want to travel on the SL Banetsu Monogatari, it would be best to choose Ryuto, which stops in Niitsu, from where the Noble Lady departs.

One of the strong points of these tourist trains is that they share certain stations, which allows railway-journey enthusiasts to arrange an unforgettable weekend on board one or two of them. It is easy to imagine taking the Ryuto Shu Kura as far as Niigata then boarding the Kairi, so you can leave the prefecture travelling northwards towards Sakata, in Yamagata prefecture, via Tsuruoka. The last of these tourist trains to come into service, Kairi, was launched in October 2019. You can enjoy the magnificent coastline of the Sea of Japan from this train, which travels alongside it for the great majority of its route. The railway company’s idea was to highlight the indisputably delicious local cuisine. Combining seafood (kai) with peasant traditions (ri), gives passengers an excellent foretaste of what is available to eat in the region. All the care taken with the decor, settings and service, as with other trains of this type, is designed to appeal passengers, so that they can focus on the beauty around them.

For those who want to enjoy a different, more artistic kind of “beauty”, there is the Genbi Shinkansen. Their gaze is directed to the train’s interior, where works of art are on display. It operates at the weekend between Niigata and Echigo-Yuzawa, and it offers a unique rail travel experience, all the more intense and personal since the works displayed will be appreciated differently depending on who is looking at them.

The mighty JR East isn’t the only company to offer original trips. Smaller companies such as Echigo Tokimeki Tetsudo, which only operates two lines in the south of the prefecture, also tries to attract tourists with special trains. With its Setsugekka sightseeing train (www.echigotokimeki.co.jp/setsugekka/pdf/ setsugekka_english.pdf), which consists of two panorama carriages, the small railway company wants to offer passengers the most complete picture of Niigata prefecture, at least in terms of the landscape they travel through. It runs between the stations at Joetsu Myoko and Itoigawa, and also seeks to seduce the many Japanese train fans with specific features such as the underground station at Tsutsuishi and the switchback tracks (for a turning manoeuvre) at Nihongi station (in the direction of Joetsu Myoko-Itoigawa), whilst not forgetting food lovers, who can enjoy French cuisine while travelling in the direction of Joetsu Myoko. For 17,500 yen (£126), the almost 3-hour-long journey through stunning landscape leaves you with a lasting impression of Niigata’s beauty. For those who prefer to dream, another small local railway company, Hokuetsu Express Corporation, has chosen to take advantage of the numerous tunnels on the Muikamachi-Saigata section between Echigo-Yuzawa and Naoetsu to launch the Yumezora (https://hokuhoku. co.jp/yumezora.html), in which films are projected on the ceiling of the train while it travels through the tunnels. Several themes, including fireworks, which are a specialty of the region (see pp.13-14), add a very original dimension to this trip. Once again, this demonstrates that Niigata prefecture has maintained its lead in the sphere of railways as the Yumezora is the only train of its kind in the Archipelago, and KAWABATA would have undoubtedly started his novel differently if the train had existed in the 1930s when it was published.