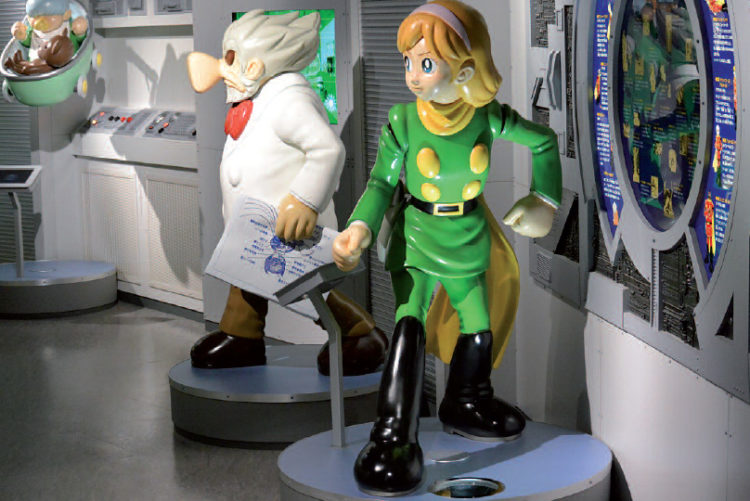 The Ishinomori Manga Museum, also known as the Ishinomaki Mangattan Museum, has some wonderful surprises for lovers of the work of Cyborg 009’s creator.

A tour around Japan on the trail of comic book heroes is easily arranged.

There are many good reasons to visit Japan. You could be captivated by its long history, and want to discover the riches of its historical heritage to be found everywhere in the archipelago. You might wish to discover its enchanting natural environment and delight in its unique landscapes. You might also be interested in its very original popular culture and want to go on the trail of those who’ve made us the way we are or shape our dreams. This journey is aimed at those who love manga and animation “made in Japan”, and begins in Tokyo. The capital is the starting point for many travellers, and an essential place to visit for pop-culture enthusiasts. Everyone has heard of Akihabara, which, over the years, has become the commercial centre of Cool Japan, attracting colourful crowds of people with its restaurants, boutique shops, bars, and other activities, but it’s Nagano district, situated to the west of Shinjuku on the Chuo line, which is far more interesting. Here, in the vast Broadway shopping mall, you’ll find a multitude of shops overflowing with treasures. Mandarake is the most famous, but there are dozens more where the most demanding of visitors can find something to satisfy their hopes and desires: old, sometimes rare, publications; all kinds of spinoff products; signed editions alongside the latest novelties. You’ll find it hard to resist when standing in front of the badly arranged window displays with their abundance of offerings. And even if you haven’t a penny, nothing prevents you from touching, browsing or rummaging through the clutter.

500 kilometres away, at the end of the famous Golden Route, along which millions of tourists travel nowadays, is the Kyoto International Manga Museum, inaugurated in 2006 to promote this genre of graphic expression, which has conquered most of the world in the last few decades. In comparison to the architectural treasures of the ancient Imperial capital, it’s housed, along with collections belonging to Seika University, in an unremarkable building – a converted primary school. The museum attracts around 300,000 visitors yearly, only 17% of whom are from abroad, yet it’s able to answer any queries people have about manga. There’s an enormous library with free access on three floors. It contains numerous foreign language translations, a display area setting out the history of manga in a clear and informative way, a space for temporary exhibitions focusing on a particular author or theme, and an extensive activity centre. Besides the performances of kamishibai (paper theatre), which take place during the day in an atmosphere redolent of the 1950s and 60s, there are workshops at the weekend and on public holidays These are also much appreciated by participants, who enjoy immersing themselves in the mood of nostalgia. The town council and Seikan University wanted to preserve some of the rooms of the primary school in their original state, which very much suits this kind of time travel. On the second floor, a huge sculpture of a phoenix by Tezuka Osamu underlines the important part played by the artist in the history of manga, and encourages the curious to go to Takarazuka, a little more than an hour from Kyoto, where they can visit the museum devoted to his work. The mangaka lived in the town from 5 to 24 years of age. His mother, who was a great music-hall fan, particularly loved the city known for its performances in which male characters are played by women, which is quite the opposite of kabuki. The museum, as his son Makoto wanted, is just a few metres away from the large hall where these very popular performances take place. The establishment is dedicated to the career and work of someone who’s considered to be the father of modern manga. On the ground floor, you can follow the different stages that led the young boy to become a great author, and we get to know him through his personal possessions, drawings, and writings. You can enter his world by continuing up to the first floor where there’s a room set aside for temporary exhibitions, often highlighting how influential Tezuka both was, and continues to be, 30 years after his death. In the little shop, you can buy an original souvenir, but it would be even better to make your own in the manga workshop in the basement supervised by Tezuka Osamu himself. Among Tezuka’s numerous “children”, Aoyama Gosho is one of the most talented, as proved by the success of his character, Detective Conan. Originally from Hokuei, Tattori Prefecture, you’ll find a museum dedicated to his work there, Gosho Aoyama Manga Factory, and it is worth a visit. It takes a little over three hours by train from Takarazuka, via Osaka and Kurayoshi, and this little museum doesn’t lack originality. In front of its entrance, Professor Agasa’s famous yellow VW Beetle welcomes visitors who, on entering the museum, are plunged into Conan’s world with the help of innumerable original items, sculptures, objects, and themed areas where they can learn more about Aoyama’s heroes. After this invigorating visit, rather than taking a taxi to Station Conan (the former Station Yura was renamed in 2013), it’s better to walk (20 minutes), as the way to the train is marked out by bronze figures from the adventures of the detective. 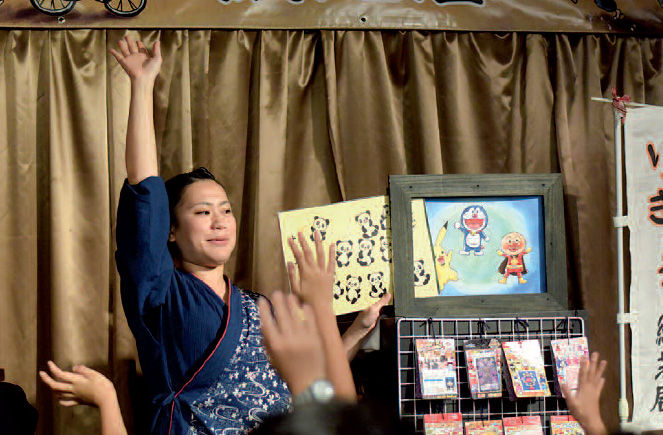 wrong train as it’s decorated with characters from his most famous series about Kitaro, the Ghost Boy. This port city was Mizuki’s home, and no visitor can ignore the fact. Statues, a temple, a fountain, the police station, the shops offering items inspired by the make-believe world of the mangaka, everything reminds you of this, even if you’ve only come to savour the delicious seafood available at unbeatable prices in the harbour restaurants. The museum dedicated to the artist, who died in 2015, is the cherry on the cake, and its contents will allow you to grasp the breadth of his work. Like Tezuka Osamu, Mizuki Shigeru left his mark on the history of manga, and his imprint can be seen in another city, Chofu, in the western suburbs of Tokyo, about thirty minutes from Shinjuku on the Keio line. This city, where the artist lived for forty years, has a “Kitaro promenade”, a street of shops lined with dozens of bronze statues of characters from the series as well as the Kitaro Tea House (Kitaro chaya) situated in the vicinity of the magnificent Jindai-ji Temple.

If you still want to continue on this journey of discovery of Japan through manga, you need to travel to the north east of the archipelago, to Ishinomaki, another port city, which looks out over the Pacific Ocean. It’s home to Mangatten, a museum dedicated to Ishinomori Shotaro, a major artist from the 1960s to the 1980s, who was on a par with his mentor, Tezuka Osamu. The tsunami which destroyed a large part of the city on 11 March 2011, spared this building resembling a flying saucer, and it remains as a symbolic reminder of the disaster. On arriving at the station, there’s no escaping the images of the characters that sprang from this artist’s fertile imagination, especially Cyborg 009 and Kamen Rider. They’re to be seen everywhere in the city, and in the museum, of course, where there’s a reconstruction of the laboratory in Cyborg 009. The whole place is a testimony to the accompli-shed work and legacy of this artist who died aged 60, as did his mentor. The city of Ishinomaki was given permission to use Sea Jetter Kaito, a character Ishinomari sketched out but never developed, as one of the symbols of the reconstruction after the 2011 tragedy (see Zoom Japan no. 52, July 2015).

While visiting these different places, you begin to understand that manga is not just an entertaining diversion but an essential element of Japanese culture. It’s embedded in regional and local traditions, something that’s hard to grasp unless you experience it on the ground. And it’s just as easy to visit the Kyoto International Manga Museum as it is to visit the Kinkakuji Pavilion, or to make a detour to visit Sakaiminato rather than the near-by Izumo Taisha, one of the most important Shinto shrines. There’s no doubt that manga makes a Grand Tour of Japan worth it.