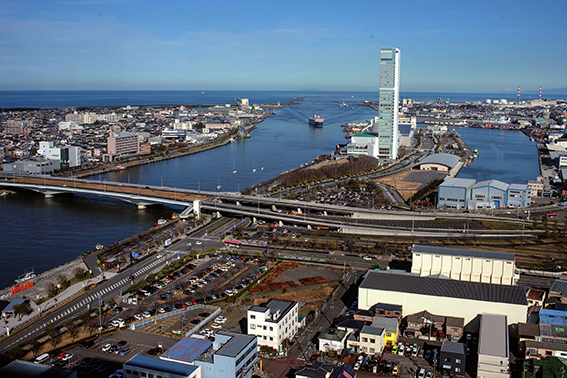 Niigata, the largest city in the prefecture of the same name, is a gateway to the Sea of Japan and its immense potential.

The hidden side of Japan

As the granary of the Archipelago, Niigata prefecture has experienced great hardship, but still has lots to offer.

Avisitor from abroad travelling through this prefecture for the first time is struck both by the prevalence of rice fields as well as the region’s incredible transport infrastructure and its extensive road and rail network. Rice grown in Niigata and the products derived from it, particularly sake, are rightly considered to be among Japan’s best agricultural products. The local farmers have gained a strong reputation not only thanks to their high-quality products but also to the influence they have been able to wield in Japanese politics. Their electoral clout at a time when the opinions of farmers carried a lot of weight explains why the prefecture was indulged and benefitted from huge investment which it did not deserve more than any other region in the Archipelago. Motorways and high-speed trains gradually invaded the countryside under the impetus of TANAKA Kakuei, still the most famous political personality in the prefecture, indeed in the whole of the country. A former Prime Minister (1972-1974), member of the Liberal Democratic Party (LDP), which has been in power since 1955 (except for two periods between 1993-1995 and 2009-2012), he is the archetypal post-war Japanese politician who consolidated his influence both thanks to his talent, certainly, but above all to his now legendary corrupt behaviour. It is probably no coincidence that the writer and former governor of Tokyo, ISHIHARA Shintaro, wrote a “first-person” biography entitled Tensai (the Genius), which sums up his character pretty well. He held sway over Japan at a time when Japanese political life was still very dependent on the support of rural areas.

In effect, at that period, farmers and politicians had become interdependent. Throughout spring and summer, the former would put pressure on the latter for an increase in the price of rice that the government bought during the course of the year. In Niigata, where agriculture had always played a central role, rural organisations were very powerful as they were able to mobilize significant funds to support the politicians who were most open to their demands, as well as encourage local voters to vote for the candidates who were sympathetic to them. This explains why, for a long time, TANAKA Kakuei benefitted from a solid electoral base in the prefecture. It has to be said that the system afforded the rural areas a certain advantage, which explains why their applications for subsidies (to counteract adverse weather conditions, improve soil infertility, etc.) were often granted. This give-and-take was a practice which served both parties well. TANAKA Kakuei, like his party the LDP, took advantage of it to hold on to power for very many years.

What also allowed the former government chief to retain this degree of support, was his commitment to promoting the opening up of the regions. Just prior to the first oil crisis, he published Nippon retto kaizo-ron (Outline Plan for the Reconstruction of Japan), a review of the future development of the country at a time it was facing numerous problems (pollution, urban concentration, etc.). In particular, his goal was to stem the rural exodus, which results in weakening the areas outside large urban conurbations. To achieve this, he speculated that the development of a modern transport infrastructure would lead to industrial growth. “It is possible to transform Japan into a richer, less polluted and more pleasant place to live than it is now. To do this, it is necessary to redirect the course of our modern history, which has focused on industry, people and culture in the main urban centres by shifting development activity away from more remote areas,” he wrote.

In other words, he wanted Japan to turn from its position of Omote Nihon, its advanced Pacific Ocean public side, in favour of its Ura Nihon, the less populated and underdeveloped private Sea of Japan side. He encouraged infrastructure investment in Niigata, where he was born, as he considered it to be the ideal place to realise his ideas. He like to talk about “the dawn of a new age, one of rocket trains”, which “could run at 500 kilometers an hour, or almost twice as fast as today’s trains”. Though his project was not completely without foundation, nevertheless it has many limitations. On one hand, Niigata was already sparsely populated, and construction costs for the 270-kilometer high-speed line alone were to skyrocket due to the terrain, which made the work extremely complicated. However, the local population did not begrudge the cost, just as they took no notice of his involvement in the Lockheed scandal, which, ten years later forced him to resign from his position as Prime Minister, and led to his being sentenced to 4 years in prison. Even today, for the majority of Niigata’s inhabitants he is the politician of whom they are most proud. And for good reason, as, over the years and with the reform of the electoral system they have lost their former political influence. The market for rice, of which they were the fiercest guardians, has opened up to foreign produced rice, while their votes now carry the same weight as city dwellers. And as there are so few of them, they are unable to defend their interests so vigorously. The LDP no longer needs their support to hold on to power since urban voters, disappointed with the opposition, now also vote for the party of the established order. TANAKA Kakuei maintains his good image though his “speculation” has failed. The country is certainly richer and less polluted than in the 1960s and 1970s, but the inequality between urban and rural areas has not been resolved, rather it has worsened with the effect of demographic changes.

As the daily newspaper Niigata Nippo reported (see pp.6-7) in January, in a series of articles neatly entitled “Sanbyaku kiro no kontorasuto (300 kilometers of contrast), about the divide that still exists between the capital and the wider region, Niigata prefecture has suffered more than elsewhere from the consequences of demographic decline. With 14.7% of its houses empty, abandoned after their last inhabitants died, the region is about one point above the national average (13.6%) and 4 points above that in the capital. The worst thing is that the trend has accelerated over the past 5 years in Niigata, while it has stabilised at the national level and is decreasing in Tokyo. Sadly, this highlights the obvious fact that government policy has shamefully failed to ensure recovery in the regions.

However, Niigata prefecture has many assets. Its geographical position places it at the heart of East Asia, which means it could become an important centre of activity in the event of strengthening economic ties in the region. At the close of the 1980s and start of the 1990s, at a period when European integration captivated the world’s imagination including Asia, a vast economic initiative between the Russian Far East, Northeast China, North and South Korea, and that part of Japan overlooking the Sea of Japan saw the light of day and aroused a great deal of enthusiasm in the region of Niigata. Several investment projects were broached, air links established between the different regions in the scheme, and dozens of books detailing the potential benefits for the prefecture published. It was a time when a large number of used-cars dealers set up shop in the hope of exporting these second-hand cars to nearby Russia where the concept of Made in Japan was a dream come true. Political problems at state level compromised this idea of an economic zone around the Sea of Japan, though one can imagine it could possibly happen in the years to come.

While it waits, Niigata can still rely on the wealth of its agricultural production, which remains robust in spite of the region’s ageing rural population, so much so that the Japanese government hosted the G20 Agriculture Ministers’ meeting there in May 2019. Sake, the other flagship product of the region, is currently the subject of a wide-ranging campaign of support on the part of the Japanese authorities in the hope of promoting it more beyond the country’s borders. Thanks to its know-how and the quality of its production, Niigata can expect to reap the benefits of international enthusiasm for “the drink of the gods”. It appears that certain people have become aware of the importance of preserving traditions in this regard, as underlined by the creation of a sake research group last spring on the initiative of Professor SAWAMURA Akira from Niigata University. After all, nothing could be more normal as there are around 90 sake breweries in the prefecture, the highest number in the country.

Other valuable resources the prefecture can count on are its tourist potential and the warmth of its inhabitants. In effect, it has all the elements to make it a successful destination for visitors from abroad. The city of Niigata and its Furumachi district can rival Kyoto in terms of its geisha. There are about thirty geigi, as they are called here, to enliven the district in its ryotei (traditional premises) where they dance, sing and perform to the delight of their clients. They have an advantage over the former Imperial capital in that they are more “accessible”. Shibata, several kilometres from Niigata, is also full of character. Yahiko Shrine, to the south of Niigata, is a magnificent example of Japanese architecture. It houses the Shida-no-Otachi, the longest sword in the country, and its 30 meter high torii is unfailingly impressive. Sado Island, Nagoaka’s fireworks (see pp.13-14) and its snowcapped mountains are other first-rate attractions, which the prefecture can rely on so it is not judged to be the unduly hidden side of Japan. Beside which, it is only a short two hours’ train journey from Tokyo.