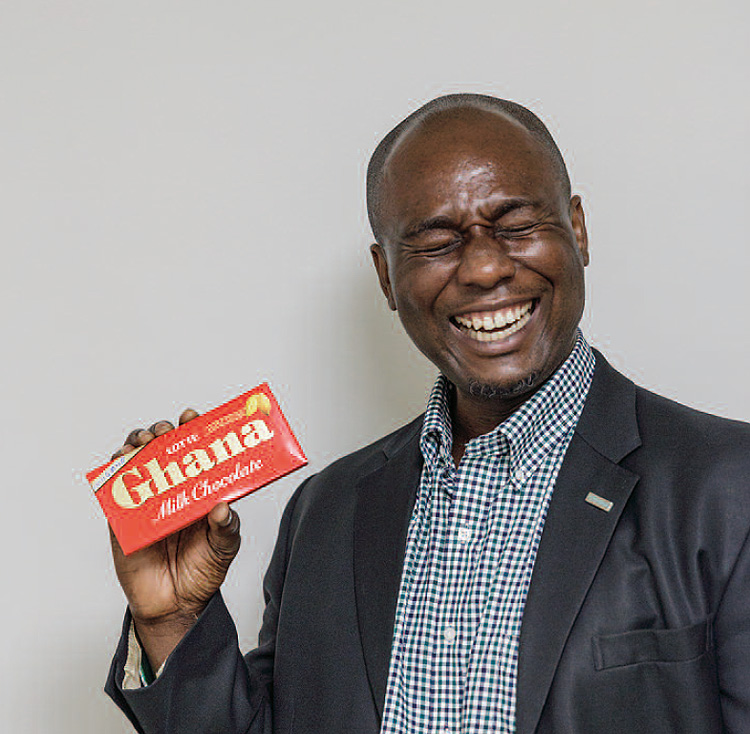 Michael, David and Sanshiro Yano had a tough time before they became well-known.

After living in the archipelago for 28 years, Nanayew Sanul Aning recalls how he became a citizen of his host country.

In the trendy neighbourhood of Akasaka, Pop greets me with a bow, extending his meishi (business card) with both hands in the traditional Japanese way. “Yoroshiku onegaishimasu!” says this 1.92-metre-tall Ghanian in perfect Japanese. On the wall of his tiny office, you can see publicity posters of him posing as a businessman for the Seven Bank, an international money transfer service offered by Seven Eleven, the largest chain of convenience stores in Japan. To give him his real name, Nanayew Sanul Aning, Pop arrived from Accra, where he was born, in 1990. Starting out as a street vendor, he became a Japanese television star, acted in the film Godzilla and sang the Ghanian national anthem at the start of the Ghana-Japan match at Yokohama, before setting up his own management company. This is a quick sketch of the rise of the “king of chocolate”.

What was your life like in Ghana?
Nanayew Sanul Aning :
When I was born, in 1969, Accra was just a small town. My father was a music teacher and lecturer in African studies. He was married to three wives, and we were eleven brothers and sisters. As is often the case, I lived with my sister from the age of 9, and she taught me. By 15 years of age, I was already very resourceful. I managed a restaurant and met many people. The expats liked me a lot. Then, when the restaurant closed down, I became a street vendor. I would walk for miles selling clothes, tomatoes and oil!

Tell us about your arrival in Tokyo.
N. S. A. :
My elder sister got married to Yano Mitsuaki, a Japanese man who worked in Accra. Then, they moved to Tokyo with their three sons, who later formed the Yano Brothers band! (See p. 8). Her husband invited me to Japan. I was very good at repairing electronic equipment, and he wanted me to come over and perfect my skills and knowledge. So, one day in 1989, I walked off a plane at Narita airport. I was 20. I felt completely lost. I didn’t even know how to walk on a conveyer belt.

Nobody was there to pick you up?
N. S. A. :
My sister had forgotten I was coming (laughs). At the airport, all I could say was “moshi moshi”, meaning “sorry” in Ghana, but “Hello!” in Japan. No one had a mobile in those days, and everyone must have thought I was mad! But, everyone was very kind, helping me to find my way, catch the train, the metro, and finally the police got me a taxi that dropped me off at my sister’s house. But at that time of day, there was no one at home! I was dying of hunger and went into a mini-market. I picked up what I thought was the least weird looking food, and tried to pay for it in dollars! Normally, they would not have been accepted, but on that day, God was watching over me! They gave me my bento. I’ll remember the day I arrived in Japan until my dying day.

Did you start work straight away?
N. S. A. :
First, I took a two-year course of Japanese at Waseda University. I wore a padded jacket that resembled popcorn, hence the nickname Pop. Then I started to work as a waiter in a karaoke bar in the Ueno district. I loved to sing! One of my colleagues told me they were looking for foreign singers to perform on TV. I passed an audition for Fuji TV performing a very well-known traditional Japanese song (enka), Yosaku by Kitajima Saburo. I won first prize for the best foreign singer in the Japanese language! That triggered my career in show business.

So you became a talento, as show business stars are known in Japan?
N. S. A. :
Yes, I joined the ranks of talento and, at the same time, became a manager in the largest agency representing foreigners, the Inagawa Motoko Office (IMO) for 13 years. I had roles in TV shows and commercials, films, and sang as well. At that time, there were very few foreigners in Japan, let alone people of colour, so there was lots of work.

How were you perceived, as an African?
N. S. A. :
Well, I have no traumatic memories. Japanese are mistrustful by nature, it’s an insular country, but they are no more suspicious of people of colour than any other foreigners. That was my understanding, so I didn’t worry about it. Only once, a man called me “kuronbo” (nigger) in the street in Shibuya, in central Tokyo. I was 21 years old, but I already knew Japanese slang, and I was hot-headed! We started to fight. Luckily, the police intervened, otherwise I don’t know what I’d have done to him!

What do you think of Japan?
N. S. A. :
I love this country. I’ve been here for 28 years now. I have a Japanese wife and three children, friends and a job. Japan is an ideal place where you can learn and benefit from all it has to offer. Before, people with next to nothing would migrate to the United States to try their luck, but for me, this is where it’s all happening. It’s the “Japanese dream”!

You have Japanese nationality. That’s quite rare!
N. S. A. :
Yes. It was an uphill struggle, but I was granted it after spending more than twenty years here. But I wasn’t able to keep my Ghanaian nationality, as Japan doesn’t recognize dual nationality. It was a painful choice. Every year, when I go back to Ghana I have to obtain a visa, it’s very strange. I hope that Japan changes its mind one day.

Have relations between Africa and Japan improved since the 1990s?
N. S. A. :
Yes, of course.The Japan International Cooperation Agency (JICA) is very active in Africa, and regularly organises cultural festivals in Japan to spotlight the unknown countries of our continent. But there’s still a lot to be done. The African community here has to fight to survive. Despite integrating well, it’s undeniable that there’s more work for Caucasians than us! But I think we need to change the way we think about things. Africa must learn to develop without depending on Europe. Asia is another place Africa can look to, and vice versa.

In an interview, you said that the only thing Japanese know about Ghana is its chocolate…
N. S. A. :
Yes, it might seem surprising, but there’s chocolate in Japan called Ghana. Unfortunately, the Lotte company, who’ve been marketing the chocolate since the 1960s, buys Ghanaian cacao through a Belgian company. It’s like oil: they get the raw material from us, then they sell it back to us. Ghana is the 4th largest producer of cocoa in the world, but earns next to nothing from it. Sometimes, I wish I could become president of Ghana in order to change things!

You now have your own company?
N. S. A. :
My company, Bayside, manages around 500 foreign or mixed-race actors and models. One of my latest jobs was a three-year advertising contract for Seven Bank. It’s a much better system than the one offered by Western Union for sending cash to Africa. I was distributing their pamphlets at the African Festival in Yokohama, and didn’t think much of their advertising, so suggested they try my agency, and they ended up using us for their posters. Africa is certain to become a large market for Japan and money transfers.

What are you future projects?
N. S. A. :
I’m in the process of setting up a project called Afro-kids to promote children of colour, whether they’re African or mixed-race, to get into show business as singers, for instance, but also to encourage them with their education. In fact, I’d also like to help politicians, because my dream is to one day see an Afro-Japanese in the Diet.