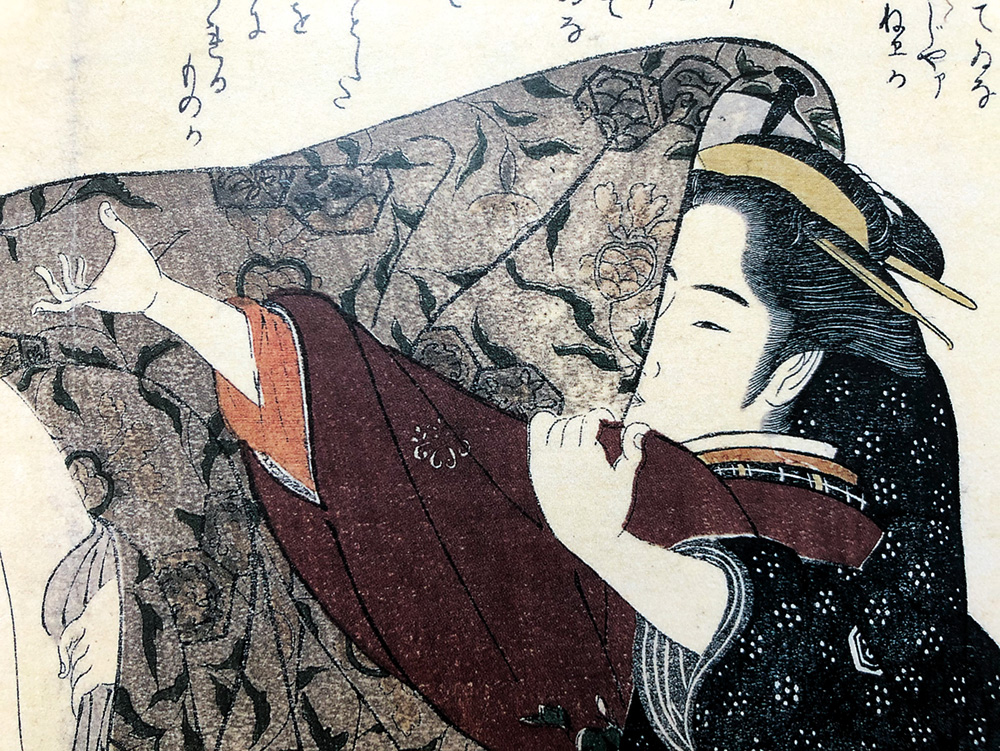 Philippe Pons and Pierre-François Souyri invite us to explore the world of sexuality and eroticism.

Published in France at the beginning of October last year, L’Esprit de plaisir: une histoire de la sexualité et de l’érotisme au Japon (17e-20e siècle) [The Spirit of Pleasure: a history of sexuality and eroticism in Japan (17th – 20th centuries)] is the fruit of a long period of research and deliberation by Philippe Pons and Pierre-François Souyri. The former, Tokyo correspondent for the French newspaper Le Monde, has already treated us to several books exploring the margins of Japanese society, while the latter is emeritus professor at Geneva University, and they are both leading experts in the history of Japan. Their combined erudition allows us to enjoy a work of rare quality which enables us to discover another facet of Japanese culture and society.

What motivated you to write this book?

Pierre-François Souyri : The history of sexual mores is part and parcel of social history. There are academic books in Japanese and English about periods in history or on specific topics such as red-light districts or moga (Western influenced “modern girls”), etc. In our case, we’ve tried to understand the dynamics during the period from the 17th to middle of the 20th century and to highlight the impact of Japan’s contact with the West from the middle of the 19th century. Japan then moved from a concept of pleasure enjoyed with no restrictions other than social prohibitions to it being considered a sexual science, an idea imported from the West, which pursues a presumed normality by rejecting in a void of obscurantism and pathology, practices that had never before been considered problematic. For instance, heterosexuals had never been excluded from carnal relations between persons of the same sex.

I understand that this book took many years of hard work. Why was that?

Philippe Pons: Indeed. When we started, we were thinking of writing a kind of essay on eroticism, but we found that the subject was infinitely more complex and necessitated researching not only the historical, social and political context of the periods being covered but also their literary and iconographic context. And it to took us several years to write.

What is striking in your book is the Japanese relationship to sex, which is very different from that of Westerners.

P-F. S.: In Japan, before contact with the West, sexuality was not inhibited by any kind of guilty conscience (suspicion, guilt about pleasure) or religious moral consideration. Buddhism is not concerned with sexuality as such, it does condemn desire as an illusion but does not consider sex any different from any other pleasure. It is not a fortiori part of the Shinto religion. Sexuality was regulated by propriety, in other words, by social prohibitions, and carnal pleasure was part of the art of existence, which is inherently hedonistic.

You obviously devote many pages to the prints of a sexual nature that enjoyed considerable success during the Edo period (1603-1868). They also differ from the far less artistic and subtle Western examples. What conclusions do you draw from that?

One last detail about shunga: it’s an art that was rejected by Japan. The majority of the most representative works were bought by foreigners in the 19th and 20th century, and can be found in museums worldwide (Boston, London or Paris) or in private collections. In the Archipelago, they are the hidden treasures of individual collectors or languish in inaccessible museum archives. Officially, Japan draws a veil over its rich erotic art as though it might stain the good image of its Grand Tradition – the Art of Tea; Kabuki, which has been ‘purified’ of anything confrontational that it contained before the Meiji period; and Noh theatre – while allowing a prolific sex industry to develop including a flourishing pornographic sector.

When researching the red-light pleasure districts that so fascinated Western travellers, what interested or even astonished you the most?

P-F. S.: Relegated to the outskirts of cities and often in a compound surrounded by ditches, the pleasure districts were an alternative world, the reverse of the regimented society of the shogun era. The social order outside the compound no longer prevailed: samurai had to leave their swords at the entrance. As a safety valve for a repressed society, they provided creative focus during that period not only due to the presence of artists, musicians, painters and actors but also because of the ceremonial surrounding any meeting with a high-status prostitute, who would herself have been steeped in refined culture as testified by the poems they sent to their clients, who also had to demonstrate they knew how to behave properly. The pleasure districts were comprehensively described in literature and depicted in prints, starting with the great courtesans, the arbiters of fashion. What’s perhaps most striking about these districts is the refinement and splendour of the festivities held there, enhanced by boat trips on the river Sumida for which rich merchants paid a fortune. But this refinement was in stark contrast to the sordid life and suffering of the low-class prostitutes sold by poor families. They died young: the ashes of tens of thousands of them rest in Jokan-ji temple, nicknamed the “temple of forsaken souls”, not far from the remains of the famous red-light district of Yoshiwara in Tokyo. The situation was worse in the unauthorised red-light districts located in the first post towns on the main roads out of Edo (Shinagawa, Shinjuku and Senju).

Ph. P.: Meiji’s leaders officially freed the prostitutes while maintaining the red-light districts, and prostitution flourished in the unlicensed districts. At the same time, they turned the Japanese relationship with sexuality up side down by espousing the norms and prohibitions of Western society. At first, they thought that since these foreign countries represented modernity (and posed a threat to Japan), the Archipelago needed to counteract by strengthening itself economically and militarily and adopt the West’s institutions, technology and morals. Reforming sexual mores was part of a collection of measures (a ban on mixed public baths, tattoos, etc.) aimed at appearing “civilized” in the eyes of Westerners. Carnal pleasure became a matter of morality for forensic medicine and the police. The range of accepted practices narrowed and desire, now in a straight jacket, was refocused on wedded couples making love in order to reproduce. Women’s virginity and chastity became sacred – which was not previously the case among the working classes – and arranged marriages (customary in the samurai and rich merchant classes) were extended to the whole population. Industrialisation and abolition of the feudal system gave rise to a popular mass with no ties, and the rulers soon found themselves confronting the same problem as the Western bourgeoisie. The moralisation of the behaviour of the working classes, potentially the dangerous classes, was no longer a means of earning the respect of imperialist powers by appearing “civilised”, but became an instrument to politically controlling society. Desire had to be disciplined, wasted energy repressed – while channelling it towards acceptable expressions of venal love among both the middle and lower classes in order to put the population to work. 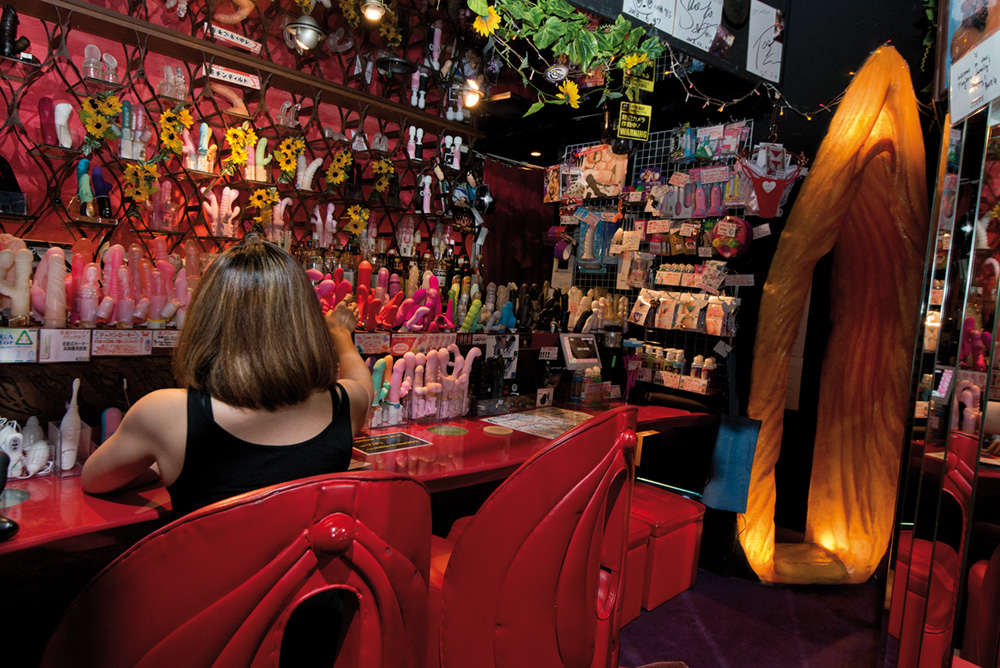 The Vibe Bar with its hundreds of sex toys and sex objects, situated in the district of Shibuya, Tokyo.

P-F. S.: The sexual morality imposed in the Meiji era and the refocusing on married couples had the effect of placing women in a more subordinate situation, similar to the model that prevailed in the samurai classes. Despite proclaiming the advent of modern values, the women of the Meiji era were subjected to greater restrictions than before. It wasn’t until the turn of the 20th century that Japan began to break free of this moral straight-jacket in favour of political, social and cultural openness, later called the “Taisho democracy” (1912- 1926), which in fact extended beyond this imperial era. A number of writers and militant feminists contributed to freeing themselves from the phallocentric vision of the time by writing, often very intimately, about women’s desires, sensuality, expectations and passions. Depictions of sexual playfulness became a component of the cultural phenomenon known as ero guro nansensu (erotic, grotesque, absurd) in the 1920s and 1930s, which nurtured uninhibited creativity. It was a liberation of mind and body reminiscent of cosmopolitan Berlin of the Weimar Republic with its frivolity and disrespectful exuberance, which tapped into the mood of the time while being quite oblivious to the gathering clouds. This was the great era of the emancipated modern girl, of challenging the normal/abnormal dichotomy (the emergence in broad daylight of lesbianism, the return of the gender game and homo-eroticism) before the curtain fell with the rise of militarism in the early 1930s. This spirit of pleasure, an expression of a kind of passion for life and a glorification of the body will reemerge in the ruins of defeat in a frantic quest for enjoyment, which is marked by nihilism in the work of some authors. The time under American occupation was the most libertarian period Japan had ever known in sexual matters. The occupier hounded out any resurgence of militarism, but paid little attention to the morals of the defeated. With the return of sovereignty in 1952, this short libertarian interlude ended. Japan had to exorcise its past and appear to be a well-behaved country. Prostitution was banned in 1958, though venal love was allowed to proliferate in other forms such as an ever-changing erotic pornographic consumerism in marketing fantasy.

Your book ends with the years 1960-1970, a symbol of the revolt against a society that was considered too strict. Why?

Ph. P.: We decided to end with the 1960s as it was the start of a period of high economic growth which gave rise to prosperity. Under the influence of Americanism and globalisation, the way carnal pleasure was mapped out and imagined changed profoundly. Eroticism became a standardised fantasy world, representing the “ever more” consumer society with, of course, its own characteristics – like an inventiveness that censorship struggles (or hardly tries) to control. What remains of the spirit of pleasure in today’s Japan? It’s an issue that goes beyond the historical objective of this book. Undoubtedly, part of the landscape of pleasure is the example of the sometimes extravagant decor of the love hotel – hotels for couples with no luggage where they can spend a few hours together (see pp. 20-23), or the world of bars and hostesses , whose “take” is never certain, but which while part of the system of venal love, plays a game of seduction (though lacking the aesthetics of seduction in the world of geishas). Under the guise of globalised mores, an overlap of ancient and modern concepts could exist in Japan: a hybrid of the latter and the former, to help loosen the stranglehold of an enforced normality. This is merely hypothetical.