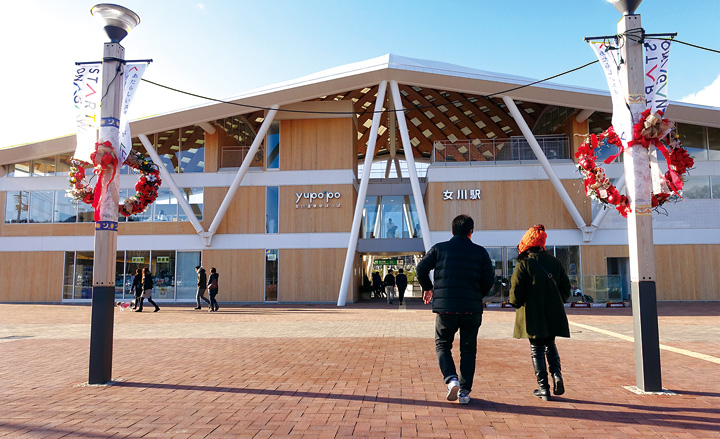 This port city is being rebuilt five years after the ravages caused by the tsunami, thanks to the commitment of the local inhabitants.

On the slopes of Onagawa hill you will find the belvedere of the hospital that overlooks the city, and from there you can see an amber coloured tongue of land that slips between two mountains as far as the ocean. Mechanical diggers have been working here for five years now, and the locals wave their arms towards the horizon, indicating the places where homes were swept away. They also re-trace the path of the main avenue that used to lead down to the marina and its shopping centre, which was also destroyed by the tsunami. On the afternoon of the 11th of March 2011, the wave surged over the city, destroying almost all of the buildings. The hospital endured as it’s first floor overlooks the sea at a height of 16 metres, but it was also badly flooded. The damage was repaired and the hospital renovated thanks to donations from Switzerland, but now a new city is taking shape outside. Onagawa railway station is the terminus of the Ishinomaki line and came back into service in March 2015. It was rebuilt 100m from its previous location, 9 metres above sea level, and has been designed as an entrance to the new city-centre. For the time being, the locals come to visit out of curiosity. Most of them still live in prefabs built on high ground, and they seem happy with the results. The atmosphere is relaxed, and is attracting new kinds of visitors who come from further afield in order to rediscover the redeveloped fishing port. After the tsunami, the initial reconstruction project included a dike, which could have formed a barrier between the city and the sea. Following government directives, many other cities damaged by the great wave also made this choice. As a result, Ishinomaki’s neighbouring city, where an entire district was swept away, saw its view to the horizon reduced by 7 metres. Whether in a car or a bus, visitors will travel the length of its seafront in the shadow of a gigantic concrete wall built to a height based on the once-in-a-lifetime tsunamis from the past.

However, Onagawa turned down the authorities’ plan; the inhabitants took their fate into their own hands and decided to rethink and remodel the town. After the disaster, there was a growing awareness that the city could take advantage of the situation. A new, younger mayor, aged 39, was elected and he left his job as a department deputy to dedicate himself solely to the city. A market and a makeshift ‘city-centre’ were built on the outskirts of the city, and a publicity campaign was started up by the Kahoku regional press to promote and support it. Sixty graphic designers created humorous portraits of its shopkeepers and then circulated them on social media networks, meaning that the city started attracting more attention. Dedicated areas for meetings and assemblies also brought the inhabitants closer together. The Maskar factory, specializing in frozen seafood, one of the fishing port’s main resources, started up again in 2012, with support from the people of Qatar. People now travel from far and wide to eat the Onagawa-don, a bowl full of fresh fish and shellfish on a bed of rice, that is served in one of the few restaurants open on the seafront. Today, people are once again full of emotion and enthusiasm, encouraging the locals to be open to tourism in order to guarantee the life force of this small city in the northeastern part of the country. A new company has been created, called Onagawa Future Creation, and its aim is to rebuild and rethink the heart of the city. The new mayor supports the project. >>This enterprise is a publicprivate partnership of a new kind, allowing the city to move in a new direction. Omi Koichi, manager of the Ishinomaki Hibi Shimbun (with which Zoom Japan has developed a friendly partnership since March 2011) and the lynch-pin of this project, hopes to give the fishing port another dimension. Rather than build a dike, Onagawa seafront was raised 7 metres above sea level. Opened in December 2015, the new city-centre is concentrated around a central promenade with large avenues leading down to the sea. “In the case of a tsunami, the biggest danger would be not to see it coming,” says Konno Masahiko, one of the architects in charge of Onagawa Future Creation. The main road ends in a long strip of wire fencing and building work continues on the other side for another hundred metres down to the sea. Among the rubble is the old police station, lying on its side. It has sunk into the ground and is surrounded by earth to a depth of seven metres.

The station has been kept this way as a reminder of the previous ground level of the city and is the one and only building left to testify to the tsunami’s violence. There is an area where you can read peoples’ stories, find out about the local initiatives or buy souvenirs related to the events of March 2011, such as a book of photos with a “soup” of submerged buildings on its cover. These kinds of souvenirs are sold on one of the new stalls opposite a busy cafe. Though there are very few locals around at the moment, the alleyways are always full of curious visitors coming from the station or one of the car parks. The new station represents the first stage of the reconstruction, which should be finished by 2021. A lot of land is still free of building work, which makes the city centre enjoyable to stroll around, even though it is still basically just a collection of shops and cultural venues. Onagawa Future Creation hopes to maintain this balance by opening workshops for artists, offering residencies and developing various projects to attract tourists and investors. The company has already taken on young sales people, because it hopes to attract new pupils to its primary and high schools. Youth has been given an important role in the vision for the city’s future. For example, Omi Koichi is head of the local football club that was created in 2006 and provides a good way of including young people in developing the region through sport. The tsunami destroyed the football stadium, but Onagawa wanted to hold on to its team: the Cobaltore. The club was able to restart its activities one year after the disaster, with the team announcing their ambitions to rejoin the first division and attract new supporters. The junior team has also started training again and has access to a new training centre. By the end of 2016, the cultural centre’s buildings and the shopping mall dedicated to local produce will be finished. The promenade will be extended and the inhabitants will once again have access to the seafront, now raised and around two-hundred metres away from the old city-centre. For the moment, mechanical diggers are still working to create terraces in the surrounding hills and it is easy to imagine the buildings that will light up Onagawa Bay in the future. The city-centre will also be expanded with the opening of wide starshaped alleys leading up to the hills, in order to facilitate evacuation to higher ground in the event of another disaster. Finally, much of the neighbouring land is being sold for building new homes. This little fishing port is being transformed slowly, but its population is aware of the value of making their future city look great. As a start, all of the typical Japanese electricity pylons have been replaced with elegant street lamps.