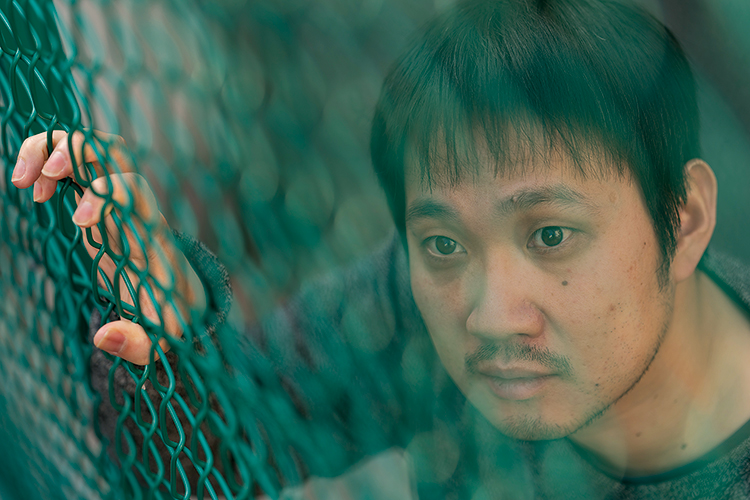 HAMAGUCHI ryusuke has cast convention aside to create his own unique style, unanimously praised by audiences and critics.

After just a few years and relatively few films, this young director has created his own unique style to portray people’s lives. Have you always been interested in films?
HAMAGUCHI Ryusuke : I remember the first time I saw Back to the Future. I was in elementary school and I thought it was so cool. When I entered the university of Tokyo, I joined a film study club and began to make short films. Then one day, when I was around 20, I went to a John Cassavetes retrospective in Shibuya. His work left such an impression on me that I became really serious about film-making. The more films I saw, the more I felt I wanted to tell my own stories.

Did you start working in films soon after graduating?
H. R. : After finishing university, I became an assistant director, but I felt I wasn’t ready yet. Schools teach you a lot of theory, but nothing really prepares you to work on a real set. I was scolded a lot because I was totally clueless. So when I heard that Tokyo university of the Arts (Geidai) had started a Film and new Media School, I became a graduate student. My teacher was director Kurosawa Kiyoshi, who had a great influence on my approach to film-making.

Speaking of film-making, your debut film Passion (2008) already features your trademark style, which focuses on dialogue, the way characters move their bodies, and a detailed portrait of human relationships. I’d like to know how you developed this style.
H. R. : As I said, as a student I’d fallen in love with Cassavetes. The problem was, I couldn’t make anything even remotely comparable to the great American director. So in my early 20s, I mainly tried to replicate the classic films I’d seen. I lacked both talent and money, so I built my stories on dialogue, letting the plot slowly develop from those scenes, while focusing on camera movement and placement. However, I found this approach unsatisfactory; I felt I was limiting the energy the actors could bring to the story. At Geidai, I began to change my style, allowing the actors to move freely around the set during the shoot. That’s the same approach I used in Passion, following the actors with my camera while they moved around. Of course, the fact that I was using professional actors with greater experience and skills helped a lot.

I think Happy Hour (2015) is the only film where you used non-professional actors?
H. R. : Yes, that’s right. They had no previous experience whatsoever. In Intimacies (2013) the actors were acting-school students, so you could say they were semi-professionals.

You are known for using both written dialogue and improvisation in your films. How do you achieve the right balance between the two?
H. R. : It’s quite difficult. That’s why I mostly use carefully written dialogue and limit improvisation to particularly lively scenes where you almost don’t know what’s going to happen next, and the energy level is very high. The real problem is how to integrate both styles into the same story, as the actors move and act very differently in each of them. In any case, I always write the dialogue for the more important scenes – those that represent the heart of the film and are used to move the story forward.

After making a couple of feature films, in 2011, you started a collaboration with director Sakai Ko on a documentary project about survivors of the Tohoku earthquake and tsunami, which resulted in three films: The Sound of the Waves (2011), Voices from the Waves (2013), and Storytellers (2013). How did you get involved, and what role has this project played in your filmography?
H. R. : When the events of 3/11 happened, I was finishing Intimacies. Like many other filmand video-makers, I was struck by the tragedy and wanted to see with my own eyes what had happened in Tohoku. So when I was offered a chance to film in the area, I accepted immediately. After wandering around the disaster area, I realised I needed a crew and called Sakai and cameraman Kitagawa from Geidai to help. At first, Sakai was supposed to be my assistant, but later I decided it would be better to share ideas and responsibilities, and he became co-director. To answer your second question, these films have been a very important step in my evolution as a film director. If I hadn’t made these documentaries, it’s probable I wouldn’t have made Happy Hour either. In particular, for the first two films, we chose several pairs of people (family members, friends, etc.) and asked them to talk about anything they wanted to. I was worried this approach wouldn’t work, but quite surprisingly, they had no problems talking in front of a camera, and their conversations were very lively. That made me realise that I could successfully work even with non-professionals, and I later used this experience when I made Happy Hour. Also, I realised that making documentaries wasn’t all that different from making fiction. Last but not least, after working so closely with the people from Tohoku, directing on set has become my favourite part of the film-making process. After all, you can write the perfect screenplay, but it’s on set that the story comes alive; it’s on set that the director has a chance to develop a special relationship with the actors based on mutual respect and understanding.

Let’s talk about Happy Hour. This film developed in a very strange way, didn’t it? Did the people who joined the workshop know that the whole experience would result in the making of a film?
H. R. : Yes, this information was included when we advertised the workshop. We got 50 replies, so we held an audition and chose 17 of them, both men and women. In the end, they all appeared in the film, including the four women who play the main characters. My main inspiration for this story – and the reason I chose four women to play the leads – was John Cassavetes’ Husbands. His film is about four middle-aged male friends, and I liked the idea of making a female version. Also, in both stories one of the friends dies. I must say that when I first showed the script to the would-be actors, it raised a lot of questions. There were points they didn’t understand (e.g. why does this character act this way?), and that convinced me I’d better simplify or change certain things so that everybody could act more convincingly.

You’ve mentioned Cassavetes several times in this interview. Why do you like him so much?
H. R. : Because his films smell of real life. Watching one of his films is like watching real people living real lives, not actors in a fictional story. When I first saw his films, they even felt more real than my own life. It was a truly eye-opening experience.

When talking about your films, you often talk about “searching for a good voice” or creating the conditions for a “good voice” to come out. What do you mean by “good voice”?
H. R. : Simply put, to me it means bringing out a character’s authentic voice – a voice that sincerely conveys the character’s true feelings and emotions. For example, the workshop from which Happy Hour originated was called a “hearing workshop”, and was based on the idea of creating an environment where real, mutually satisfying communication could happen. In practical terms, we avoided traditional acting lessons almost completely and focused instead on one-on-one interviews.

In Happy Hour – and in other films too – you portray your male characters in rather unflattering ways. They’re often selfish, aloof, sometimes even violent. I wonder why.
H. R. : Really (laughs)? I assure you I don’t do it on purpose. I always try as much as possible to portray my characters in such a way that the audience is free to interpret their behaviour as they want or feel. That said, I probably depict these characters in a negative way – albeit unconsciously – because they can easily be found in real life. In other words, they’re the product of our society.

I’m sure everybody asks you why Happy Hour ended up being more than five hours long. But, actually, you’d already made a very long film before: Intimacies is four hours long. How would you compare these two projects?
H. R. : Time-wise, the main difference between them is that Intimacies is long by design. From the beginning, I wanted to make a long film like this. Actually, the first half contains the process of making a stage play (the two main characters are the directors), and the second half contains the actual stage performance. I made this film as a sort of challenge, totally free of restrictions, and knowing very well this could end up in total failure. Happy Hour, on the other hand, was meant to be a much shorter story. Actually, the first version is only two hours long. It just happened that in the process of creating a script that would be easy to understand, and giving each character enough time to develop naturally, the story became longer and longer. At first, I wasn’t worried because I thought I could always cut it in the editing room, but, in the end, everybody who was involved in the making agreed that the longer version was the better and more accomplished one.

Wasn’t the producer worried about its length?
H. R. : You see, this was a very small project, and the producer – who also happens to be a friend of mine – didn’t complain about the film’s length. So it stayed that way.

After all, it cost relatively little money, so the risk involved was quite small. After such a huge and demanding project, was it difficult to plan your next film?
H. R. : Surprisingly enough, it was quite easy. To be sure, Happy Hour took much longer than I thought to finish, and at the end I was both physically and mentally tired. I’m certainly not going to do something like that again anytime soon. So I looked for something completely different, and I found in Akutagawa Prize winner Shibasaki Tomoka’s novel the perfect story. netemo sametemo (Asako 1 and 2) is a more mainstream film and a more conventional kind of fiction. It reminded me of Tristan and Isolde, and I liked its pace and atmosphere. I hope it’s going to repeat Happy Hour’s critical and box-office success.