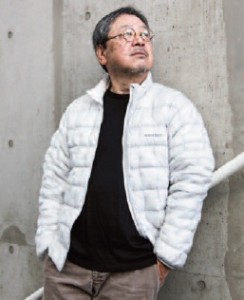 Successful author Yumemakura Baku discusses his work with the mangaka who have adapted it.

Yumemakura Baku is one of Japan’s most famous authors. His work has often been influenced by his travels and personal involvement in activities such as martial arts, and many of his books have been adapted into manga. We met him to talk about his interest in graphic novels and his relationship with Taniguchi Jiro who adapted The Summit of the Gods (Ponent Mon).

I read somewhere that you decided to become a writer when you were ten years old.

Yumemakura Baku: Indeed, but back then writing was one of the many things I was considering doing. Photography was also one of my passions. I’ve never stopped taking pictures, even after becoming a professional writer.

Y. B.: Yes, my father wanted to become a writer even though he never told me. It was only when he died that my mother told me about the aspirations he had when he was young. She even allowed me to read his poems.

When you were in high school, you started to produce your own magazine. What was it about?

Y. B.: I wrote about fantasy especially, or something that resembled it. They were strange stories inspired by folklore and Japanese legends.

Nowadays, it’s easy to get a hold of these kinds of publications in specialist bookshops or at conventions.

Y. B.:At the time, I’d sell them or exchange them. I also produced a magazine with some friends. While most of them were more interested in pure literature, I preferred to abandon myself to science fiction or fantasy. I was sort of an outsider.

When did your interest in outdoor activities start?

Y. B.:They were part of my childhood. I grew up in Odawara, a little city situated fifty kilometres south of Tokyo. As well as reading manga at home, I’d spend a lot of time playing outside. There was a beautiful river nearby and I’d fish there a lot. Every day was another adventure.

I imagine the city of your birth must have changed a lot since then?

Y. B.:Yes. Fifty years ago my house was surrounded with fields of vegetables and rice. I needed to cross them to get to the river. They’ve all disappeared now – it’s become a residential area with very little space for adventure.

You started writing after your studies, but it wasn’t a great success.

Can you tell me more about this period?

Y. B.: I had all kinds of jobs. In the summer I worked in the mountains in the prefecture of Nagano, and in winter I worked in the ski resorts. And in between these periods, I would write. But I also worked as a builder, in public transport, dish washing in restaurants… I needed to adapt to be able to continue writing.

In 1975, you went to Nepal for your first trek in the Himalayas.

Y. B.: Yes. It was the first time I had travelled abroad. I was very interested in the craft of mountaineering, not just notching up summits to climb. To me, conquering mountains or reaching the top wasn’t an end in itself. I enjoyed choosing a valley, setting up a camp and looking for edible wild plants. I would spend a week up in the mountain until I had nothing left to eat and needed to go home.

So mountaineering encouraged you to travel throughout the world?

Y. B.: Yes, I went to many places like Tian Shan in China, Mount Kallash in Tibet and the Himalayas, time and again. Three or four years ago I went to Venezuela to climb Mount Romaima, one of the most famous mountains in the country.

Why did you decide to work with Taniguchi Jiro on The Summit of the Gods?

Y. B.: I simply thought that Taniguchi was capable of adapting the story as a graphic novel. The Summit of the Gods is a story about mountaineers. Tanguchi had already published a manga that was set in the mountains, so I knew what to expect. He has a particular way of drawing the beauty of nature. I like the way he draws snowstorms. He has the capacity to communicate the grandeur of the Himalayas, and turn these little drawings into something just as grand. His style is quite different from the manga and Japanese anime that are so successful abroad.

The Summit of the Gods wasn’t your first collaboration with Taniguchi?

Y. B.: No it wasn’t. Between 1989 and 1990 he worked on adapting Garoden (Kodansha), a series of essays dedicated to martial arts and other forms of combat sports.

In 1996, a second adaptation of these stories into manga was published, but this time it was adapted by Itagaki Keisuke. Why?

Y. B.: It wasn’t what was originally planned. In Japan, most manga are first published as series in magazines. Unfortunately, the magazine in which the first series by Taniguchi appeared was no longer printed. That’s why he was only able to work on the first volume. A few years later I met Itagaki, who was then working on a manga about combat sports. He wanted to revive Garoden, so we decided to work together.

How would you compare Taniguchi and Itagaki’s styles?

Y. B.: The main difference lies in the way they distort and exaggerate features. Mangaka often make use of distortion to caricature. Taniguchi uses it in a realistic context, whereas Itagaki uses it to exaggerate what is really possible. In one scene, for example, you see a man with a metal bar that he’s just ripped off of something with his bare hands. Tanguchi never would have presented it that way.

Do they have very different personalities?

Y. B.: Itagaki is the crazier of the two. He likes to enjoy the pleasures of life. Tanuguchi is the more serious and diligent one. Until recently, he would draw for six hours a day. He doesn’t go out drinking that much, where as Itagaki likes to hang out in bars to drink and chat. However, that doesn’t mean to say that he neglects his art.

Garoden works on different styles of combat sports from karate to wrestling. Which one of these sports do you prefer?

Y. B.:When I was writing the book I was most interested in wrestling, but now I’m increasingly interested in the Ultimate Fighting Championship.

Moving back to the Summit of the Gods, the two mountaineers that you describe in the story were inspired by two Japanese mountaineers: Hasegawa Tsuneo and Morita Masaru. Why did you choose to tell their story?

Y. B.: Initially I wanted to create fictional characters. The problem is that in the mountaineering world, everybody knows who was first to climb such and such a summit and in what circumstances, so nonfictional characters wouldn’t be very realistic. That is why I turned to real characters for these particular ascents. When I had finished researching, I picked Kato Buntaro as a model, but his personality didn’t really fit with what I had in mind. That is when I realized that Hasegawa and Morita were perfect because they were rivals. It was much easier to develop a story from that.

Taniguchi explains how his creative process is all about when ideas start to develop bit by bit while he is in idle contemplation, but what is it like for you?

Y. B.: I’d say it’s the same for me. Writing is rather like manual work. You throw down onto paper all the ideas you have in your mind. The most exciting part is sorting out everything that’s whirling around in your head. I love that moment.